On Feb. 24, Chicago Mayor Rahm Emanuel is up for re-election.

Emanuel has out-fundraised his closest challenger almost 30-to-1 and has benefited from an improved approval rating thanks to a barrage of TV campaign ads, but some still believe the mayor remains vulnerable due to voter anger over the mass closing of some 50 public schools and half the city’s mental health clinics, Chicago's increased shooting rate, and other issues.

Cook County Commissioner and mayoral challenger Jesus “Chuy” Garcia is one of the believers.

Garcia entered the race late, declaring his candidacy in late October after fiery Chicago Teachers Union President Karen Lewis suspended her own campaign due to health issues. In fact, it was at Lewis's insistence that Garcia launched his campaign.

In the weeks since that decision, Garcia has built an impressive operation and gained some traction, if not fundraising. Among four candidates to attract more than 5 percent support in the latest major poll on the race, Garcia drew 18 percent of respondents, second only to Emanuel's 42 percent. Twenty percent of Chicago voters remain undecided.

If voter turnout in Chicago mirrors that seen in last November's election, Emanuel's challengers — who also include Alderman Bob Fioretti and entrepreneur Willie Wilson — face an uphill climb to the fifth floor of City Hall. But a two-person run-off, required when no mayoral candidate earns 50 percent of the vote, is possible. In 2011, Emanuel avoided a runoff with 55 percent of the vote.

Garcia, 59, sat down with The Huffington Post to explain why he thinks this time will be different.

The Huffington Post: A Reuters article recently labeled you an “underdog” in this race. What do you make of that title?
Jesus “Chuy” Garcia: I relish the label of an underdog because I believe that’s been sort of a frame from the first time I ran for elected office as ward committeeman when I was 27 years old, and I won that contest by 59 votes. When I ran for state Senate folks thought it was a long shot, but I won it. When I ran for [the county board], after being out of politics after the state Senate, I decided to run five days before the last day to file and I came in and surprised everyone and I beat a 15-year incumbent [Joseph Mario Moreno] in three months, so I’ve done it before.

I’m used to adversarial conditions and coming out a winner. I like the idea of a fight. We’re matched against big money but remember, he’s already spent $5 million trying to inch up to the threshold he needs to get re-elected without a runoff. He’s not going to achieve it.

HP: Karen Lewis said she had to “twist your arm” to convince you to run.
JG: She says that in a jesting manner, a playful manner, just like when I went to visit her after she came home from hospital, I said I wanted to take a picture of her stitches so I could show people that she had had the surgery and that she’s tough and earned some additional stripes of merit. When she popped the question and the challenge that I seriously needed to consider running, I shared with her that I was at a really good place at this time of my life.

HP: Why was the decision so hard and what changed your mind and convinced you to go for it?
JG: First of all, I was cruising unopposed to a re-election effort at the county board and that this was the first time ever in all my 13 outings as a candidate that I ran unopposed. I was looking forward to getting a chance to read books that are stacking up, check out a few movies, walk my dog and enjoy the grandkids, so I‘m like, 'Why are you ruining the party, Karen?' That's what she was getting at, that accepting the challenge was going to entail a huge sacrifice. It was going to be a life changer and it needed careful thought by myself and my family. 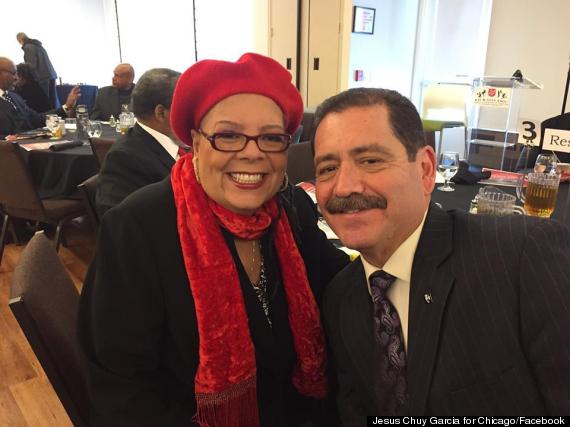 HP: Still, some people have questioned, given the level of fundraising and the perception of your initial hesitation to run, how serious you are about this campaign. How do you respond to people who question your candidacy like that?
JG: I don’t think they’re looking deeper at my history. I’m not your conventional politician. I’ve been in the trenches, seeking to come up with strategies to improve communities and solve issues in a serious way both as an organizer as a community builder. I’m someone who’s been involved with philanthropy supporting the most effective and impactful organizing groups in the Chicagoland area. As a public official, I haven’t gone the conventional route of Chicago politics. I’ve been a progressive, consistent reformer and coalition builder. I don’t think any elected official has been in more picket lines in labor causes than I have. I think that opinion tends to be superficial.

HP: What do you think is the biggest issue for Chicago voters in this race?
JG: I think people want a mayor who is going to be a real listener and who cares. People feel alienated from Mayor Emanuel. They feel that he thinks he knows all the answers to all things and that there is a sense about him that they don’t share, a quality, and that is the aloofness and the arrogance about knowing more than what Chicagoans know. I think that strikes them very negatively because they’re the Chicagoans. They’ve lived in this city, they know what it’s like to work, to struggle to raise a family, to endure the day in and day out of living in Chicago’s neighborhoods, the good times and the bad times.

People are hurting from the recession. People feel that they’re not progressing, that their incomes have lost ground or stagnated and they also see that a small sector of the city has done fantastically well and they haven’t. They want the prosperity that they see around them to arrive to their household and to their neighborhood and they want a sense of helping to shape the direction the city moves in.

HP: You’ve said you want to hire 1,000 new cops in Chicago. How would you pay for that and how would you deploy them? And how do you respond to those who say the city doesn’t need more police given all the issues with community mistrust in the department?
JG: My proposal to hire additional policemen and women is not simply to have them driving in cars with the sirens and lights flashing, because that doesn’t provide sustainable security for communities. We haven’t had community policing in Chicago. We took one first step with the CAPS [community policing] program and beat meetings that occurred, but we didn’t follow through to create a more robust approach and we need to do that. If we learned anything from Ferguson and New York City, it’s that there’s a great gulf of separation and a lack of trust and mutual respect between residents and police officers and that’s why community policing will help ensure we begin to narrow that. We’ve really gotten away from community policing and it needs to be brought back.

HP: There have been serious questions raised in multiple media outlets about the Chicago Police Department’s crime statistics and accusations that certain numbers are doctored. (Ed. note: CPD has called such reports "absurd," "false, misleading and unsubstantiated," while the outlets have stood by their reporting.)
JG: i think it’s to a good degree representative of the [Emanuel] administration. The police superintendent works at the pleasure of the mayor and there are certain imperatives that come with that. You’ve got to do what the mayor wants says and toe the line. It’s no secret if you talk to police officers, they’ll tell you that there’s a sense that the numbers are not accurate, that they’re fudged and that everything is to get to a re-election of the mayor.

HP: How would you address that level of scrutiny and mistrust in the department?
JG: The Chicago magazine article reported on how crimes are reported or not reported and how one shooting incident where five people shot is reported as one -- it’s killing crime through the lens of how the numbers are arrived at. Officers, because of the use of overtime, are suffering from burnout and a lack of motivation to engage in a different type of policing. They feel understaffed and it creates more fatigue and I think it takes a toll on the quality of patrolling that occurs. It’s not a good time at the police department, I would say. 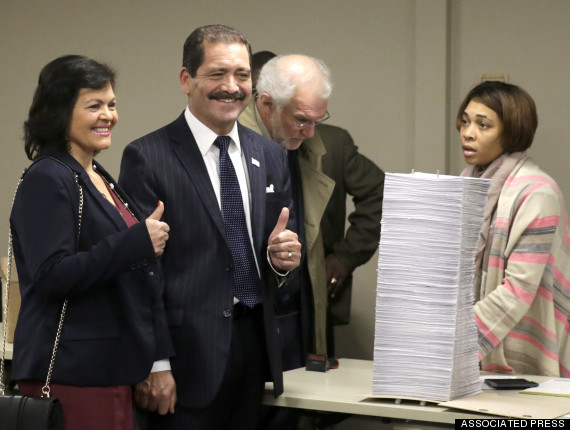 In this Nov. 24, 2014 file photo, Garcia, second from left, and his wife, Evelyn, give thumbs-up after he turned in his nominating petitions at the Chicago Board of Elections in Chicago. (AP Photo/Charles Rex Arbogast, File)

HP: Emanuel is a supporter of a controversial mandatory minimum sentencing state bill [for crimes involving illegal possession of firearms] and has pushed aggressively for it, as has Police Superintendent Garry McCarthy. Do you back the proposal?
JG: I support strong sentences for individuals who are convicted of using a gun committed in a crime. The sentencing bill he has supported I think continues the thrust of disproportionately incarcerating young people of color and I don’t think that’s good. I think he’s using it to show he’s “tough on crime” but the repercussions for the future are counterproductive. That’s why most of civil rights groups oppose it and that’s why people who have been looking for solutions to improve the quality of life for young people oppose it. It will send more people to jail unnecessarily. This bill is wrong-headed.

HP: When was the last time you spoke with Rahm Emanuel? What did you speak about? [Ed. note: Interview was conducted prior to a Jan. 27 debate hosted by the Chicago Tribune editorial board.]
JG: I bumped into him at a 5k run on a Saturday morning in early November of 2014 in West Englewood and shook his hand. That was the last time that we exchanged any words. We were both cordial.

HP: So, no swearing or anything like that?
JG: Too many people around. [Laughs] And the media.

Interview has been edited and condensed for brevity.