On Tuesday, Chicago Mayor Rahm Emanuel was dealt a surprising result in his reelection bid: Despite a massive campaign war-chest and the backing of President Barack Obama, he fell short of the number of votes he needed to avoid a runoff election against his closest rival.

As a result, Cook County Commissioner Jesus “Chuy” Garcia has been thrust into the national spotlight. But who is this man, responsible for forcing an incumbent Chicago mayor into an runoff election for the first time since the city implemented its current election structure in 1995?

The 58-year-old was born in a small village in the Durango state of Mexico. His father worked in the states as part of the “braceros” program, and his mother stayed behind to raise him and his three older siblings, the Chicago Reader reported in its lengthy profile of Garcia. In 1965, at the age of 10, Garcia and his family moved to the west side of Chicago, where his father was working at a plant. He's been there ever since.

He first ran for elected office as ward committeeman at the age of 27, after graduating from the University of Illinois at Chicago, and won by 59 votes.

He was an underdog then, and many pundits considered him an underdog now, Garcia explained to HuffPost in a January interview, in which he accurately predicted Rahm would not avoid a runoff.

“I’m used to adversarial conditions and coming out a winner,” Garcia said at the time. “I like the idea of a fight. We’re matched against big money but remember, he’s already spent $5 million trying to inch up to the threshold he needs to get re-elected without a runoff. He’s not going to achieve it.”

Garcia later went on to serve on the Chicago City Council and the Illinois State Senate. When he was defeated in the Democratic primary election by a candidate backed by former Mayor Richard M. Daley, he worked as executive director of the Little Village Community Development Corporation, a nonprofit now known as Enlace, which he helped found. He was then elected to the Cook County Board in 2010 and served as the floor leader.

On the issues, Garcia has criticized Emanuel on violent crime, education policy — specifically the mayor’s continued backing of the city’s school board being appointed rather than elected — and privatization.

“I think people want a mayor who is going to be a real listener and who cares,” Garcia told HuffPost in January. “People feel alienated from Mayor Emanuel. They feel that he thinks he knows all the answers to all things and that there is a sense about him that they don’t share, a quality, and that is the aloofness and the arrogance about knowing more than what Chicagoans know. I think that strikes them very negatively because they’re the Chicagoans.”

Garcia has vowed to hire 1,000 new police officers, reopen schools and push the Illinois state legislature to change Chicago's school board into an elected body -- a move favored by almost 90 percent of the voters who considered the matter Tuesday. He's offered little in the way of detailed plans on how he'd approach the cash-strapped city's budget, however.

If Garcia is going win in April’s runoff election, pundits say he needs to build support in the city’s African-American neighborhoods, where he was outperformed by Emanuel. He also needs to up his fundraising, having raised only $1.4 million to Emanuel’s almost $15 million in the race to date. 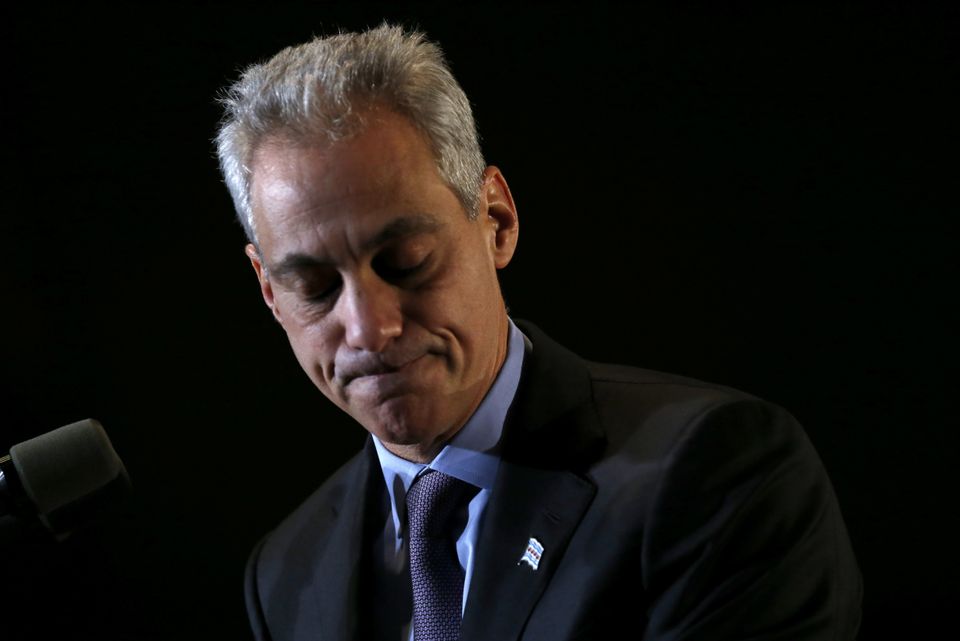 1 / 14
Chicago Mayor Rahm Emanuel pauses as he talks to supporters after he was unable to get a majority vote in the Chicago mayoral election, forcing a runoff election in April against Jesus "Chuy" Garcia. Tuesday, Feb. 24, 2015, in Chicago. (AP Photo/Charles Rex Arbogast)
ASSOCIATED PRESS