As unforgettable yet controversial images go, it's hard to top the one made by artist Cedric Chambers.

His painting, "The Prophet," shows Darth Vader carrying Jesus Christ with the smoldering images of the Twin Towers in the background.

Looking at it, you might think the 23-year-old Denver artist had managed to offend three separate but equally passionate groups: Christians, New Yorkers and Star Wars fanatics.

But you'd be wrong. At least about the Christians and Star Wars fanatics.

"The main criticism has been from New Yorkers," Chambers told The Huffington Post. "For the most part people love it, especially older people -- those between 35 and 45. They see it as a conversation piece."

Chambers painted the original last November and sold it for $800 a few months laters.

Now he is selling prints on eBay to people who presumably want to start a conversation about how to mix pop culture with sacred imagery and tragic events like 9/11.

Originally, Chambers planned to have Jesus carried by evolutionary biologist Charles Darwin, but "a force" compelled him to do Vader instead.

"Somehow, Darth Vader came to mind and it worked because he's such a messianic figure," he said.

Unlike George Lucas or God, (who presumably wrote the New Testament after the Old Testament became a big hit) Chambers has no interest in doing a sequel.

"I think trying to reuse the same idea another time just degrades it," he said. 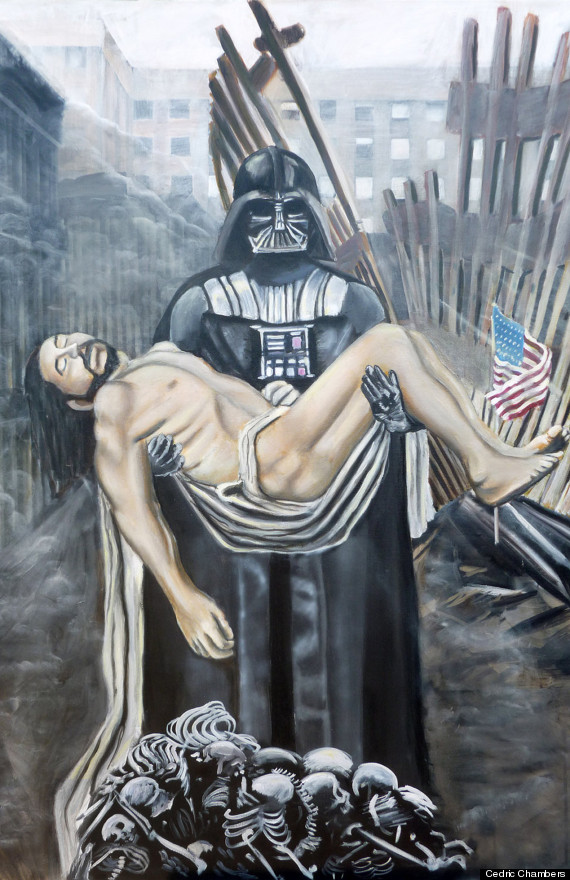