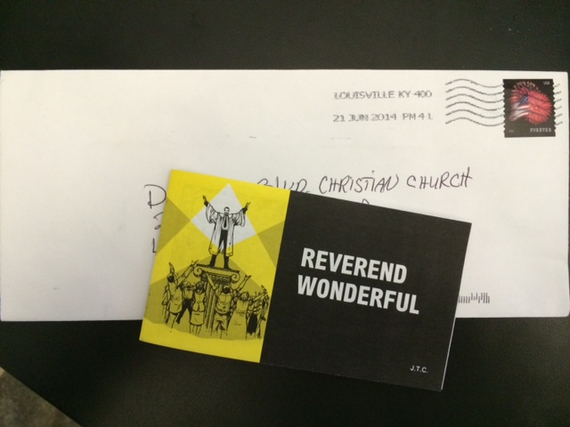 Jesus is the worst thing to happen to Christianity in awhile.

Want to know how I know?

I got another anonymous letter sent to me today. Actually, it wasn’t a letter at all; it was a tract. Turns out, they still make those. (Which makes sense, because who hasn’t been confronted by a second rate black and white cartoon carrying the grim warning of impending damnation, then fallen down in a tangle of wayward limbs and humiliated repentance?)

The title of this magisterial work of theology? Reverend Wonderful.

In it our protagonist, the sardonically named, Rev. Wonderful (Haha!, Get it? ’Cause he’s really not “wonderful?”) enjoys the untempered adulation of the adoring masses. He’s introduced as the "most loved man in America.

So what makes the “Reverend” so “Wonderful,” so nationally beloved and respected? He’s theologically liberal, of course. (Because, you know, all the famous preachers are liberals. They all have megachurches and television empires and political machines.)

Unfortunately, though, it’s precisely his theological liberalism that leads God to run Rev.’s sorry butt back through the pearly gates and cast him “into the lake of fire forever.”

So, you might be wondering just what is this liberal poltroon’s great sin against God and the Christianity on behalf of which this tract offers its voice? What has consigned the Reverend to eternal perdition? Why, it’s his preaching, of course. Just listen to the evil spewing from his mouth:

“Yes, God cares about souls, but He [sic] also cares about SOCIAL JUSTICE … the poor and needy! We must UNITE to fight ignorance and bigotry” [emphasis in the original].

That’s right. R.W. gets crosswise with God because he can’t, as Stephen Covey suggested, “keep the main thing the main thing.” Instead of spending his time out hawking Christian bumper stickers and waylaying the unsuspecting with the middle school aesthetic of evangelistic tracts in an effort to “get people saved,” he foolishly pays too much attention to “the poor and needy!” No wonder God has to ice the guy! I mean, come on. All that soft-hearted liberal Jesus-y stuff be damned.

The tract I received in the mail today represents, admittedly, a somewhat caricaturized version of Christianity. But let’s be honest, it is a popular version of Christianity--one in which following Jesus’ commandments about doing “unto the least of these” is seen as a distraction from the true thrust of Christianity, which has to do with making certain that people believe the right things and that they allow Jesus into their hearts. The inescapable irony in this dismissal of tending to the needs of those on the margins is that when Jesus talks about judging those who will “go away into eternal punishment,” he never mentions as a reason for their condemnation any failure to “ask Jesus into your heart.” Instead, when Jesus speaks most powerfully about sitting in judgment on the nations, he reserves his ire for precisely those who fail to care “about SOCIAL JUSTICE … the poor and needy” (see Matt. 25:41–46).

So, back to my original assertion: Jesus is the worst thing to happen to Christianity in awhile. He has a way of completely screwing with a popular view of Christianity in which what’s thought to be important is the finely calibrated modulation of the individual soul, rather than the “works righteousness” involved in actually living like Jesus said to live.

Jesus can’t help but be a disappointment to Christians who would rather not be bothered with the world God created -- the one with traffic jams and dirty socks, with ballet and waterfalls, with love and generosity, with the poor and needy -- than with the one to which they’ve been promised platinum membership passes at some future eschatological reckoning.

No, if you’re committed to a Christianity in which God is opposed--decidedly, angrily, cast-you-into-the-eternal-lake-of-fire-forever opposed--to any ecclesiastical effort to “UNITE to fight ignorance and bigotry,” the Jesus you find caring for the the poor and needy in the Gospels is going to pose an insuperable obstacle to your Christianity.

The Reverend Wonderful would never say it (because apparently, he’s too inoffensively nice), so I will: Jesus is the worst thing to happen to Christianity in awhile. But I suspect the poor and needy are just fine with that.