I like girls. It's true. But for a long time I lived an average, heterosexual life in a very suburban, heterosexual town in Orange County, Calif. My sisters both got hitched at a young age, but I was happy being a single gal on the prowl. My friends even made me a "make-out bandit" t-shirt that I wore with pride.

Now, who's to say when it really began, but I can remember distinctly a time when a bunch of us ladies were gabbing in a friend's jacuzzi, talking about sex, of course, because we were in our 20s and world affairs just simply did not apply to our lives. It came out that a few of the women had kissed or made out with other women in the past. I was shocked, truly, for I had been taught that if a girl kissed another girl, she was gay. And none of these women were gay. I played it cool, not wanting to admit that I was confused or felt left out.

Needless to say, I kept thinking about it. Here I was, a 24-year-old hairdresser surrounded by über-fun and, in my eyes, "wild" women, wondering if I should maybe try kissing a girl, too. Spurring these thoughts on even more was the fact that I had a smoking hot co-worker with amazing legs and a sexy laugh. She ended up moving in with my close friend, and the three of us soon began hitting up bars and dance clubs outside our town. And then, it happened. My first girl kiss was fun and fantastic and intimidating and foreign. But fun. Afterward, things stayed platonic between me and my voluptuous co-worker, and I kept dating the various boys whom I encountered. Life continued.

Then a little while later, I had my second girl kiss. And my third. And my fourth. But this time, they were all with the same girl, who happened to be my best friend, who was also a co-worker, who was also "straight." And when things progressed, I was stricken by an anxiety unmatched by anything I had ever felt before. When you fall in love with someone, it usually feels euphoric and sexy and exciting. Sure, there are moments of worry, but it is all part of the electricity involved. I wanted to feel all of those things, but instead I was riddled with a sickening guilt; I found myself fighting my feelings and wanting things to "go back to normal." I had no one to really talk to; my parents were stressed, and I was afraid that if I went to my friends, they would start hurling Bible verses my direction. And God? I was afraid to tell Him, too.

Yeah, you read it correctly. God. To turn back time a little and fill you in, just months before, my little sister had left her husband and fallen in love with her best friend -- a woman, a co-worker who was also "straight," whose parents attended the same church as my parents. While I argued my sister's case to my parents and to my pastor, proclaiming that Jesus still loved her and us, I felt conviction. We lost a few friends, and we fought with our parents and older sister, but I stood by her and did not back down. And yet, when it came to my own feelings, I had trouble standing.

So I prayed. I prayed, I wrote poetry, and I waded through my brain, trying to decipher real truth and God's truth from the "truth" that was preached to me and ingrained in my child's brain. When you have attended a Christian church for your entire life, when you were raised in Sunday school, there are a lot of teachings branded on your mind that you may not even realize are there. I lost weight, succumbed to insomnia, and finally accepted that this was one area in which I would not have control. When I came out the other end of the dark and narrow soul-searching tunnel, my best friend was waiting for me. My second girl kiss became my first girlfriend, and we continued to fall more in love.

And God never abandoned me. My Christian friends, on the other hand, were not as open-minded. I ended up dropping out of my Bible Study, which breaks my heart to this day, and eventually leaving my church. I became a full-fledged Judith (which is our term for "lesbian"), although I suppose I considered myself to be more "bi" than anything. My little sister and her best-friend lover were married a year ago in southern California. My parents attended the wedding, but our older sister did not. I still love Jesus, and I know that Jesus loves me, and my sister, and has never stopped loving us once (no matter what people said to my face).

After much time had passed, I finally sat down to write my story. But every time I reread my chapters, I felt sad. Of course, there were a lot of hardships in the process, but it was also really fun! And funny. And silly. I wanted to create something that could share my story and my sister's story and be about Jesus but also about foraying into the world of lesbian sex and all its mysteries. And so my webcomic was born. I hired an amazing illustrator, who has helped me create this collection of memoirs and who draws my vision of Jesus and my dogs and a double-headed dildo with the same ease. I'm hoping readers will laugh, will hurt, will relate, and will contact me with their own struggles with sexuality and faith or both. The "chapters" are published bimonthly online at jesusloveslesbianstoo.com.

Check out a few pages below: 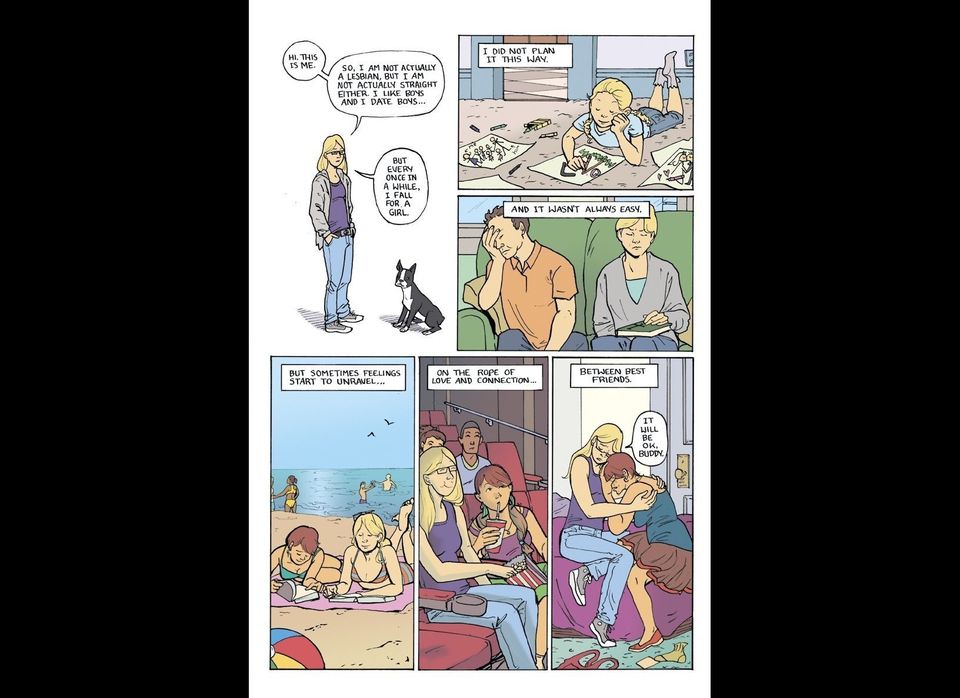