Christopher Lomelin, who just earned his B.A. in Latin American Studies at VCU, co-authored this piece.

While many Americans are now familiar with Santa Muerte, her less known paisano or compatriot, fellow Mexican folk saint Jesús Malverde is increasingly visible on both sides of the border. Some might have seen him in AMC's Breaking Bad. In an episode entitled "Negro y Azul," a DEA agent who keeps a Malverde bust on his desk to "help him know his enemy" refers to him as the patron saint of drug dealers. Others might have tried the Mexican beer named in his honor. In fiction and news media, Malverde is often depicted as simply the patron saint of drug traffickers, or el narcosantón. Such portrayals are simplistic, however. Absent from these representations are Malverde's appeal to the poor, the handicapped, construction workers and migrants. While he is more commonly known as as el narcosantón to outsiders, to his hundreds of thousands of devotees he is el ángel de los pobres, the angel of the poor.

According to legend, Jesús Malverde was born Jesús Juárez Mazo on December 24, 1870, just outside Culiacán, the state capital of Sinaloa. During Malverde's youth, railroads arrived in Sinaloa bringing large-scale hacienda agriculture. The profits of hacienda agriculture were enjoyed by the few elite while the vast majority of the population, the peasantry, faced even greater economic strain. Malverde is said to have been a carpenter, tailor or railway worker during this period of rapid socioeconomic transformation. It was not until his parents died of either hunger or a curable disease (depending on the version of the story) that Malverde turned to a life of banditry.

Malverde quickly earned a reputation as el bandido generoso, the generous bandit who stole from the rich and distributed the plunder to the needy. In the most popular version of the Malverde legend, the governor of Sinaloa, Francisco Cañedo, personally challenged Malverde to steal his sword or daughter, promising that if successful he would be granted a pardon. Malverde passed brazenly through the governor's mansion like a ghost and left a note stating "Jesus M. was here." Humiliated, the governor ordered him hanged with his arms tied behind his back. As a show of force, local authorities refused to allow Malverde to be buried and his body was left hanging until the bones fell to the ground. Over time, peasants threw small stones towards his remains as a sign of respect, eventually covering the body.

The tragic death of Jesús Malverde is the most important aspect of his legend. Very little is known about Jesús Juárez Mazo, other than his execution. What is clear are the similarities shared between Malverde and two famous Sinaloan bandits, Heraclio Bernal and Felipe Bachomo. Malverde seems to be a synthesis of these two historical figures, while the execution of Jesús Juárez Mazo can be seen as the catalyst for the development of the folk devotion. His death at the hands of corrupt authorities appeals to the marginalized because they are vindicated through his victimization. Although the marginalized of Sinaloa lost a hero, they were compensated with a folk saint who has the power to work miracles.

Most Malverde devotees are from the underclass of Sinaloa and northern Mexico In the mustachioed saint they see a supernatural version of themselves. Alms collected at the Jesús Malverde Chapel in Culiacan are often used to purchase wheelchairs and crutches for the handicapped, as well as for caskets for those who can't afford them and even free breakfasts for hungry local children. The majority of petitions to Malverde concern health, money, family problems, unrequited love, employment, educational challenges, legal setbacks, arrest, imprisonment, crop failures and business difficulties. Malverde protects and helps all those that need it, regardless of social standing.

The association of el ángel de los pobres with the drug trade began as a deliberate public relations strategy by the regional cartels. During the rise of the Mexican drug cartels in the 1980s and 90s the popularity of the Malverde cult skyrocketed. Association with Malverde allowed certain drug cartels to appropriate his Robin Hood-like characteristics to their criminal enterprise. Investment in community infrastructure on the part of the drug gangs coupled with the government's reputation as corrupt and absent contributed to this populist image. It is advantageous for narcos to appear as though they are simple, faith-filled folk

Narco-dollars have brought more than jobs and infrastructure to Sinaloa. They revitalized and reinforced old customs, one of which is the veneration of folk saints such as Jesús Malverde. The influx of drug money to the cult of Malverde has led to an explosion of chapels across Mexico and even into the U.S. and Colombia, but the macho folk saint's deepening ties to narco-culture has created serious problems for devotees. In many instances law enforcement on both sides of the border assume that Malverde images are an indicator of involvement with the drug trade.

What is lost in many accounts of Jesús Malverde is the relationship between the saint and devotee. It is one of reciprocity in which devotees make a promise to Malverde, often involving a material gift left at the shrine. Malverde is then expected to deliver on the promise. However, if devotees fail to comply with their part of the contract, the miracle is inverted into a curse. The material goods brought by devotees are stored and distributed to the needy on the anniversary Malverde's death.

The very essence of Malverde's sacrality lies in his background as a man of the people. His devotees identify themselves in his image; his power is sourced from the suffering endured by his followers. Although mythically constructed, Malverde's own struggle for existence in a society defined by injustice created a hero in life and a saint in death for the marginalized of Sinaloa and northern Mexico. Between ordinary devotees hoping for an everyday miracle and narcos seeking protection and profits, the cult of the mustachioed Sinaloense will continue to flourish on both sides of the border.

PHOTO GALLERY
Jesus Malverde: Not Just A Narcosaint
Download
Calling all HuffPost superfans!
Sign up for membership to become a founding member and help shape HuffPost's next chapter
Join HuffPost 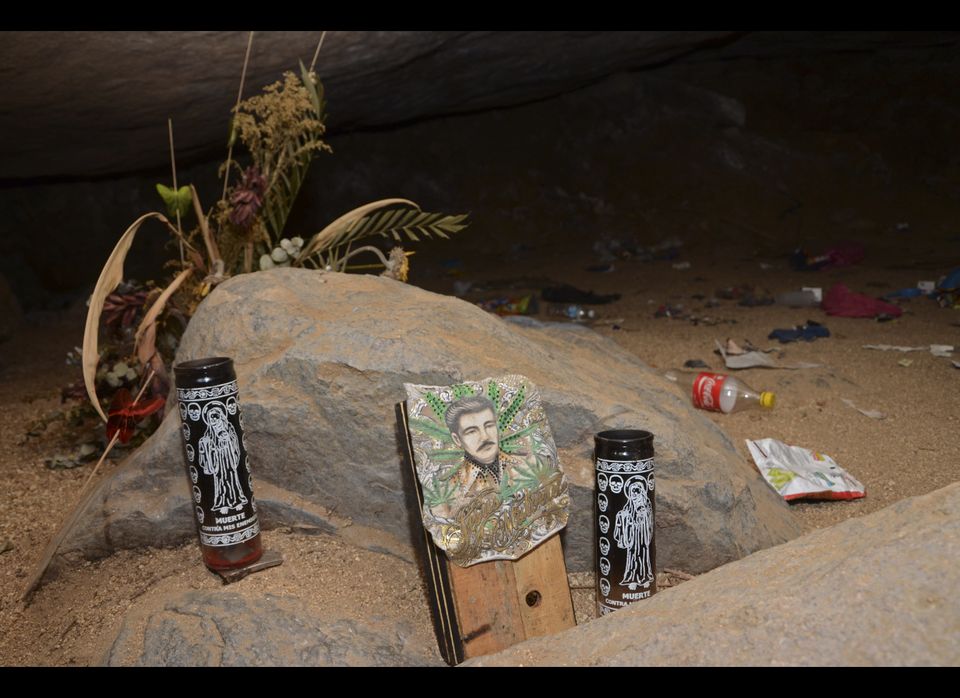 1 / 12
Death in Acapulco
A stone with candles depicting the Santa Muerte and and image of Jesus Malverde, stand at the entrance to a cave near where graves were found in the Pacific resort city of Acapulco, Mexico Wednesday June 8, 2011. Police and soldiers will continue searching for bodies on Thursday. (AP Photo/Bernandino Hernandez)
AP