Many of the nation's leading Jesus Thieves convened in Denver last Tuesday to work towards uniting behind the presidential candidacy of Sen. John McCain, a man who used to have the courage to denounce such charlatans. 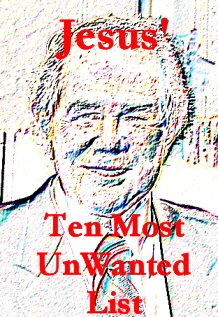 In a gathering reminiscent of the 1957 organized crime summit in Apalachin, New York, some ninety major figures in the rightwing conspiracy to kidnap Jesus and commit identity theft against him gathered in the city where Democrats will nominate Sen. Barack Obama in late August.

Among those in attendance was Tim LaHaye, the No. 4 man on Jesus' Ten Most Unwanted List, which I have compiled in my new book, Grand Theft Jesus: The Hijacking of Religion in America. LaHaye is the co-author of a series of books that have Left Jesus Behind and promote the greater gory of Christ.

Dr. James Dobson, don of the Focus Family and No. 3 on Jesus' Enemies List, was not in attendance, but he was represented by one of his capos.

"Our shared core values compel us to unite and choose the presidential candidate that best advances those values," said the Liberty Council's Matthew Staver, who convened the meeting. Unfortunately, those shared core values are in fact value$ and are, on several points, diametrically opposed to the teachings of Jesus.

The attendees signed a letter urging McCain to consider former Arkansas Governor Mike Huckabee as his running mate. They were careful, however, to characterize their call for putting Huckabee on the ticket a "suggestion, not a demand."

Interestingly, this is the same way they see the teachings of Jesus: "The Suggestions on the Mount."

Some of these pushers of the drug ChristianityLite (Be saved without sacrifice or good works), who loudly say "Jee-SUSS!" so they won't have to do Jesus, are not all that enthusiastic about Huckabee, though. The AP report on the Denver meeting noted that some of them "dislike his populist message, emphasis on the environment and [his] economic positions."

In short, they don't like Huckabee on precisely those issues where he actually heeds the teachings of Jesus -- and suggests policies that might help the least of these and cut into the profits of the money-changers.

Phil Burress, one of those at the Denver meeting, said that the most important thing is that McCain's running mate be "pro-life and pro-family." Those are, of course, code words for being anti-abortion and anti-gay.

"The only evangelicals that will support Obama are the ones who haven't read their Bible," proclaimed Burress.

These Jesus Thieves must be reading a different Bible from the one I have. In mine, Jesus never mentions abortion or homosexuality. He does, however, talk about loving your enemies, turning the other cheek, helping the poor, and how difficult it is for a rich man to enter heaven.

When it comes to the red lines in the Bible -- the words of Jesus -- these leaders of the "Christian Right" read between the lines and leave the red lines unread.

"Obama is a considerable threat to our values," Staver argued. Jesus Followers can only hope he is right, since the value$ of this gang are almost 180 degrees from those Jesus preached.

Wherever two or more of them are gathered falsely in his name, there is hate.

, upon which this piece is partially based.}