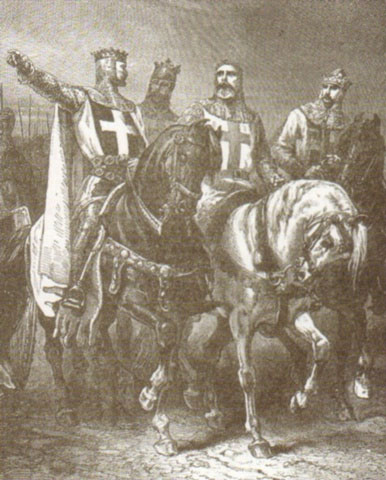 Christians call Jesus the Lamb of God, the Prince of Peace and the Embodiment of Love. These spiritual and humanistic depictions of Jesus, drawn from the Gospels, have attracted billions of devotees to Christianity throughout the ages and have inspired the devotion that continues today.

Yet the history of Christianity is marked by violent acts that do not bring to mind images of peace or love, acts that are antithetical to Jesus' life and ministry and that fly in the face of his most important teaching: "Thou shalt love thy neighbor as thyself" (Mark 12:31).

What inspired the Crusades, the Inquisition, and other violent and murderous acts that defined Christianity over many centuries? Was it lofty images of Jesus and his "love thy neighbor" dictum?

What was Pope Urban II thinking when he initiated the first Crusade in the name of Jesus and Christianity, declaring "God himself will lead them, for they will be doing His work. There will be absolution and remission of sins for all who die in the service of Christ"?

And what of Pope Gregory IX? Did feelings of peace and love drive him to launch the Papal Inquisition and promote the sixth Crusade? Did these Church leaders believe that Jesus would praise their war mongering?

Would the Jewish Jesus have cheered Spain's King Ferdinand and Queen Isabella in 1492 for their hasty expulsion of 200,000 Jews, representing 10 percent of the Spanish population? The king and queen claimed high authority for their orders, supported by "the counsel and advice of prelates, great noblemen of our kingdoms, and other persons of learning and wisdom of our Council." Jews were to "depart and never to return" under penalty of death and confiscation of their possessions.

And which Christian doctrines and image of Jesus drove Martin Luther to urge his followers to set fire to synagogues "and to bury and cover with dirt whatever will not burn, so that no man will ever again see a stone or cinder of them ... to be done in honor of our Lord and of Christendom..." Did Martin Luther think Jesus would applaud this genocidal rampage when the synagogue was his spiritual home ( "And he went to Nazareth where he had been brought up: and, as his custom was, he went to the synagogue on the Sabbath day and stood up for to read" (Luke 4:16)?

Indeed, how would Jesus have responded to the abuse of his name to front violence and anti-Semitism? To tackle this thorny question, in my new book, "Jesus Uncensored: Restoring the Authentic Jew," I create a mock trial in which Jesus testifies against prominent historical figures from the fourth to the 20th century for committing atrocities in his name. He asks these perpetrators to provide citations in the Gospels, other parts of the New Testament, or any additional writings or testimonies about his life that they believe support their crimes against humanity.

Unfortunately, we will never know how the defendants would respond. Would they even dare to justify their acts in Jesus' presence? But the trial does dramatically illustrate that Jesus had nothing to do with heinous acts committed in his name. Perhaps the best expression of that were the emotional outbursts from observers in the visitors' gallery at the mock trial: "Would you have expelled Jesus, Mary, and Joseph -- they too were Jews?" And "Where was the love that Jesus taught -- Jesus is all about love?"