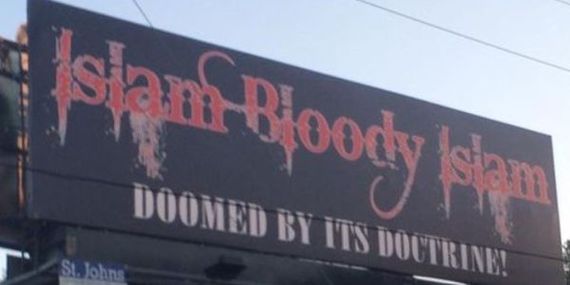 Is this a sign of the future? For those in any doubt whether hatred, ignorance, or intolerance exists in America...here's an example in black and white and red. Are we meant to be taken in by the lurid, blood-dripping visual or the blatantly bigoted language? I for one won't sit quietly by while this sign of hate is displayed in my backyard, my city, or my country.

I live in Saint Augustine, Florida - the nation's oldest continuously occupied European city, the site of the first Catholic mass celebrated on our continent, and the town where Native Americans, Spanish settlers, and free black people co-existed for one brief shining moment. It was also the epicenter of brutal Ku Klux Klan confrontations with non-violent demonstrators in the months prior to the passing of the Civil Rights Act of 1964. Saint Augustine is now witnessing intolerance and hatred yet again. A large billboard recently erected on the major thoroughfare A1A on Anastasia Island in Saint Augustine Beach broadcasts an Islamophobic message which echoes the rhetoric of certain presidential candidates.

The definition of Islamophobia is attributing the actions of an individual or a group of individuals upon the entire population without any distinction. Newsweek ran a story by senior writer Kurt Eichenwald on February 4, 2016 titled 'Right-Wing Extremists Are A Bigger Threat To America Than ISIS' which included this quote, "'Law enforcement agencies in the United States consider anti-government violent extremists, not radicalized Muslims, to be the most severe threat of political violence that they face,' the Triangle Center on Terrorism and Homeland Security reported this past June, based on surveys of 382 law enforcement groups." Even UNC Professor Charles Kurzman and Duke Professor David Schanzer wrote last July in the NY Times that Islam-inspired terror attacks "accounted for 50 fatalities over the past 13 and a half years." Meanwhile, "right-wing extremists averaged 337 attacks per year in the decade after 9/11, causing a total of 254 fatalities."

Yet we continue to see our populace whipped up into near hysteria by those who intentionally link peaceful, mainstream Islam to violent, extremist groups who wrap themselves in the banner of Islam. Malicious misdirection of our attention leaves us scared, blind, and easy prey. Several hijab-wearing residents report an uptick in verbal abuse and physical intimidation when they are out in public, so this 'open-season' on Muslims is clearly impacting their daily lives. Even a Muslim grandmother, born and bred in St. Augustine, sadly accepts the company of her teenage grandson for her weekly grocery shopping! Reverend Ken Wilcox, Senior Minister at the Center for Spiritual Living in Saint Augustine, states, "Our nation was founded on the premise that all God's children are equal and deserving of freedom and liberty. Right now we are seeing the onslaught of fear being fanned by politicians for their own purposes. People of faith are being called to challenge fear with love, hate with compassion, and ignorance with understanding."

A petition, begun by Becky Williams, asking for the removal of the billboard clearly states, "We should always stand up for those in our community who are shown hatred and intolerance. We should be outraged that a billboard with this message could in any way represent our community as a whole." Over 1,500 signatures were collected in less than 24 hours, with some signers also posting comments such as these: "This is a deplorable sight here in St. Augustine. We are BETTER THAN THIS, people! WWJD??--He loves EVERYONE!" "I am completely offended by this horrible hate speak. Take this down! This is not advertising anything but hate." "Jesus would sign this petition." Caren Goldman, Executive Director of Compassionate St. Augustine says, "Members of Compassionate St. Augustine are saddened that this is taking place in our community. Our diverse organization is part of a worldwide network known as the Charter for Compassion International. Locally, CSA includes men, women and children of all faiths who work tirelessly to make our community a more compassionate one through advocacy, awareness and action. In light of the Islamaphobic message expressed on a local billboard, we have strongly encouraged St. John's County residents and others nationally and internationally to sign a petition to remove the message. Our Muslim brothers and sisters are doctors, lawyers, businesspersons, teachers, law enforcement officers, parents, grandparents and children -- who are outraged by acts of terrorism and deeply hurt by blatant Islamaphobia. We stand with them in their sorrow."

In 1961, President John F. Kennedy quoted parliamentarian Edmund Burke who said, "The only thing necessary for the triumph of evil is for good men to do nothing."

What are you going to do?