From Selma to Ferguson, Birmingham to Charleston, Jimmie Lee Jackson to Michael Brown, street artist Jetsonorama is crossing the country from Arizona to New York and a half-century of America's struggle with our legacy of racism and injustice.

As marches have continued across the country in cities like Ferguson, Oakland, Baltimore, New York, Dallas and Cleveland in the past year, addressing issues such as police brutality and racism, the South is taking down Confederate flags on state houses and the U.S. is mourning another mass shooting.

Now as Americans everywhere are pulling out and waving the stars and stripes to celebrate freedom, this new powerful installation on a Brooklyn wall reminds us of what New York poet Emma Lazarus said, "Until we are all free, we are none of us free." 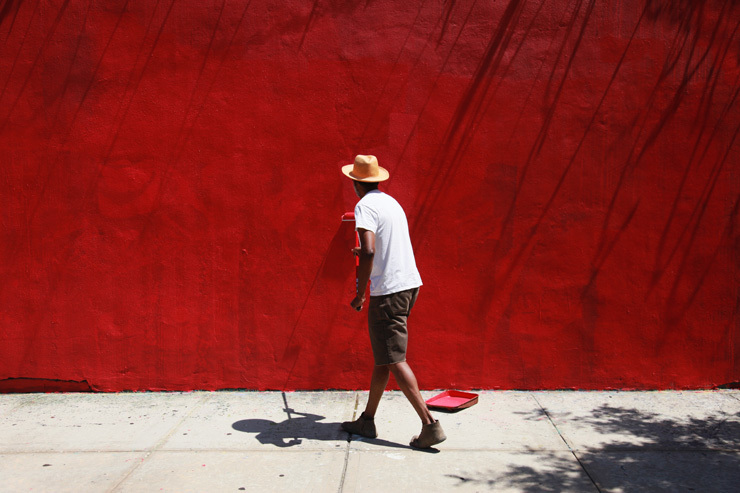 Freedom and equality were the goals of those three marches from Selma to Montgomery, pivotal to the passage of the Voting Rights Act signed into law on August 6, 1965, a turning point in outlawing discriminatory voting practices. But our legacy of racism cannot be easily legislated out of our hearts or institutions, nor extracted from our systems.

In preparation for this new public piece, Chip Thomas aka Jetsonorama told us about his take on the undeniable similarities of the state of the struggle then and today.

"A quote by James Baldwin comes to mind," he says. "'To be a Negro in this country and to be relatively conscious is to be in a rage almost all the time.' Though the times have changed, issues such as institutionalized racism as evidenced by discriminatory law enforcement practices, poverty, high unemployment rates, challenges to voting rights have not. The struggle for respect and equality continues." 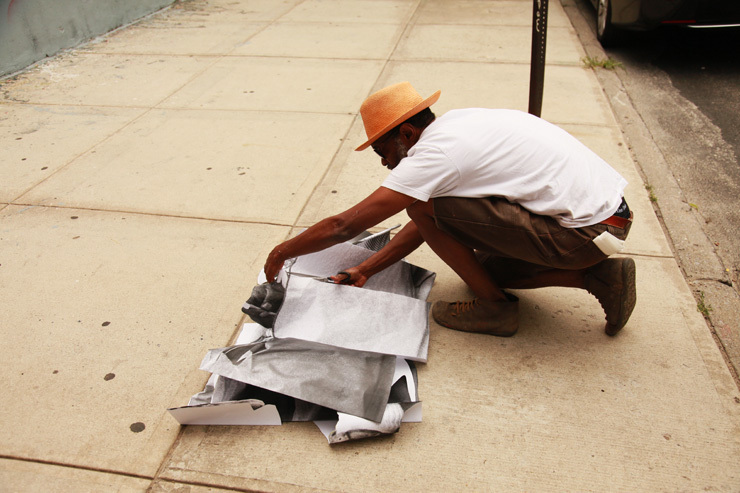 The original photograph by Dan Budnik that he replicates across the wall comes directly from those marches to freedom fifty years ago. "Frederick Moss, a 54-mile core group marcher, rest from exhaustion on Dexter Avenue, the Terminus of the Selma to Montgomery March (25 March 1965)" says the handwritten description of the black-and-white photograph of a young man lying on his back with one hand behind his head and with his other hand balancing a small American flag perpendicular above his stomach. Jetsonorama wheat-pasted that description on this wall as well.

The original image tells of the fatigue and determination of one marcher in a moment of respite, confident and asserting his place at the American table, willing to endure threats, insults, the fear of reprisal. By itself it can also feel solitary, abandoned. 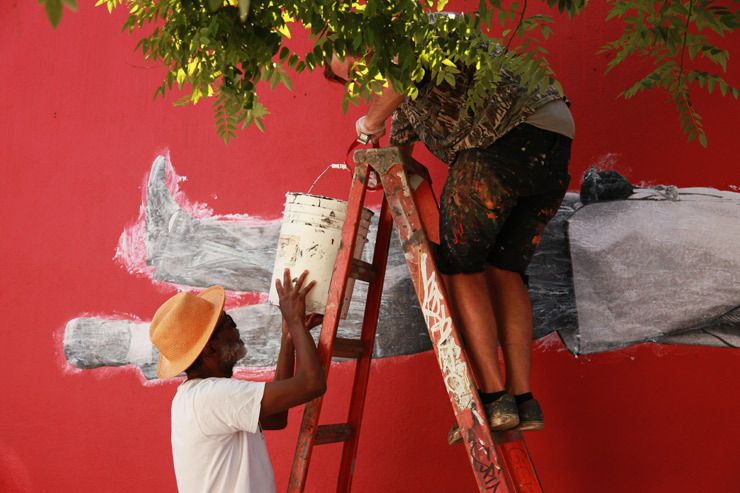 Using the visual language of contemporary art on the streets Jetsonorama ingeniously updates the image through replication and repetition of the silhouetted photographic image, evenly spacing the image across a deep red wall. Like Magritte's "Golconde," Warhol's "Cow Wallpaper," or corporate advertiser wildposting all over our cities, the repeated image evokes the impersonality of the mass production of everything, cheapening a life and lessening its importance.

When multiplied like a mere decorative motif across a diagonal grid it hints at the callous disregard for a huge number of black bodies beaten and bloodied. The addition of a flag calls to mind a graveyard in high contrast, full of nameless lives cut short. The placement also implies that the graveyard extends further than your eye is seeing. 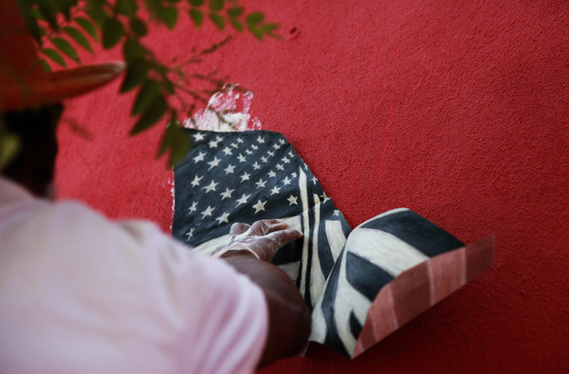 We spoke with Jetsonorama about the genesis of this project which was many months in the making:

On the one hand the 50th anniversary of the marches from Selma gives the events an even stronger resonance. But it may also seem distant from the concerns of a new generation. How do you hope to re-ignite the conversations with this work?

I chose to work with a visual metaphor in this piece. By repeating the image of Selma to Montgomery marcher Frederick Moss who was photographed exhausted, lying on his back in the street at the completion of the march, I'm referencing Eric Gardner, Michael Brown and other African-American men who have died on American streets by the institutions that are tasked with protecting all citizens. I like the fact that Frederick Moss is holding an American flag - emphasizing his status as a citizen who is deserving of equality. and his faith in the promise the flag represents. Granted, most viewers won't know who Frederick Moss is but I think the poignancy of a black man on his back holding an American Flag, ad infinitum, will resonate. 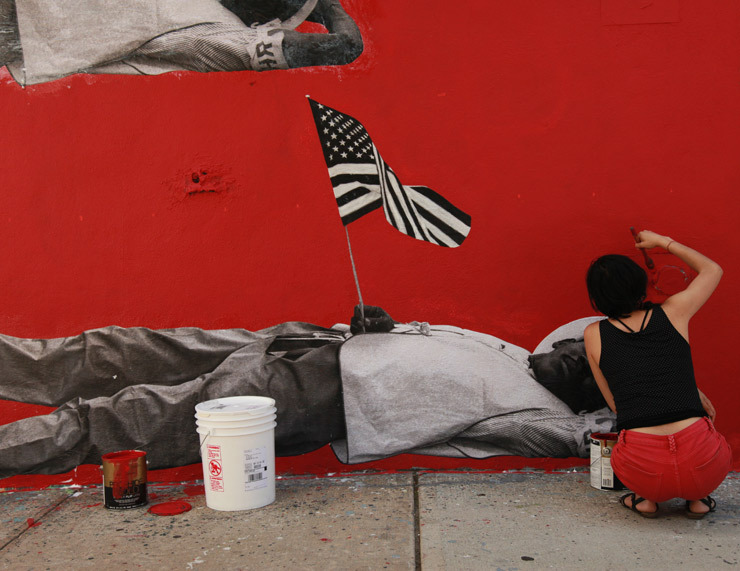 Can you talk about Dan Budnik and his work and why you thought it would translate well to a wall as "street art"?

I was raised in the 1960s reading Life and Look magazines. The work of documentary photographers like Eugene Smith, Gordon Parks, Charles Moore affected me such that when I got my first 35mm camera at age 12, I started shooting black and white film, wanting to be a visual storyteller like them. For 22 years I maintained a darkroom where I live and work now on the Navajo reservation and I became part of a community of photographers based in Flagstaff, Arizona. A long time friend and photographer told me about this guy named Dan Budnik who had moved to Flagstaff.

The first time I met Dan I found him to be an unassuming, gentle spirit. I had no idea of the breadth of his work until a year later when he approached me about wheat pasting some of his work in Selma to commemorate the 50th anniversary of the march. I saw a copy of his book "Marching to the Freedom Dream" that documents approximately three years of witnessing the Civil Rights Movement and I couldn't believe this guy was in Flagstaff. I mean, here was one of the photographers from the humanist photography movement that influenced me - living only 2 hours away. When the possibility of getting work up in Selma fell through I started looking for walls elsewhere to get some of Dan's work from the march up. Dan's images are powerful and timeless. They'd work well in any context. 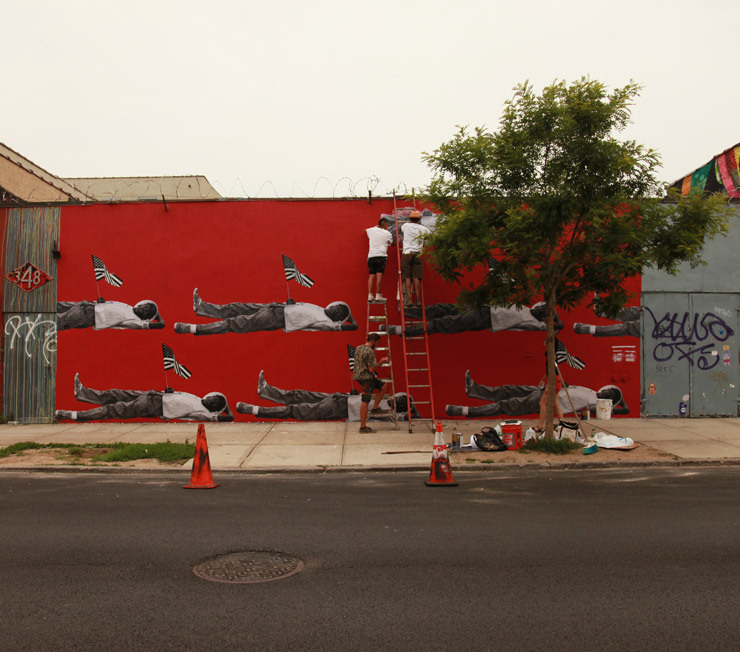 The country is gripped in a conversation about police brutality and its use against communities of color and the poor. How can an artist address such a prevalent systemic racism and classism?

You know, like Bob Marley said, "Who feels it, knows it." I think it's especially true for artists of color that we don't have the privilege of pretending like we're living in post-racial America now that we have a black president. The challenge really is how to get a conscious message out without alienating wall owners (for those people working on legal walls). Personally, I still find inspiration in the utopian ideals of artists like Diego Rivera and the witty criticism of Robbie Conal + Blu who chant down Babylon.

Do you think of this work as appropriation? Collaboration? Repurposing?

It's straight up hip hop and punk in that Dan gave me the source photo and I remixed it. I think of it as a collaboration. Dan saw the mock-up for the piece and was cool with it. 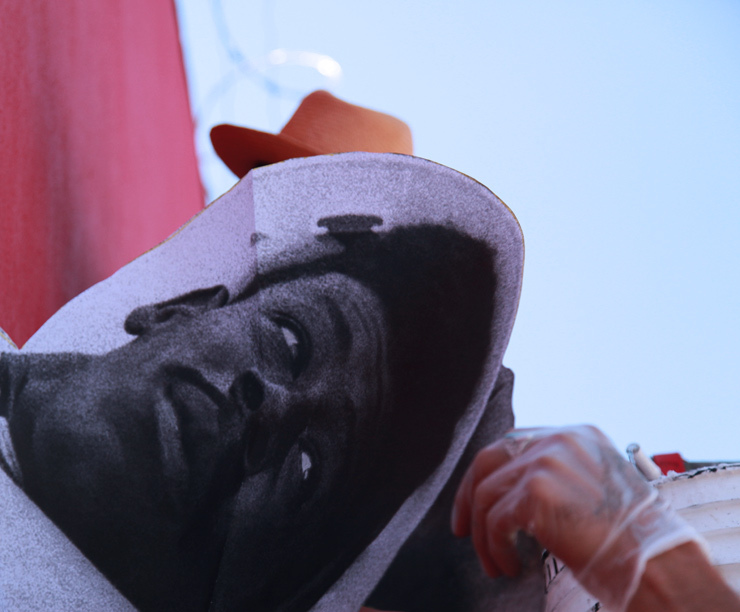 With this topic and Dan Budnik's photographic work, you could have prepared a show in a more formal setting. How does the experience of your art here on the street differ from seeing it in a gallery, museum, or a home?

After presenting work indoors for 22 years I started getting up outdoors in 2009 and haven't looked back since. I started working on the Navajo nation in northern Arizona in 1987 and have been photographing people from the tribe since that time. I've had shows of that work in various places around the county but the people who I was photographing never saw the work. Now that 95 percent of what I do is pasted images along the roadside on the reservation of people from the reservation, the work feels more honest and has deepened my relationship with the community. The dialog with the community and the level of trust have grown through the project.

What do you hope a viewer will take away from this piece?

The piece speaks to parallels and patterns. A successful intervention might be for the viewer to be prompted to recognize patterns of behavior in his/her life and to consider whether those patterns are contributing to or detracting from humanity. On the other hand, not getting tagged would be a good thing. 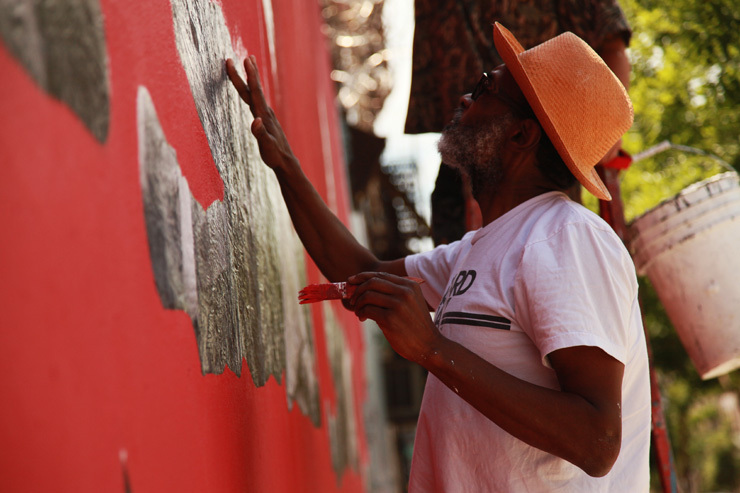 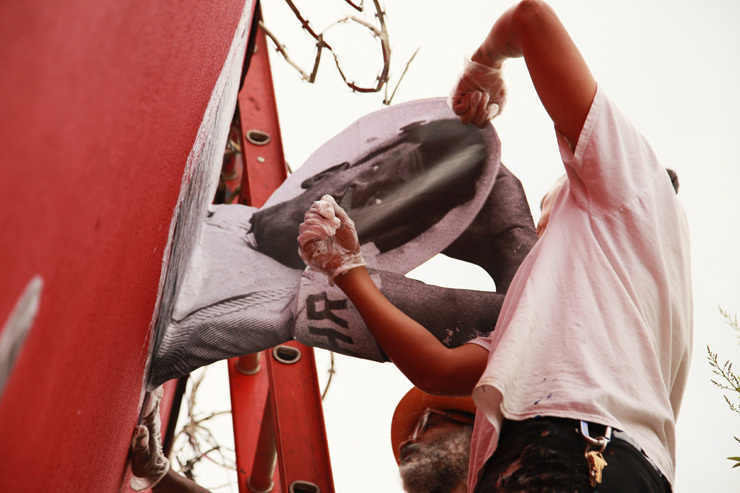 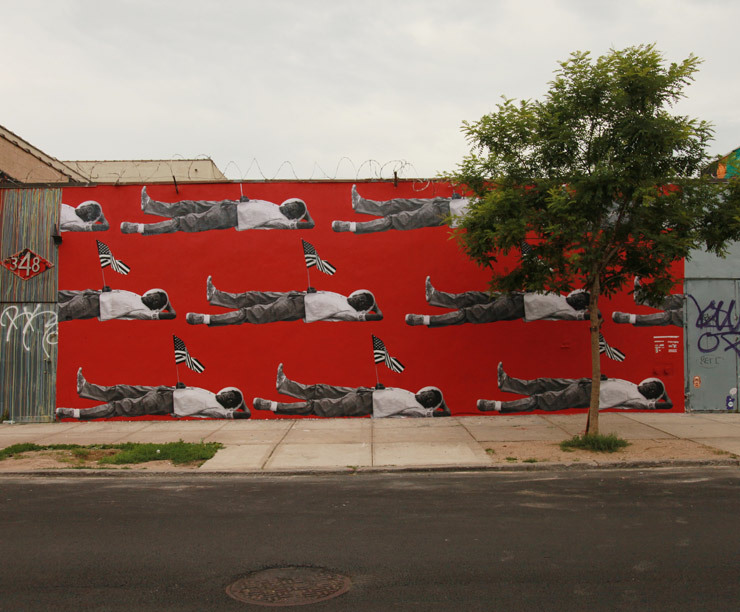 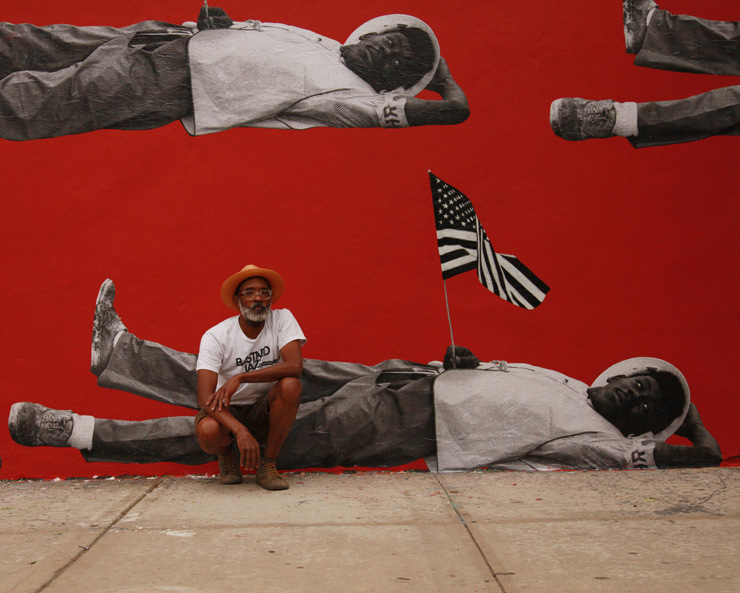 The photo from Dan Budnik is of Frederick Moss. On the caption above, Mr. Budnik explains with his own handwriting the circumstances of the photo. CLICK ON IMAGE TO ENLARGE. The Bushwick Collective. Brooklyn, NY. June 2015 (photo © Jaime Rojo) 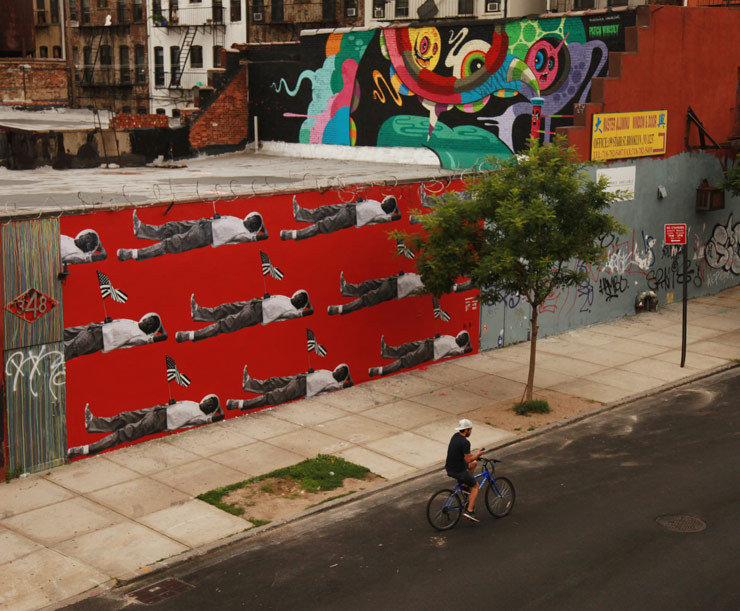 Jetsonorama and BSA wish to extend a heartfelt "Thank You" to photographer Dan Budnik for the use of his photo for this project. Also to LNY, Nanook and Jess X Chen for their assistance and to Joe Ficalora at The Bushwick Collective for facilitating the wall in Bushwick, Brooklyn.