"What we do to the mountains we do to ourselves," says the blocky handwritten text across the Native American activists Klee and Princess Benally, and on the face of it, you're bound to agree with this gently oblique environmental sentiment.

However, at the base of this black, white and crimson red portrait is a far stronger critique of the commercial practice of using wastewater to make snow for ski bunnies. 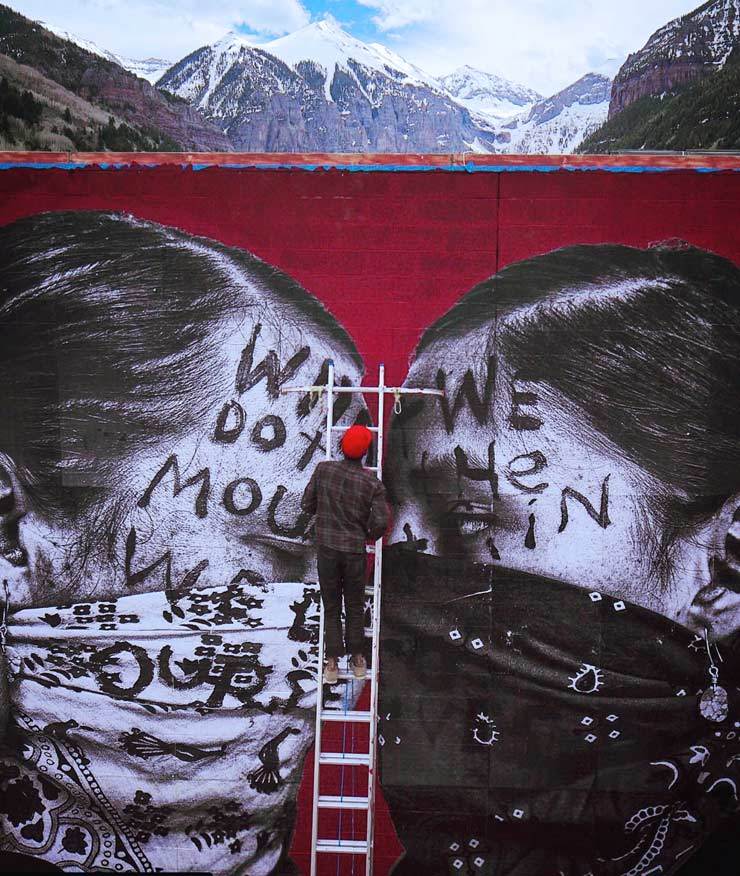 Street artist Jetsonorama (real name Chip Thomas) is on a ladder in Telluride just in time for the famed and prestigious Mountain Film Festival and he says he only has a two-week permit for this mural during the Memorial Day-centered event that kicked off last Wednesday downtown at Sheridan Bar. He seems like he has doubts about locals' ability to stomach a broadside like this piece of art in public space, but he's got a long history of bringing people's history to the people.

It's sort of an irony that a film festival named after mountains in a picturesque Colorado town that is lauded for its views of said mountains may not be addressing this issue more directly. 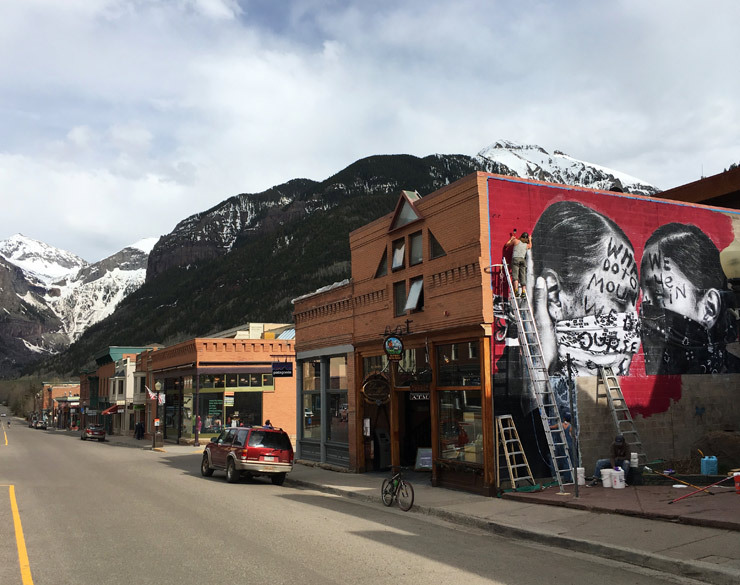 The website for the festival says that it "showcases nonfiction stories about environmental, cultural, climbing, political and social justice issues that matter," and yet it may take a couple of tenderly posed Native Americans wheat-pasted on a prominent wall in a 96% white town to really get the conversation going. The festival is giving the new mural full support however and program director Kate Klingsporn even assisted in the installation and wrote about it on the festival blog.

"Chip's work has made a huge impression in our small town this week and it's been amazing to talk to people about it," says David Holbrooke, the Festival Director. "One woman told me she was spending a lot of time with it and a friend told me that it sets the tone for Telluride," he says and remarks about a spirit in the town that he thinks can countenance difficult issues where others might ignore them.

"Despite its size," Holbrooke say, "Telluride has an unusual history of bold innovation and I think the mural reflects that very much." 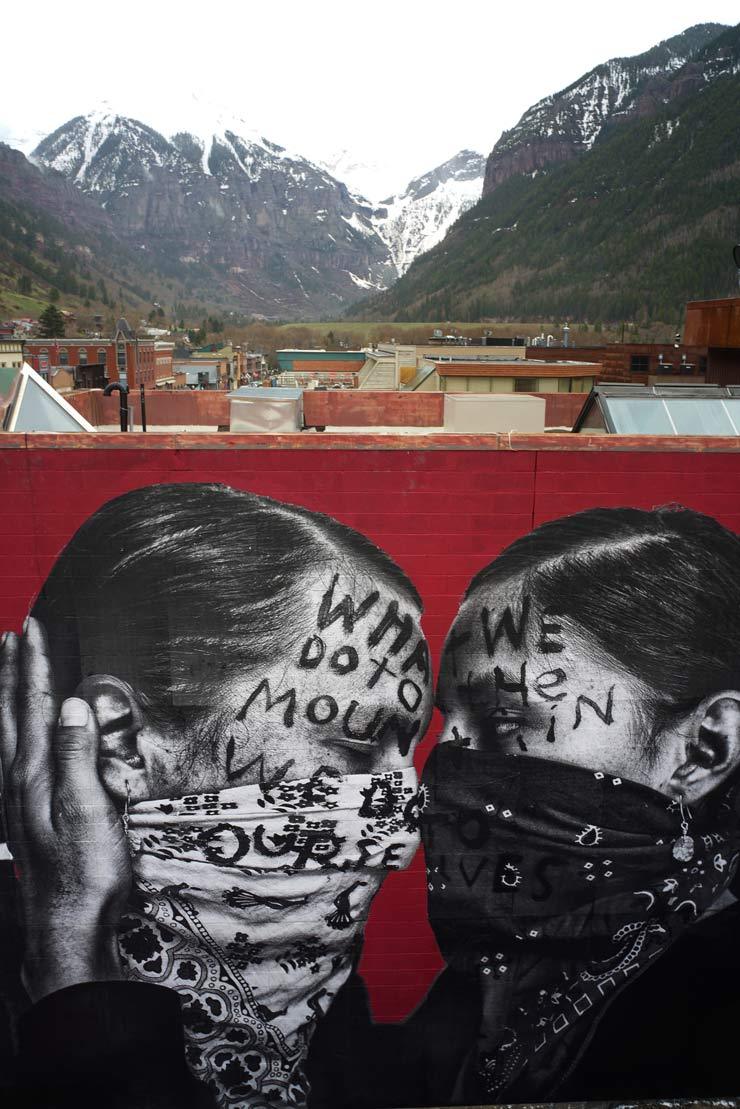 And the issue, as explained by native activist Klee Benally in the short video "Waste Water" below, directed by Mari Cleven, is that 13 indigenous nations consider a local mountain range to be sacred and that putting treated sewage effluent upon it is tantamount to desecration. Religious liberty aside, it also appears during public hearings in the video that standards of testing the water used to make this snow may be overlooking some pretty gross ingredients that will later turn local people and animals into science experiments.

"I wanted to help opponents of waste water snow so I interviewed several friends about the issue," says Jetsonorama, "Whatever they said was written onto their faces and then photographed." In addition to this large piece he also pasted a handful of other faces in Flagstaff with related opinions written across their faces. 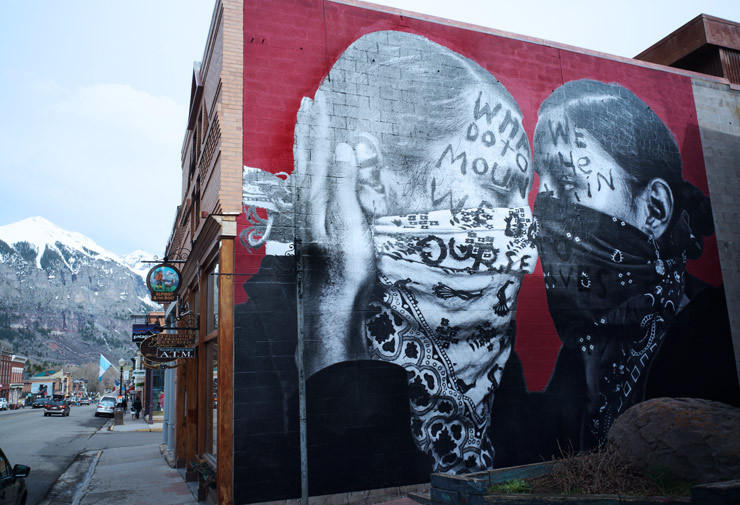 This old mining town may like to talk about being home to the first bank robbed by Butch Cassidy and the Sundance Kid, but will it want to talk about yellow snow or pharmaceutical residues seeping into soil, washing into rivers, eaten by toddlers in snowsuits?

Interestingly, Jetsonorama tells us that the town of Telluride has a ban on public art but an exception was made for the film festival. The temporary permit is expiring right after Memorial Day and the future of this mural is uncertain. He says that the town council will meet this week to determine the mural's fate. "My fingers are crossed," says the artist.