Jett Travolta's autopsy was completed Monday. According to his death certificate, Jett's death was caused by seizure.

The Travoltas released a statement on Jett's death late Sunday:

We would like to extend our deepest and most heartfelt thanks to everyone who has sent their love and condolences.

Jett was the most wonderful son that two parents could ever ask for and lit up the lives of everyone he encountered. We are heartbroken that our time with him was so brief. We will cherish the time we had with him for the rest of our lives. We have received many messages of condolence from around the world and we want to thank everyone for their prayers and support. It has meant so much to us. It is a beautiful reminder of the inherent goodness in the human spirit that gives us ahope for a brighter future.

With love, John, Kelly and Ella

MORE, WITH UPDATES: John Travolta's son Jett Travolta died in the Bahamas, reportedly from a seizure and hitting his head on a bathtub. His seizures were frequent and as such he was rarely left alone. Travolta has called Jett "my heart" in the past. The family had just arrived in the Bahamas on Tuesday for a New Year's vacation with staff members. An autopsy is scheduled for Monday.

Jett had long suffered from seizures, convulsing and losing consciousness, and his medication that once worked had stopped, family lawyers and friends told TMZ Sunday:

Jett had been having seizures on an average of every four days, until he started taking Depokate. Ossi and McDermott say the drug initially worked, reducing the frequency to approximately once every three weeks.

Jett took Depokate for "several years," but it eventually lost its effectiveness, according to Ossi and McDermott. They say "it began to cause serious physical damage" including damage to Jett's liver. And, Jett went back to having at least one seizure every four days. So Travolta and Preston, after consulting neurosurgeons, stopped administering the drug.

Kelly Preston's sobbed Saturday over grandson Jett Travolta's death. "I am devastated," Carlson told Us through tears. "He was the light of our lives."

John Travolta tried to resuscitate son Jett, say close family friends/Travolta's lawyer who is in the Bahamas with the Travolta family:

"Jett may have still been alive when John administered CPR, and then the EMT took over. Jett was pronounced dead at the hospital. I like to believe John had a chance to say goodbye. He may have died in his dad's arms. I am not certain...

He was a wonderful boy. He had physical limitations, but when he looked in his dad's eyes, the love was tangible. When he grabbed onto his dad, he did not want to let him go."

Ossi told People how Jett was never left alone due to his history of seizures and John is "heartbroken":

According to Ossi, around 5:30 p.m. on Jan. 1, John said goodnight to his son, who was tired from a long day spent on the water with his family. Jett went to his room with his nanny. "He always had a nanny by his side because he had a history of seizures," says Ossi. "John took extra precautions. [Jett] was never alone."

Mike McDermott, John's corporate counsel, adds, "John did everything in his power to revive [his son.] John and Jett had a very strong relationship. Words cannot explain how close they were. This will take a lot of time. His life will never be the same again."

The report of Jett's death:

There have been reports that Jett was autistic, though Travolta has denied it, saying he suffers from Kawasaki Syndrome, a condition which often leads to heart disease...

According to a [police] report, Jett Travolta was last seen going into the bathroom at their private suite at the Old Bahama Bay Resort sometime yesterday [Thursday]. The body was discovered by the caretaker, Jeff Michael Kathrain, at 10 AM today. The report says Jett suffered from seizures...

Restview Memorial Mortuary and Crematorium in the Bahamas tells TMZ Jett's body would be transferred to Restview on Monday...

Travolta's attorney Michael Ossi says Jett suffered a seizure at his family's vacation home at the Old Bahama Bay Hotel on Grand Bahama Island. Attempts to revive him were unsuccessful and he died on scene.

The AP reports the Travoltas arrived in the Bahamas on Tuesday and confirms the above police reports that Jett Travolta had a seizure, hit his head, and was found by the caretaker unresponsive Friday morning. They had more about Jett:

Travolta's corporate and commercial attorney, Michael McDermott, said the actor had a very strong relationship with his son.

"There was unspoken communication between the two. ... It's just so hard," he said in a telephone interview with The Associated Press. "Kelly is very quiet and both are grieving."

McDermott said his family and other friends are with the couple in the Bahamas. The group came for a two-day New Year's celebration and had planned to return to Florida on Sunday.

"We're are all here and trying to help in any way we can," McDermott said. "Their pain is so evident."

Access Hollywood first reported that Jett had hit his head on the bathtub in a fall:

The actor and his family were on vacation at the Old Bahama Bay hotel on the Grand Bahama island, when Jett fell and hit his head on the bathtub, a source told Access on Friday at 10 AM PST...

When contacted by Access Hollywood, an employee at the Old Bahama Bay hotel, where Travolta owns several beachfront units, said she was "not allowed to talk about [the incident]."

Kelly Preston discussed Jett's health problems in the past:

In 2003 Preston told Montel Williams that when Jett was 2 he became "very, very ill, but it seemed like flu symptoms" before being diagnosed with Kawasaki disease. The condition, which usually affects children from ages 2 to 5, can cause inflammation of the arteries. Usually treatable, it can lead to lasting heart damage in rare cases.

Preston, who also said Jett suffered from asthma, blamed household cleaners, fertilizers and pesticides for sparking the condition and lobbied for more detailed labeling on chemical products. She credited a detoxification program based on the writings of Scientology founder L. Ron Hubbard with helping to improve Jett's health.

Travolta also has spoken in the past of Jett's condition:

"I was obsessive about his space being cleaned. We constantly had the carpets cleaned," Travolta said in a 2001 interview with CNN's Larry King, a portion of which was rebroadcast on the "Larry King Live" show Friday night. During that interview, when Jett was 9, Travolta spoke of how his son nearly died when he was 2.

It is unclear whether Jett was taking any medications for his seizures...

Travolta has spoken of his love for Jett:

"He's my first, and he's my heart. And he's a very special boy," Travolta said. "He's Daddy's boy. And...we spend a lot of time together even though I'm pretty busy. He loves the outdoors and he loves to travel.

"He loves being on the plane. We fly in the ultralight together," he continued. "And...he likes to climb trees and swim."

Here are some Jett Travolta photos with his parents when he was a baby and younger child.

The family in images from John Travolta's official website and handouts, scroll down for video: 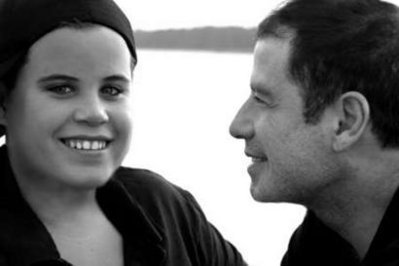 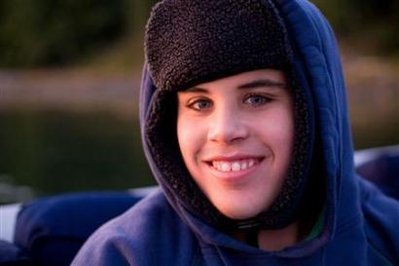 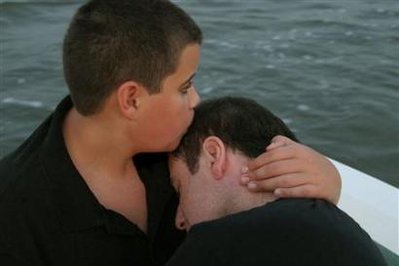 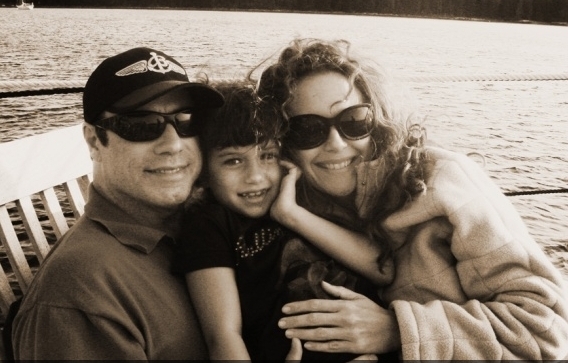 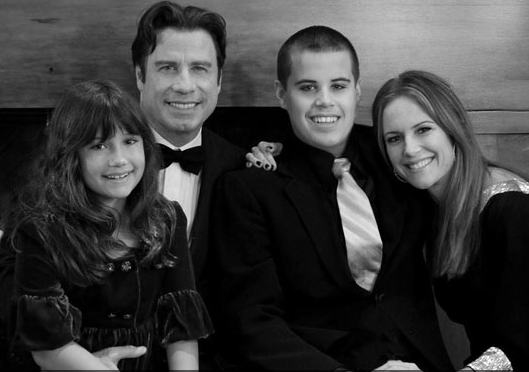 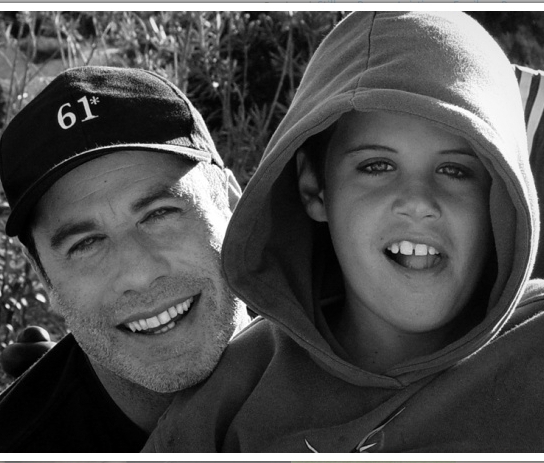 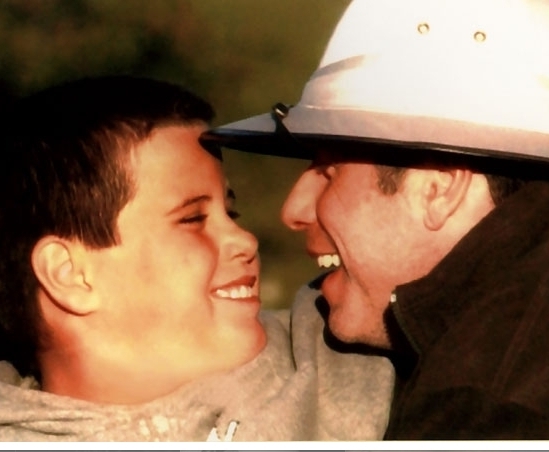 Video of the Travolta family in Paris a few week's ago, where John has been filming: