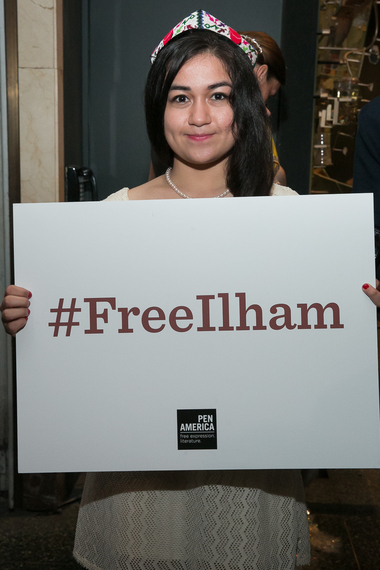 This week, Chinese President Xi Jinping will arrive in Washington D.C. to meet with President Barack Obama. It will be President Xi's first state visit to the U.S. and an impressive--and tight--itinerary of bi-lateral talks, meetings, banquets and receptions await him. The visit will certainly underscore the need for open and clear lines of communication between China and the United States in order to reach understanding on the issues of disagreement dogging Sino-American relations. I support this effort to have a fruitful dialogue between these two countries, and have never been swayed by early calls for the state visit and its attendant discussions to be cancelled.

But ironically, while China's president is enjoying the hospitality of his hosts in this country, engaging in dialogue with those who disagree with him on many issues, scores of well-known dissidents and an unknown number of lesser known writers, artists, intellectuals, and activists will be languishing in the prisons that his government oversees for seeking to do nothing other than what he himself will be doing this week.

One of those imprisoned writers is my father, Ilham Tohti. At this very moment he sits in prison in Urumqi, the capital of the Xinjiang Uyghur Autonomous Region, the area where most of our Uyghur compatriots reside. September 23 will mark a year since he was sentenced to life in prison. His crime? Writing, teaching, and operating a blog intended to bring Han Chinese and Uyghurs--a Turkic Muslim minority group in China--together peacefully to understand the issues and discontents that have caused so much misery and repression among Uyghurs. His work has been honored with numerous international awards, including the 2014 PEN/Barbara Goldsmith Freedom to Write Award. Now, in sharp contrast, he sits every day in shackles and is subjected to a harsh regimen. Denied halal food except intermittently, he has grown thin and wan.

I remain very proud that my father has such strength of spirit. It takes a singular person to maintain a positive mental outlook under such brutal conditions. But it is hard not just for him--our family also suffers. My family can visit him only once every three months. This visitation schedule, which is more strict than for other prisoners, began only recently. My two younger brothers, both of whom very much need their father's care and love, saw him on July 8 for the first time in over a year and a half. And the father whom they finally saw again was suddenly and shockingly pale, haggard, and thin in their eyes. At just four and seven years old, they can still remember clearly their father's voice and the experience of care and affection from him that was part of their young lives so long ago. And so they waited for ages for this short meeting, one that brought in its wake more longing, endless tears, and another wait of three months.

This is excruciating for us, the children of Ilham Tohti. Proud as I am to be his daughter, I worry day and night about him, shackled and behind bars in one of China's crueler prisons. My father has striven to bridge the gap between Chinese and Uyghurs through dialogue alone. When restrictions were placed on the outlets in which he might publish, he turned to the internet. Anyone who has read his writings knows that he is anything but an extremist. He never hid his authorship and he made his opposition to violence very clear.

Think of what it means for China when an advocate of understanding through dialogue receives the most severe of punishments: life imprisonment for the peaceful expression of his views. As Uyghurs and other Chinese citizens with legitimate concerns about Beijing's oppression continue to be silenced, extremists emerge from the shadows to occupy that space with a message that drives China further and further away from the "social harmony" its leaders profess, and that my father worked for. This policy of silencing peaceful dissent has set China on a frightening path, and the fate of my father will tell whether this is indeed to be its future.

Jewher Ilham is the daughter of jailed Chinese Uyghur writer and academic Ilham Tohti, who was sentenced to life in prison on September 23, 2014.