The public was surprised if not shocked by the recent revelation that the mother of the late Cardinal John Joseph O'Connor, Archbishop of New York from 1984 to 2000, was Jewish. In the Jewish tradition, having a Jewish mother makes a person Jewish. What's more, Cardinal O'Connor's grandfather was a rabbi. At first I too was stunned. But then I thought, what's the big deal? Jesus' mother was Jewish. So were the mothers of John the Baptist, Peter (the rock on which the church would be built), Paul (who many believe actually founded Christianity), and the mothers of all of Jesus' disciples and followers. Add to that the fact that Jesus was a dedicated Jew throughout his life. With these thoughts in mind, an intriguing image and hypothetical question occurred to me.

Imagine Jesus returning and standing in front of two adjoining buildings -- a synagogue and a Catholic church. Which one would he choose to enter?

Peeking into the church he might cringe at the sight of crucifixes. In his lifetime the cross was a hated and feared symbol -- a reminder of the tens of thousands of Jews who were crucified by the Romans (it wasn't until the fourth century CE that the cross was introduced as a Christian symbol). And the iconography and statues in the church might puzzle Jesus: first, as an affront to the Jewish ban on graven images in his time (when Pontius Pilate and his troops marched into Judea waving banners with the image of the emperor Tiberius, in violation of an agreement, Jews rioted). Then Jesus might look at the statues of saints and church officials and wonder, "Who are these Roman figures -- and where are Jupiter, Apollo, Venus, and the other gods in the Roman pantheon?"

Turning his attention to the synagogue next door, Jesus would be thrilled to see the Ark (closet) housing his beloved Torah -- a reminder of the many days and Sabbaths he spent in synagogues, his spiritual home, praying, reading from the Torah, and teaching (Mark 1:21; Luke 4:16).

Would Jesus' choice of which building to enter even be a contest?

For example, The Wedding at Cana, by sixteenth-century artist Paolo Veronese, was inspired by a description of the event in the Gospel of John (2:1-11). It was at this wedding that Jesus performed his first miracle -- turning water into wine. It's a Jewish wedding attended by Jesus, his mother, Mary, and the disciples. All the other guests were Jews -- Jews of the period did not associate with non-Jews, particularly at religious celebrations. But Veronese's painting shows nothing Jewish.

To explore this further I projected a photo of Paolo Veronese's painting on a screen for an audience of thirty adults, mostly Jewish. 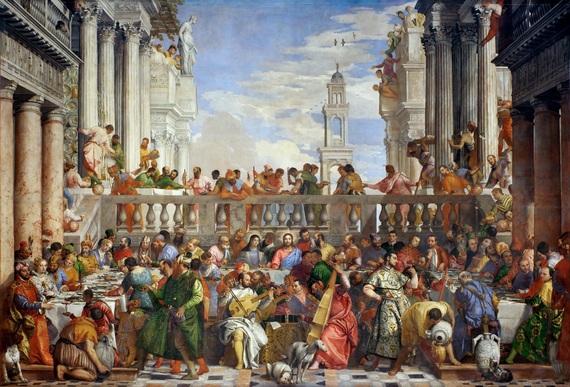 Wedding at Cana by Paolo Veronese--en.wikipedia.org

This is not surprising, since Medieval and, particularly, Renaissance artworks erase Jesus' Jewish identity, as well as the Jewish identities of Mary, Joseph, and close followers of Jesus. These figures are routinely converted into blond, fair-skinned Northern Europeans in latter-day Christian settings. There is no indication that they were actually dedicated practicing Jews from a rural village in Nazareth.

Typical of the massive numbers of such artworks is Michael Pacher's fifteenth- century painting of The Betrothal of the Virgin (Betrothal -or marriage- of Mary and Joseph) -- a depiction of the ceremony that is purely and anachronistically Christian. 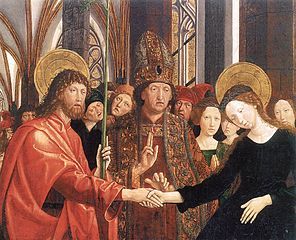 Betrothal of the Virgin by Michael Pacher--commons.wikimedia.org

Art historians and commentators with whom I have spoken insist that the contemporizing of Jewish figures that transformed them into Renaissance Christians, as in Pacher's painting, was merely an expression of the prevailing painting style. At the same time art historians praise Renaissance artists for a revolution in art that introduced realism and naturalism -- a realism and naturalism that unfortunately did not extend to picturing Jesus and others as who they actually were in identity and ethnicity. Then, in what appears contradictory to realism and naturalism, some authorities explain that the Christianizing of Jesus and others in artworks reflect the Renaissance revival of Greek idealism.

The same Greek idealism argument is advanced to account for an uncircumcised Jesus in virtually all Renaissance paintings of Madonna and Child that display Jesus' genitals -- despite the fact that the Gospels tell us that Jesus was circumcised on the eighth day after birth, as prescribed in the Torah.

These dismissive remarks ignore the power of perception to shape beliefs and ideologies with which I, as a psychologist, am familiar. These comments also sidestep the impact of the consistent misrepresentations of the identity and ethnicity of Jesus in the context of the history of Christian-Jewish relations and anti-Semitism.

No matter what color, facial features, or setting Jesus is given, the inclusion of Christian symbols, Christian church officials, and latter-day saints, along with the absence of any Jewish imagery, make a strong and false theological statement -- not just a statement of artistic preferences of the era. These falsifications have had dire consequences for Jews over many centuries, by reinforcing the prevailing myths that fueled the persecution of Jews. Especially potent was the myth of Jesus the Christian against the Jews -- the others -- who not only opposed him but killed him (despite the fact that all of Jesus' followers were Jews).

To grasp the dynamic impact of these misrepresentations and falsifications of biblical history, art historians and commentators must get outside their limited focus on Renaissance thinking and invoke a broader twenty-first century perspective. They must consider the psychology of perception and how false imagery has contributed to the grim history of anti-Semitism. To do this, they must apply the same kind of broad historical analysis that art historians apply to a host of artwork features, including perspective, color, lighting, brush strokes, even the mathematics of shapes, forms and spaces, as well as other characteristics. Shouldn't the glaring falsifications of content and biblical history receive at least a small mention in these detailed examinations and commentaries?

Now return to the image of Jesus choosing which building to enter and answer this question: Do art representations of Jesus that omit his Jewish identity make any sense?

Isn't it time to celebrate the common heritage of Judaism and Christianity, despite the differences between the two faiths? Isn't it time to endorse Pope Francis's bold statement: "A Christian cannot be anti-Semitic; his roots are Jewish"? Cardinal O'Connor would surely give that an enthusiastic thumbs up!

Bernard Starr is a psychologist, journalist, and college professor. He is the author of Jesus Uncensored: Restoring the Authentic Jew and the organizer of the art exhibit "Putting Judaism Back in the Picture: Toward Healing the Christian Jewish Divide."