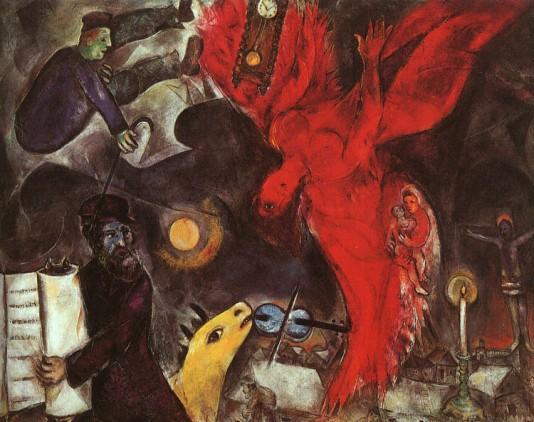 The Falling Angel by Marc Chagall

Last week I viewed the new exhibit of Marc Chagall's paintings at New York's Jewish Museum (Chagall: Love, War and Exile). The show features images of the Jewish Jesus, a subject of great interest to me as the author of the recently published book, Jesus Uncensored: Restoring the Authentic Jew. On entering the first gallery I was surprised to see an orthodox Jew in traditional dress staring at a large painting, The Falling Angel. Set in Chagall's shtetl, his small Jewish village in Vitebsk, Belarus, this striking work depicts a fiery angel plummeting upside down to earth, signifying the age of terror for Jews (the Nazi era). The painting also includes an image of Jesus nailed to the cross, a mother embracing a baby, and a frightened rabbi escaping with a Torah scroll. It's the largest and most impressive painting in the exhibit.

In interviewing people of all faiths for my book, I found that Jews are typically put off by Christian images; and many will not allow the name Jesus to pass their lips. So I was curious about the young Hasid's view of the painting he was looking at. Was he expecting what the name Marc Chagall usually conjures up? Magical, allegorical and playful images of Jewish life. At first he hesitated when I asked him about the painting, but when I pressed he said "it's troubling" but would not elaborate.

The fact that Jesus was a committed practicing Jew is lost on most Jews. Not surprising in view of unspeakable acts of persecution for more than a thousand years, often in the name of Jesus, although Jesus had nothing to do with these acts and would have been horrified by them.

My brief encounter in the gallery punctuates the importance of the Jewish Museum exhibit, which includes twenty-four images of the Jewish Jesus (out of 31 paintings and 22 works on paper) that center almost exclusively on the crucifixion. Chagall was captivated by the crucifixion for its analogy to the suffering of Jews throughout history and particularly during the Holocaust. For Chagall the crucifixion represented the Jewish people. In these paintings, Jesus is identified as Jewish as well as Christian, with some images displaying a tallit wrapped around the dying Jesus rather than a loin cloth, and other Jewish symbols.

For example, Apocalypse in Lilac (Capriccio) pictures a naked Jesus on the cross with a halo, but also donning Tefillin (phylacteries) on his head and arms and draped in a long prayer shawl. Jesus is glaring down at a Nazi storm trooper displaying a swastika armband. Off to the right is a terrified child and a Jew gripping a Torah scroll. Chagall's Persecution shows the crucified Jesus with the shtetl burning in the background. In Christ and the Artist Chagall puts himself in the painting, looking up at Jesus on the cross while holding an artist's palate. Calvary, his cubist rendition of the crucifixion, depicts Chagall's parents standing at the base of the cross with hands outstretched ready to catch the martyred Christ, represented as a child. The Crucified is a horrific image of slaughter in a shtetl. Slain bodies are strewn on the ground, including a young woman holding an infant, and the streets are lined with crucified men in contemporary Eastern European dress. A sign on one of the crucified says "Ich bin Jude" (I am a Jew). A man sits on a rooftop clutching a rescued Torah scroll.

The Jewish Museum exhibit contributes significantly to countering the bulk of Medieval and Renaissance artworks about Jesus, his family and followers, which completely eliminated their Jewish identities and heritage. These paintings commonly depicted them as blond fair-skinned Northern Europeans immersed in anachronistic Christian settings, with saints, high church officials, and Christian artifacts. Art historians dismiss the omissions as the Renaissance style of contemporizing images. However, it's one thing to contemporize physical appearance and dress, even setting (palatial vs. crude village habitats), but quite another matter to steal identities and falsify biblical history. The "style" rationale is also given lie by the fact that Renaissance images of classical Greek figures and heroes, sometimes pictured in contemporary Renaissance attire and settings, are not also seen holding crucifixes (which did not exist as a Christian symbol until the fourth century) or kneeling in Christian prayer poses surrounded by Christian saints and church officials.

Walk through the Renaissance galleries of any major museum and you will be greeted at every turn with totally Christianized images of the Jewish Jesus and others in his community, without any acknowledgement of the distortions and omissions. To get a conversation going on this subject, perhaps it would be useful for museums to place Chagall's images, as well as those of several 19th-and 20th- century artists who created a small body of Jewish Jesus artworks, alongside some of the Medieval and Renaissance works.

While Chagall's powerful paintings restore Jesus's Jewish identity, they focus primarily on one theme: the common ground of suffering -- Jesus suffering on the cross signifying the suffering of Jews in horrendous persecutions. But there remains a need to show the Jewish Jesus in other contexts to counter the distortions in Medieval and Renaissance artworks, which have contributed to anti-Semitism by feeding the illusion that Jesus and Jews were of different religions and ethnicities. Toward correcting that, I've invited artists to submit revised renditions of Medieval and Renaissance artworks that put Judaism back in the picture, as well as other submissions that integrate Judaism and Christianity in the persona of Jesus, as in Chagall's paintings. I hope these new works will show the two sides of the Jesus story: Jesus the dedicated Jew and Jesus whose life and teachings inspired a new religion.