Rembrandt and the Images of Jesus, a 2011-2012 exhibit curated by the Louvre, the Philadelphia Museum of Art, and the Detroit Institute of Arts presented artworks, primarily by 17-century, Dutch artist Rembrandt van Rijn, which displayed images of Jesus that departed from typical Renaissance representations. When the exhibit opened at the Philadelphia Museumit was heralded by The New York Times as "a gutsy makeover of the most-depicted man in Western art. Jesus was, of course, Jewish. But few artists emphasized his ethnicity, or his humanity, as frankly and directly as Rembrandt did." In making her point, Times critic Karen Rosenberg cited two of the most striking works in the exhibit: The Head of Christ and The Supper at Emmaus. 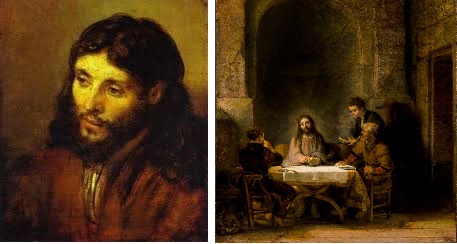 Rather than painting an idealized Christian image of Jesus, common in Renaissance paintings, Rembrandt painted portraits that are realistic representations of the live models who posed for his paintings of Jesus. More remarkable, art historians generally believe that the model for The Head of Christ (the exhibit included six versions by Rembrandt) was a young Sephardic Jew. The Louvre Museum commentary describing the exhibit said: "For Rembrandt, working from a Jewish model would have been a means of returning to a historical truth, or portraying Jesus unadulterated, as the Jew that he was -- a form of realism scoffing at tradition."

That he used a Jewish model is not surprising, since Rembrandt lived in the Jewish quarter of Amsterdam, where he associated with many Jews; he also produced several masterpiece portraits of Jews, including Portrait of an Old Jew, Portrait of a Young Jew and The Jewish Bride.

Rembrandt's human Jesus is a refreshing departure from the massive collection of Medieval and Renaissance images that Christianized the Jewish Jesus and erased any evidence of his Jewish identity or origins. These classical paintings, like the ones cited in a chapter in my book Jesus Uncensored: Restoring the Authentic Jew entitled "The Ethnic Cleansing of Judaism in Medieval and Renaissance Art" typically picture Jesus, as well as his family and community, as blonde fair-skinned Northern Europeans, residing in palatial Romanesque settings surrounded by Medieval and Renaissance saints, high church officials and anachronistic Christian artifacts. Nowhere in these artworks is there a hint of any Jewish connection.

The curators of Rembrandt and the Face of Jesus should be applauded for their effort to counter and correct this falsification of biblical history.

When you look at these paintings if you are prone to seeing Jesus and others as Christian, you can. Or, if you choose to see the Jew in Jesus, there's nothing in the paintings to dissuade you. Unlike the distortions common to classical artworks, they are not loaded with anachronistic Christian content. In other words, Rembrandt's paintings, drawings, etchings and sketches -- and other works in the exhibit -- are mostly religion neutral. Religious identity of the figures and scenes is left to the viewer, with the emphasis -- especially for Rembrandt -- on authentic flesh-and-blood images.

That being said, Rembrandt's life-like images, which display his fierce realism, brilliant use of light, detail and perspective, unequaled in portraiture, are hardly an antidote to the more traditional distortions that omit Jewish content. The same can be said for other works in the exhibit. The goal stated by the Louvre of "portraying Jesus unadulterated, as the Jew that he was" is not achieved.

That's why to counter the historic distortions I've invited artists to submit new renditions of classical artworks that restore the Jewish in Jesus -- and others in his family and community. This planned exhibit, received an important boost when architect and painter Rod Borghese contacted me in response to one of my articles on the falsification of biblical history in classical artworks. He offered to create new versions of the Christianized paintings. Interestingly, Rod Borghese is distantly related to the noble Italian Borghese banking family, art patrons who commissioned many of the Renaissance paintings of Jesus. The Borghese Gallery's extensive collection housed in the Villa Borghese in Rome, Italy is considered one the of world's finest, with artworks by Bernini, Canova, Bronzino, Caravaggio and Titian, just to name a few.

Rod's first submission captures the theme of the exhibit with his rendition of Bartolomé Esteban Murillo's seventeenth-century The Baptism of Christ: 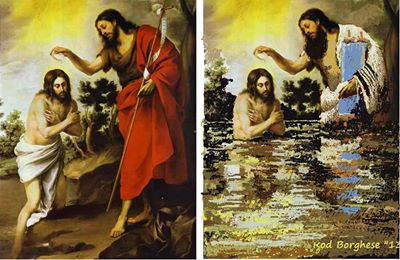 In Murillo's painting (left), John is holding a crucifix staff, which suggests a Christian conversion. But the fact is that Christianity did not exist at the time, and, according to the Gospels, John baptized only Jews, in order to purify them for the expected arrival of the Jewish Messiah. Consider, too, that the cross was a hated symbol in the time of Jesus and John, a reminder of the brutal crucifixion of tens of thousands or more Jews. The cross didn't become a Christian symbol until the fourth century, when the Emperor Constantine introduced it as a battle symbol on his military shields and banners.

It has been well established that neither John nor Jesus intended to start a new religion. But that message has not gotten across to the general public, or it has been distorted over the years. That's why I wasn't entirely surprised that many of the people whom I interviewed for my book insisted that Jesus became a Christian when he was baptized by John the Baptist. In fact, the word "Christian" does not appear at all in the Gospels -- and only three times in later parts of the New Testament, well after the crucifixion.

Rod Borghese's rendition of Murillo's painting (right) shows John wearing a Jewish prayer shawl and holding a Torah scroll, a symbol of Judaism that John may very well have held. He certainly never displayed a crucifix. Yet John holding a crucifixis an iconic Renaissance image that appears in painting after painting. Rod's version also places the baptism in the Jordan River as described in the Gospel of Matthew (1:13-16). While it's unlikely that a Torah scroll would be used for this occasion, it's introduced as a symbol stating that the baptism is a Jewish event related to prophesy in the Torah.

Rod's second submission is a rendition of Michael Pacher's 15-century Engagement (some say marriage) of the Virgin:

Pacher (left) pictures the betrothal of a 13-year-old Jewish girl, Mary, to her Jewish carpenter fiancé, Joseph. The official is a high Christian church official, performing the ceremony in a Romanesque setting. Rod Borghese's rendition (right) accurately restores a Jewish context that is historically appropriate.

Images are powerful in defining reality for the viewer. The pervasive Christianization of the Jewish Jesus in classical artworks fed the illusion that Jesus was of a different religion and ethnicity than the others -- the Jews -- when in fact they were all Semites of the same Jewish faith. To emphasize the false distinction, Jews were depicted in classical artworks as dark and menacing. See Peter Paul Reubens' Tribute Money (1512) and Albrecht Durer's 16-century painting, Christ Among the Doctors (Pharisees). By adding the charge of "Christ Killers" to this distorted and ugly imagery, church leaders sought to forge a final separation between Judaism and Christianity.

This exhibit does not suggest that new renditions of classical artworks are in any way better than the originals. Obviously, the Medieval and Renaissance painters were extraordinary artists; their artworks will stand forever as masterpieces. The primary intention is to address the omissions and misrepresentations of biblical history in the depictions and content, which have had enormous impact in dividing Christianity and Judaism.

For more information about the exhibit visit here.