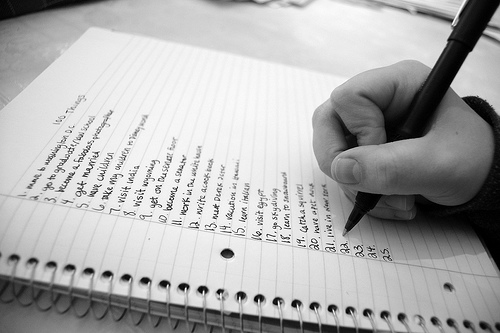 Jeffrey Goldberg's recent column in Bloomberg, is a very powerful argument for canceling the recent proliferation of media-inspired "Jewish Lists." This article is a must read. It also got me thinking about what the lists that we create today say about our generation, because lists are a valuable insight into our culture.

Whether we are aware of it, published Jewish lists have been around at least since the sixth century when the scholars and leaders of the Jewish community in exile in Babylonia directed the academies of Sura and Pumbedita. These leaders, collectively called the Geonim, were charged with making hard decisions and protecting the safety and welfare of Jewish communities. As such they worked hard to help keep continuity by making complex law and philosophy more easily understood. The famous scholar Sa'adya Gaon made a list of commandments in the Torah. He was followed by other rabbis, and the Ramban and Ramban both wrote lists identifying what they felt were the exact listing of biblical commandments. Later the Sefer Ha Chinuch made a list of mitzvot, this time with a beautiful explanation of each mitzvah and this is still popular today -- eight centuries later. (And let's not forget the most cherished list, The Ten Commandments.)

More recently, it became popular to make lists of Jews in sports, music, film, writing, Nobel Prize winners and other public Jews who are part of the tapestry of 20th century Jewish life. List making became a new who's who directory of famous Jews. (Even the "Book of Lists " was written by a Jew.) What these lists have in common is a desire to highlight to the world and the Jewish community itself that we are making a positive contribution to society. We should be proud of our collective contributions to America, for example.

Within the community, it seems another reason for these lists is to inspire our children with Jewish role models -- even if some of these Jews were never open or proud of their Jewishness. It seems as if the people making these lists think it will energize a listless Jewish community or perhaps make the community more inviting to any Jew standing on the margins.

Of course there are insidious Jewish lists as Goldberg so eloquently points out, such as the lists put together by Nazis, Communist regimes, other totalitarian regimes, Senator McCarthy's infamous political enemies list, American White Power movements, Islamic radicals -- just to name a few.

Recently, popular list making is being scrutinized as doing more harm then good, as pointed out eloquently by Goldberg. There is also Danielle Berrin's long expose about the 50 Most Influential Rabbi's list and Dennis Prager's column in the Jewish Journal.

There are other lists as well: The Forward's list of top American Jews, the Forward 50 Fifty, and Most Influential Jews list by the Jerusalem Post, which seems to be the final straw for Goldberg. And there are others. (In full disclosure, I have been listed on some lists, most recently on a list of 10 top Jewish influencers in social media.)

The recent proliferation of media-inspired lists do not achieve the purpose that communal list-making served in the past. Instead of serving to clarify, inspire and teach about who we are as a people, today's lists are of people and not ideas or values and can only serve to divide an already quarrelsome people.

We can honor the work of our rabbis, leaders, thinkers and revolutionaries better by supporting their projects and causes, supporting and building upon the good we see them doing instead of putting them on a juried list that more than anything serves as a cultural barometer of the year the list was made.

Additionally celebrity list-making takes the focus and attention away from the real issues that matter in the Jewish community.

When lists are used to enhance our appreciation and the beauty of our heritage, the turbulence of our history and the innovation of ideas they can have great use. Instead of a list of most influential individual people we could be giving people access to the great Jewish ideas of the past and present. Valorize the Jewish things that are making a more humane, safe and spiritual place for our people and all the people of our shared world. Let's harness the power of list generation to better serve ourselves and the world around us. And we might even inspire a few Jews standing on the margins who just might want to connect to that which is worthy of their attention.