This past week, Paris, one of the great Western capitals, was rocked by a terrible tragedy. On a Friday night, 129 innocent people simply enjoying an evening out died at the hands of extremists who believed they were killing in the fight to avenge their people and "their" God. It was the worst attack in France since World War II, and it has left Europe feeling under siege.

As we across the pond stand in solidarity with Paris and mourn the innocent victims of such hatred, how can such ruthless violence even begin to be checked? Thanks to a recent high-profile Jewish-Muslim dialogue though, a top Jewish scholar and a top Muslim scholar may have given us just the lesson or two needed to help humanity move forward.

On November 12, American University (AU) had the honor of welcoming Lord Rabbi Jonathan Sacks, the former Chief Rabbi of the U.K., for a dialogue with Ambassador Akbar Ahmed, the Ibn Khaldun Chair of Islamic Studies at AU and the former Pakistani High Commissioner to the U.K. and Ireland, for a dialogue on countering religious violence. Named "two of the leading scholars of religions, two of the most exciting thinkers of our days and also two amazing spiritual leaders," by moderator Professor Michael Brenner, the Seymour and Lillian Abensohn Chair in Israel Studies at AU, this dialogue not only talked the talk of Jewish-Muslim relations, but walked the walk. 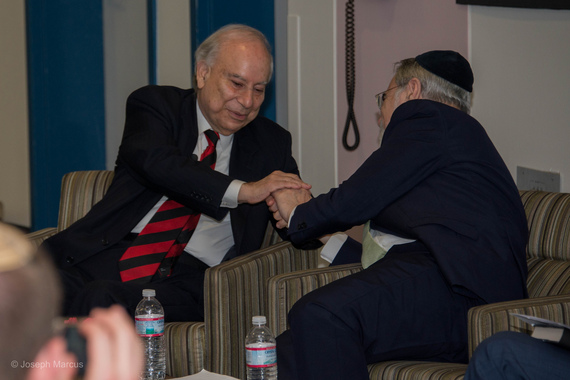 Andalusia and Abrahamic coexistence in European history
Many in the West today perceive we are experiencing an impenetrable clash of civilizations with the Muslim world. And as Paris sadly demonstrated, Europe in fact faces a major crisis rooted in fractured interfaith relations. However, just because interfaith tensions provoke atrocities today, does not mean the Abrahamic faiths have always been or must keep fighting one another. A model for coexistence even comes straight from the annals of European history.

Between the tenth and twelfth centuries, Andalusia thrived under "benign Islamic rule," as Sacks describes the era of La Convivencia, when Muslims, Jews, and Christians lived side-by-side in creative harmony. This era of history, directly out of present-day southern Spain, is a Western legacy of interfaith harmony that all of us can learn from and apply today. And as Sacks so eloquently stated, "The idea that Jews, Christians and Muslims should live together in mutual respect is not utopia. We have been there before." And we can do it again.

Among the most prescient stories of La Convivencia is that of the famous Rabbi Moses Maimonides, among the greatest Jewish philosophers of history. Maimonides thrived in Andalusia under Muslim rule, spending his career in constant contact with the great Muslim philosophers of the time. In fact, as Sacks illustrates, the codes of Sharia law were the primary inspiration for Maimonides' writing of the Mishneh Torah, or comprehensive code of Jewish law. Sharia, the oft-maligned and misinterpreted code of Islamic law, actually inspired the core of modern Jewish law. This Islamic codification of its own faith also inspired Maimonides to write out the Thirteen Principles of Jewish Law. Thanks to La Convivencia, Muslim inspiration established a core foundation of contemporary Judaism--a connection that cannot be brushed aside.

Some may perceive the stories of La Convivencia as mere historic relics. It was, after all, a millennium ago when the era of La Convivencia reached its pinnacle. Yet, during this remarkable AU dialogue between a Muslim and a Jewish scholar, a deep mutual admiration and friendship between leaders of these supposedly antithetical faith groups became readily apparent and showed that La Convivencia can be the 21st-century reality. 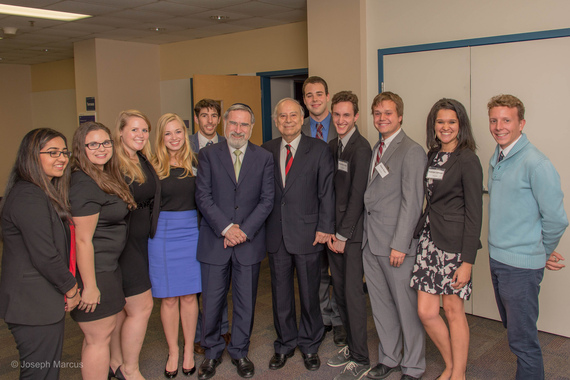 Cross-faith friendship and solidarity
Rabbi Sacks and Ambassador Ahmed first came together through another moment of interfaith bridge building in the mid-2000s. Inspired by a series of award-winning interfaith dialogues between Ahmed and Judea Pearl, the Jewish father of Wall Street Journal reporter Daniel Pearl, killed as a hostage while reporting in Pakistan in 2002, Sacks invited the two together for an interview on his annual BBC program as then-Chief Rabbi. And from this great encounter, another present-day friendship between a Jewish scholar and a Muslim scholar emerged and flourished.

The friendship between Sacks and Ahmed has only strengthened through years of narratives trumping up Jewish-Muslim antagonism. Before even answering moderator Brenner's first question, Sacks professed his delight for being with his "beloved friend now of many years, Professor Ahmed," even going on to call Ahmed a "great, great, great man." Sacks also went on to celebrate Ahmed's distinguished career in building faith bridges by stating, "Professor Ahmed has what we so need now, somebody who has enough religion to make us love one another, not just hate one another." Such genuine comments like these, from a Jewish faith leader and scholar to a Muslim scholar no less, cannot be staged. And if Jews and Muslims who intimately know their faith traditions can build a strong friendship, so too can millions of Jews and Muslims around the world.

This co-admiration between Sacks and Ahmed was not the only interfaith friendship visible on stage either. Rabbi Bruce Lustig, the senior rabbi of the Washington Hebrew Congregation in Washington, D.C., also professed his deep admiration for Ahmed's interfaith work. Lustig, in his note of thanks for the evening, not only called Ahmed his friend and teacher, but even stated, "[Ahmed] actually lives the best of the Abrahamic faiths."

For two senior rabbis to hold a devout Muslim scholar in such high regard indicates true fraternity among these broader faith traditions can and does exist. Sadly, such cordiality between Jews and Muslims has become something unusual and noteworthy. In a somber world where Jews and Muslims are killing each other daily in the Middle East, and terrorist groups attack their brothers and sisters in Abraham globally, such rich interfaith friendships must deepen, proliferate, and be shared with the world if Abrahamic peace is to once again prevail. Jewish-Muslim friendships can become the norm, rather than the exception.

The necessity of interfaith bridges
The Abrahamic faiths can come together. It has happened in history--Andalusia was, on balance, a time of true interfaith harmony. It happens today in friendships between top scholars and leaders of Judaism and Islam. And it can happen on a global scale.

Bridges will not be built overnight. Jewish and Muslim communities must overcome generations of animosity to build a broader peace. But if this dialogue between Rabbi Sacks and Ambassador Ahmed is indicative of anything, it is that such bridges can be built, and the framework stands. It is a matter of laying the pavement now, and this pavement must be set.

We cannot let the attacks in Paris stop us in our efforts to bring our Abrahamic faith traditions together. It is the fate of France, Europe, and the whole of the West that lays endangered if peace cannot be fostered between such fraternal faith traditions that stand in such tragic antagonism today.