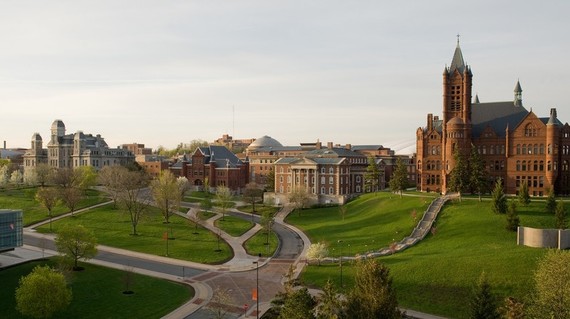 I'm not exactly sure how it happened, but I was invited to blog at HuffPost Religion, I assume in my capacity as a scholar of modern Judaism and Jewish culture. Of course, the invitation is incredibly flattering. At the same time, it represents a peculiar challenge. As a sometimes reader, I come to the Huffington Post as if before a great unknown. An online media platform there is something vast about the site. A truly cosmopolitan world, the Huffington Post is full of strangers with their own ideas about practically everything under the sun. A large, anonymous and networked place, the site is a friendlier version of the world-picture in works of science fiction by Phillip Dick and the like. What is a professor of Religion even doing here? What am I doing here? What about the sense of myself that I hold so dear? Will I just disappear? Will my post attract readers? The challenge is how to write about religion and Judaism in this kind of media environment for such a broad and public readership.

By a broad and public readership I mean non-academics, or what we academics sometimes call either wistfully or disdainfully "ordinary people." But really I'm talking about people who are near and dear. Sometimes it will happen at extended family dinners like a Friday night dinner, a birthday part, or a Passover seder. I end up talking about my work, or things that I might happen to know from work. Sometimes the effort falls flat. Maybe I'm not prepared that evening. Maybe the connect is off at that particular moment. For whatever reason, the words come out flat and unshaped. When the attempt to communicate goes more or less well, I'll inevitably be asked why I will not or if I simply cannot write books that so-called ordinary people might want to read. That means exposition without jargon, technical baggage, heavy citation and other forms of academic inside-baseball.

Maybe it is because my area of academic specialization in Judaism is about the religious culture of a small people, but for whatever reason I have come to accept what it means to be out of step. I get this feeling whenever I'm in a strange airport, driving down unfamiliar freeways full of traffic, shuffling through a large mall crowded with people, or in the elevators of large hotel lobbies. In these kinds of environments, I understand completely that nobody actually cares about my work. Why should it be otherwise? No one has any reason to do so. It's a big world out there.

We academics tend to blame others for the lack of interest in what we do professionally. But the sad truth is that much of what afflicts intellectual culture in this country is very much our own fault. We academics often trade in obscure stuff. The trick is to assume that everything is as potentially interesting as anything else. If that's the case, then it is up to make the first move and to reach out to other people in the broader public. It's a matter of finding the right platform, striking a balance, and finding the right pitch.

The invitation to blog at HuffPost Religoin came as something of a surprise. It may or may not have something to do with how I have shamelessly promoted myself at my personal blog. I started Jewish Philosophy Place four years ago because I was dissatisfied by a general sense of isolation that I felt in my professional life. I decided to create the blog as a middle brow place. JPP is intellectual bric-a-brac. I post thoughts about books that I'm reading and about projects that I am working on. Sometimes the posts at JPP are obscure and technical. But I also post little bits where I throw in two bits about academic, American, Jewish, and Israeli politics. Then there are the visits to art museums and galleries, articles and pictures that I read online that I want to share and upon which I want to comment, visual puns, digital images that I photograph around town, on vacation, in the car between my commute from New York to Syracuse University where I work in the Department of Religion.

My plan here at HuffPost Religion is to cross-post material from JPP that I think would interest a broad and general readership. Like most scholars of Religion (or Religious Studies), I tend to think that religion is actually kind of interesting. Like most of my colleagues I also assume that what we call "religion" is not so much "spiritual" as it is embedded in "culture." By culture we mean not just high art, literature, and philosophy, but also politics, as well as the ordinary round of daily social, including such things as foodways, manners, entertainment, city life and suburban living, transportation hubs, hygiene, and social and communication networks. That's what I tell my students when I try to pitch the minor or major in either Religion or Jewish Studies. I encourage them to see that religion, love it or hate it, is a social phenomenon connecting to everything we do.

Let's see if I can sell that model for understanding religion and Judaism here in the big world at HuffPost. Above all, I think I'll try to keep the tone personal.