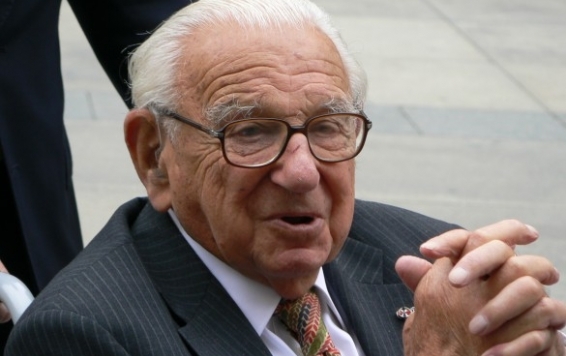 Sir Nicholas Winton in Prague in 2007

In a world filled with constant conflict, senseless violence, and seemingly endless suffering, there's a natural human inclination to feel paralyzed by the enormity of the problems we face. Many believe that there's little they can do to protect the innocent in the face of violence and persecution. Others don't view this responsibility as their own. Some simply don't have the courage to speak out or the conviction to stand up.

Yet, among the many in history who have chosen to avert their eyes and shrug their shoulders, there are also individuals like Sir Nicholas Winton - who passed away last week at the age of 106. Hundreds of children survived the Holocaust because he refused to stand idly by as the Nazis began murdering Jews in Europe. At the time, Nicholas Winton was a 29 year-old clerk who worked at the London Stock Exchange - not a particularly high-powered or well-connected man. Yet, he saw firsthand the grave danger facing Czechoslovakia's Jews when he visited the country as a tourist in 1938. He knew that if he didn't do something, the country's Jews would quickly perish if the Nazis invaded Czechoslovakia.

Winton drew up a list of thousands of Jewish children in Czechoslovakia who were eligible for special visas to enter Britain under the Kindertransports program. Almost entirely on his own, he arranged for trains to take these children out of the country, bribing officials along the way to move them out safely. He worked tirelessly to raise funds for the operation and to find British families willing to house the children and guarantee their welfare. In all, 669 children escaped. Over his long life, Nicholas Winton was able to see the wide-ranging impact of the miracle he engineered, as those he saved had thousands of children and grandchildren. The survivors and their descendants became leading doctors, lawyers, politicians, artists, and activists - each contributing in their own way to the UK and well beyond it.

After reading the many beautiful obituaries of Nicholas Winton over the past week, I've continued to wonder: what makes a hero like this? What lessons from his life can we apply to our own? How can we cultivate and support the next Nicholas Winton, Raoul Wallenberg, and Oskar Schindler to fight the plague of genocide and mass atrocities in our time?

I think that the answers to these questions boil down to one thing: you should never underestimate your individual power to make transformative global change. Winton never measured his work in the context of the millions who would suffer at Nazi hands -- he counted his success one rescued child at a time. Too often, we shirk our responsibility to fight for social justice simply because we conflate doing something we perceive as small with doing nothing at all.

The world we live in is rife with conflict and by extension, opportunities to honor Winton's life with action of our own. Violence in the Democratic Republic of the Congo has claimed more than 5.4 million lives since fighting began in 1998 - and millions continue to face violence, sexual exploitation, and slavery. In South Sudan, internal conflict plagues a people who have endured decades of war. The Sudanese regime - which committed the 21st Century's first genocide in Darfur - continues to threaten whole communities with extinction in the Nuba Mountains.

Jewish World Watch works to safeguard the innocent in each of these countries by advocating to our policymakers, educating our communities, and in many cases, providing direct support to survivors on the ground.

In today's interconnected world it's easy enough to see that millions of innocent lives are in danger. There has never been a better time for us to stop being bystanders and start being upstanders. Too often, we assume that someone else - someone with more resources, more connections, or more authority - will step in to safeguard the innocent. If anything, Nicholas Winton's example shows that each of us holds far more power to save lives than we could ever imagine.