"How're you doing celebrating Christmas?" a dear friend asked. We faced each other across my kitchen counter. His tall frame slicing the early evening light, his strong voice filling the space, the years, the differences between us.

Last year, our Jewish family started celebrating Christmas. We planted our feet in the sweet spot where traditions are made, and explanations are limited.

And I soaked these gems in for a whole year until I arrived right here, at my kitchen counter, leaning against the hard wood, reaching across warm pizza, trying to answer how I feel about adding Christmas into my (very) Jewish life.

The short answer, the easy one, is that I'm fine.

And the long one, is this.

There's a thought, a common one, that children need answers and right-nows and clearly-stateds in order to maneuver through this tricky, complicated world with as little confusion as possible.

Jason and I -- when we were young and childless and thought we knew more than anyone, really -- believed this with our hearts and our souls and our cores. So much so that at 23 years old, Jason converted from (non-practicing) Catholic to (very much practicing, but by my side) Judaism.

Just a few months before our wedding, we squished onto a small couch, poured into a tiny home, bookended by two rabbis and a clergy member. They questioned him and he questioned back and they liked him for it, so he was sure, and I was too, that this was RIGHT (in uppercase letters) for us, and for our unborn children.

And while our children were very small, this remained our very RIGHT. But as our children grew, so did Jason's discomfort.

Right now, some of you might be itching to tell me that he shouldn't have converted or too bad or think of the children or buck up or what's done is done or that religiously, we can't -- and shouldn't -- have it both ways.

And to you, I mostly want to say hush.

Because what he missed when he looked into our children's brown eyes that are mixed and blended and smudged until they're each their own shade of his cocoa and my hazel, wasn't religion.

It wasn't the kneeling and the knowing and the Sunday morning services.

What he missed was the passing of memories from his youth to theirs. Decorating trees with his siblings, picking new ornaments with his father, baking the most delicious of cookies with his mother.

And I can hardly think of anything more RIGHT than wanting their story to (also) start with his.

Some of you say that Jason and I are confusing our children, being wishy-washy, not making a decision nor passing down a straightforward and easy-to-digest path.

And you should know that we both think you're totally and completely, unwaveringly, right.

But we're okay with that.

Because what we are passing down from our hearts to theirs is that everybody has a story to tell, that everybody's story matters, and that RIGHT can -- and often does -- change.

Last night my family edged into that same kitchen counter, meats and cheeses and the finest of scotch and egg nog and Shirley Temples between us. Music played and the fireplace burned and we were warm and cozy and together, celebrating Christmas in our Jewish home.

"What was your favorite present? Did you get to have a tree in your room? What was the best part of Christmas Eve?" Our children questioned Jason like he questioned the rabbis ten years ago.

And he gave his answers the same care and thought that the rabbis gave his questions the night he converted, sitting in that small room, hair still wet from the mikveh.

He was letting them into his story, where they belong.

"Em, Tim, Derek, and I used to sleep together Christmas Eve," he started.

And there it was right before my eyes, the passing of a story, a tradition, a way from one generation to the next.

Even though this way is new to me, once we married -- because it's his -- it became mine as well. And I wouldn't have it any other way.

My old friend is the only person who's asked me how I feel celebrating Christmas.

But many, many people have asked me, not unkindly, "So what's winning? Hanukkah or Christmas?"

And the only answer I have to give (for right now), is that's not how we're choosing to play. 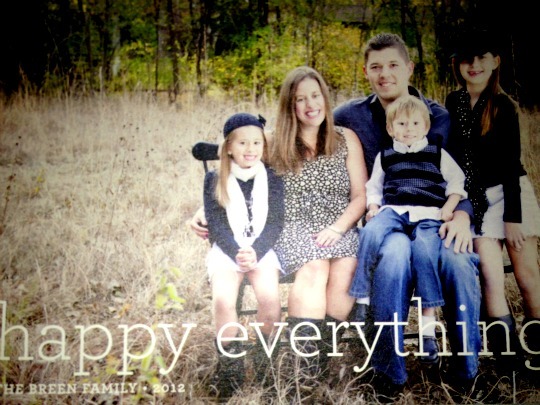