A recent survey by the Anti-Defamation League determined that 26% of Americans still believe that "Jews were responsible for the death of Christ." Though that percentage has decreased from 31% in 2011, it still accounts for over a quarter of America.

Pope Benedict XVI specifically rejected the narrative which blames Jews for the death of Jesus in a 2011 book, "Jesus of Nazareth -- Part II." He explained biblically and theologically the reasons why Scripture doesn't support the argument that the Jewish people as a whole can be held responsible for the death of Jesus. He asked, "How could the whole people have been present at this moment to clamor for Jesus' death?"

Also, a 1965 Second Vatican Council document, "Nostra Aetate," took the decisive position that Christ's death could not be blamed on the Jews as a whole at that time nor today.

Reza Aslan, a religious scholar and author of "Zealot," a biography of the historical Jesus, weighed in to the Huffington Post about why he thinks so many hold this erroneous belief.

The Gospels try to make it seem like the Jews killed Jesus. The Gospel of Matthew flat out claims that the Jews requested that the blood of Jesus be placed on their heads and their children's heads.

The Gospels were all written after the destruction of Jerusalem. A that time, Judaism had become a pariah of religion in the Roman empire, and so the gospels were primarily intended for a non-Jewish, Roman, audience. If you want to convince a Roman audience to accept Jesus, then you have to remove all blame from Rome for his death.

And so we see a steady progression from the first Gospel of Mark to the last Gospel of John, in which little by little, blame is removed from Rome and placed directly upon the Jews. This, of course, is totally unhistorical. The Jews under Roman Imperium had no power to influence capital punishment.

The 2013 Survey of American Attitudes Toward Jews in America polled over 1,200 adults, measuring their level of anti-Semitism with an 11-question index developed by the ADL about 50 years ago. 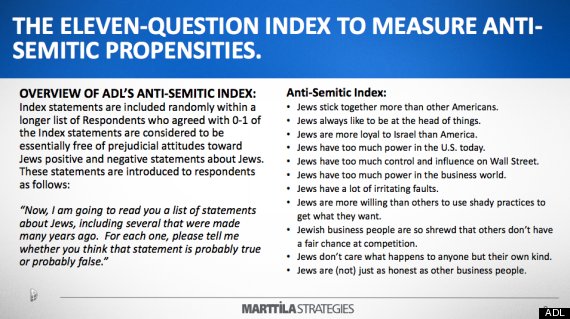 “The poll shows that while we have made great progress in promoting understanding in American society, the most enduring anti-Semitic canards continue to hold sway among some segments of the American public,” said Mr. Foxman, ADL National Director. 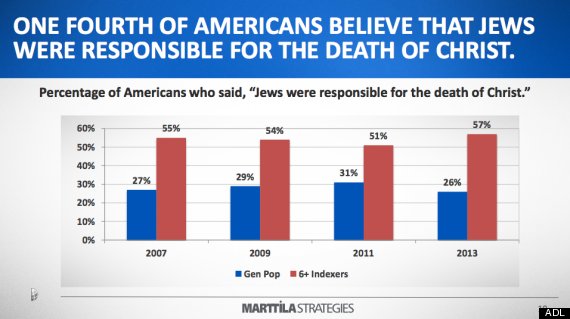 On the more positive side, the survey found that even those with deeply anti-Semitic attitudes sometimes attached positive qualities to Jews as well.

The ADL says that the margin of error is +/- 2.8 percent. See the full report here.

Belief That Jews Killed Jesus Is Held By Over A Quarter Of Americans, Reports ADL Survey On Anti-Semitism
Notable American Jews

1 / 28
Bernard Baruch
Played a role in the formation of the League of Nations with his participation in the Paris Peace Conference in 1919; helped form the National Recovery Administration, which helped to alleviate American suffering during the Great Depression. Photo: American financier and unofficial advisor to President Roosevelt, Bernard Baruch (1870-1965 ). Photo by Hulton Archive/Getty Images.
Getty Images