Some men die and seem forgotten; others die but the excellence of their personal qualities lives on for generations. Two men are in mind as I write this essay: one who is known the world over -- John F. Kennedy -- and the other likely unknown to you -- William O. McLean -- whose passing in this week as we observe the 50th anniversary of John F. Kennedy's death is a helpful reminder that Kennedy's greatest legacy was what he inspired in the American culture: an understanding of the respectful manner in which we should assist each other as one of the primary duties of citizenship.

Historians will long debate whether Kennedy was a superior president or solely a very charismatic one. For me, the answer is found in the way he changed us. When our dreams were small and being diminished by Soviet bravado in the form of sputnik, he challenged us to go beyond the orbit of the earth. With our sights set high into lunar orbit before the decade was out, Americans walked on the moon's surface. When we faced grave threat from the placement of offensive weapons in Cuba, Kennedy's shrewd assessment of human nature avoided an almost certain nuclear cataclysm were he to have followed the military advice that had urged a preemptive attack.

Civil rights legislation was congressionally stymied, yet JFK's executive orders foreshadowed the coming obligation of equal educational opportunity even if at first it had to be escorted by the National Guard.

The profound sweep of JFK's cultural influence can be seen in the many citizens he brought to the path of voluntary service. For example, after working a lifetime in medical administration, my brother Warren at age 66 was inspired by JFK to join the Peace Corps, teaching what it means to have volunteer clinics and schools and associations in eastern bloc countries that had most of these important human associations suppressed. We take the thickness of this culture for granted, yet it would not likely exist were we not convinced, as Kennedy's inaugural word remind, us that "if a government cannot help the many who are poor, it cannot save the few who are rich."

All around us we still feel the formative, fingerprints of the Kennedy legacy upon modern-day America. Most prominently, this is observable in statements of political leaders. Two recent presidents -- Bill Clinton and Barack Obama in particular -- single out John Kennedy as the spark that led to their own presidential aspirations. If Hillary Clinton prevails in 2016, her landmark presidency would also be the legacy of John Kennedy that supplied the initial thrust to crack open the ceiling that oppresses half of our population.

Yet, the Kennedy influence extends well beyond politics itself. Kennedy's gift of inclusion and nondiscrimination has been strongly planted in higher education as well.

The University of Notre Dame (IN) is one of those places that in its selection of students of good hearts and strong minds keep the Kennedy vision alive. The university's method for doing so includes things curricular as well as honorific like the Laetare medal given each year to a recipient "whose genius has ennobled the arts and sciences, illustrated the ideals of the church and enriched the heritage of humanity." Given since 1883, among its honorees are poets and painters and philosophers and one president, John F. Kennedy (not counting the beloved television president, Martin Sheen). Notre Dame students are admitted with a careful eye toward whether they have developed in their formation a calling to use their talents not just for themselves but for the needs of others. Kennedy's inaugural citizenship instruction to "ask not what your country can do for you, but what you can do for your country" fits comfortably within Notre Dame admissions spirit.

There is of course a certain irony that as we celebrate the other-regarding nature of John Kennedy, a good many congressional partisans are determined to disassemble a healthcare reform that has encountered structural difficulty helping the healthy and the strong reach out to the infirm and the weak." And there is an even sadder irony: namely, that one of life's best administrators who would never let himself be defeated by the kinds of problems that bedevil Obamacare, associate Dean emeritus William O. McLean 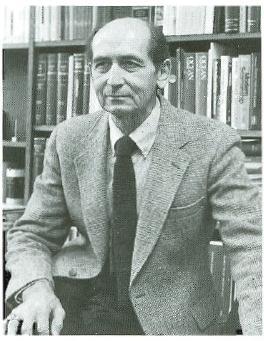 of the Notre Dame Law School passed away in this anniversary week.

Bill McLean was a problem solver of the first rank; a community builder who was careful to have all sides of a problem fairly treated... Never one to play favorites, McLean had three unquestioned loves in his life: his family, Notre Dame, and the United States Navy, in which McLean was a carrier pilot at the rank of captain for 30 years before directing and instructing in the Naval ROTC program at Notre Dame and taking up the administration of the law school.

Like Kennedy, McLean had reminders of the open sea in his office, including a maritime clock that reports the hour in bells that only sailors know how to count. The very embodiment of the citizen John Kennedy called into action, Bill McLean should simply be cross-referenced with the word "gentleman" with emphasis upon gentle and where the following gendered word never was deployed by the captain to the disadvantage of young women who came to the law school at Notre Dame in greater numbers and earlier than at many other law schools because of the initiative of Dean McLean. Ever positive in outlook, Bill McLean was a person to be admired, to be learned from, to be emulated, to be respected. He possessed, in brief, all of those elements of common ground, respect and duty that John Kennedy held out to us as necessary for "the torch to be passed to a new generation of Americans."

Today, as I see it, the defeatist word "repeal" is too often substitutes for the more constructive word, "reform"; presidential nominees are subject to partisan blockage, rather than individual assessment; those in charge protest a lack of time to consider immigration reforms, though there is very little to show for their legislative day beyond burying the hatchet usually between the shoulder blades of their opponents as they appear on Sunday shows calling for greater civility.
Well, of course, we do need a greater measure of civility or patience, especially in this moment when technology is being asked to assist millions evaluate health care options that are difficult enough on their own without the added challenges of the typical website malfunctions or skittishness of insurers who run from the marketplace when the prospects for an easy profit are moderated by legislated fairness.

It is good to honor John Kennedy's memory, but it may be even more useful to ask whether John Kennedy could have successfully rolled out the Affordable Care Act? As I see it, the answer is "yes," but only if he could continue to inspire and attract men with the qualities of a William O. McLean.

Kennedy told us in his final inaugural words that "here on earth, God's work must truly be our own." It is. Having recalled William O. McLean, God must have one heck of a mess on his hands.