Lahore -- the nerve center of Pakistan's Punjabi heartland -- got soaked in blood on Easter Sunday. A suicide bomber struck the bustling Gulshan-e-Iqbal Park in the provincial capital when it was packed with families -- scores of them Christian -- enjoying perhaps the last weekend of the city's evanescent spring before the weather warms up. At least 72 people have perished, most of them children and women. The jihadist group Jamaat-ul-Ahrar, which is a virulent offshoot of the vicious Tehrik-e-Taliban Pakistan, claimed responsibility. That Pakistan's fight against jihadist terrorism will be drawn out was known, but after the Mardan, Charsadda and Peshawar attacks, the Lahore carnage reaffirms that it will be an extremely deadly one, too.

The Pakistani state had tried to negotiate with the TTP off and on despite criticism from the country's thinning liberal quarters that the exercise would not only be futile but also give lead time to the TTP and other assorted jihadists to prepare for an eventual crackdown against them. First the military signed agreements with one after another jihadist group and then civilian governments did or tried to do the same. Upon assuming power in 2013, Nawaz Sharif's government made it a cornerstone of its policy to arrive at a negotiated settlement with the TTP, before finally giving up the thought in favor of military action in 2014. The TTP jihadists rained death on most of Pakistan but largely spared Sharif's power base of Punjab, except for sporadically attacking the minority Christians in mass attacks and systematic targeted killings of the Shia and Ahmadi Muslims. The prime minister's younger brother Shahbaz Sharif, who has headed the government in the Punjab province since 2008, is said to have actively courted the TTP to spare Punjab.

That Pakistan's fight against jihadist terrorism will be drawn out was known, but after the Mardan, Charsadda and Peshawar attacks, the Lahore carnage reaffirms that it will be an extremely deadly one, too.

The documents introduced last year in the United States v. Abid Naseer trial in New York included materials captured from Osama bin Laden's hideout in Abbottabad, Pakistan and indicated that Shahbaz Sharif offered the TTP a quid pro quo for not attacking targets in Punjab. In the papers is included a 2010 letter from the al Qaeda operative Atiyah Abd al-Rahman to his boss bin Laden, which states:

Regarding Tahreek-i-Taliban: we have informed Hakimallah and his companion Qari Husayn, that the Punjab government (Shah Baz Sharif) sent them a message indicating they wanted to negotiate with them, and that they were ready to reestablish normal relations as long as they do not conduct operations in Punj ab (in their governmental jurisdiction, which does not include Islamabad or Bandy). The government said they were ready to pay any price ... and so on. They told us the negotiations were under way.

Hakimullah Mehsud was the TTP's ringleader and Qari Husayn Mehsud was the notorious "Ustad-e-Fedayeen" or teacher of suicide bombers. They were later killed in drone strikes

The government, however, did not budge much when 15 people were killed and more than 70 were injured in the March 15, 2015 attacks on two churches in Lahore. The JuA, which by some accounts has rejoined the TTP, had claimed that attack, too. The political links that Sharif's party, the Pakistan Muslim League Nawaz, has maintained with assorted extremist groups within the Punjab province are perhaps even more important than its tacit overtures to the TTP. For example, Malik Ishaq who led the rabidly anti-Shia terrorist outfit Lashkar-e-Jhangvi, reportedly received a stipend from the Punjab government. Ishaq was later killed in a police encounter after he was rumored to have pledged allegiance to the self-proclaimed Islamic State. In 2010, the law minister of Punjab province, Rana Sanaullah, who still holds the same office, participated in the election campaign of the LeJ's political front Ahle-Sunnat-wal-Jamat (previously Sipah-e-Sahaba). The Lashkar-e-Taiba, which perpetrated the 2008 Mumbai attacks, is yet another jihadist group that has received kid-glove treatment from the Punjab government. Report after report shows that the Mumbai attack mastermind Zaki-ur-Rehman Lakhvi is living large in the Adiala high-security prison in Punjab. 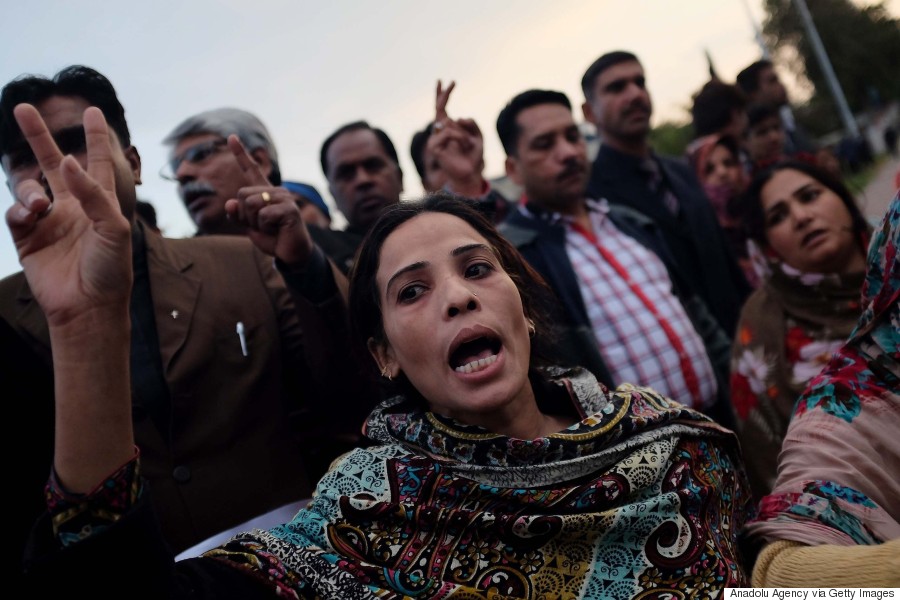 People shout slogans to protest terrorism as they attend a vigil for the victims of the suicide attacks on churches in Lahore on March 16, 2015. (Metin Aktas/Anadolu Agency/Getty Images)

While Nawaz Sharif has always pandered to his religiously conservative voter base in the Punjab province, he does not necessarily condone the extremists at all times. For example, during his second prime ministerial stint, Sharif went after the LeJ's founder Riaz Basra and earned the latter's wrath. Basra responded by trying to bomb the prime minister's motorcade outside Lahore but thankfully missed. On the run, Basra and many of his cohorts took off for Afghanistan, which was under Taliban rule then, and the Taliban, in turn, were backed by Pakistan's army, as the former army chief General Pervez Musharraf has conceded recently. And therein lies the rub. Whenever the civilian leadership has tried to act against domestic jihadists, the powerful military has stonewalled them. Over the years, Pakistani politicians seemed to have concluded that waging proxy wars through jihadist insurgencies forms a cornerstone of the military's approach to foreign policy, and, therefore, the extremists are here to stay. So civilian leaders of all varieties chose to enter into political alliances with them. Even an otherwise liberal politician like Benazir Bhutto looked the other way when in 1995 her party's Punjab wing inducted as provincial ministers two leaders of the Sipah-e-Sahaba Pakistan. The SSP was a forerunner of the LeJ and ASWJ.

The fact is that the use of irregular lashkars -- hordes -- flying the standard of Islam, dates back to the country's first prime minister, Liaquat Ali Khan, presiding over the use of a tribal cohort to launch a "jihad" in Kashmir in 1947 while the country's founder Muhammad Ali Jinnah was still alive. Brigadier Akbar Khan, an officer with a knack for intrigue, conceived the plan and Liaquat Ali Khan signed off on it, as the respected military historian Shuja Nawaz has chronicled. The cycle has been repeated over and over again with the military going ahead with its jihadist misadventures in Afghanistan and Kashmir and the civilian prime ministers like Benazir Bhutto -- whose interior minister bragged about siring the Afghan Taliban -- and Nawaz Sharif plodding along. The military's premise has been that it can use the jihadists as force multipliers in Afghanistan, where it seeks to neutralize a perceived Indian influence, and directly against India in Kashmir, while containing the jihadist fallout. The problem with this approach is twofold: firstly, to maintain a jihadist proxy force, a complete extremist nursery was created inside Pakistan, leading to rampant radicalization of the society at large. Secondly, the jihadists have their own ideological agenda. While the Pakistan army may want the jihadists to impose the sharia on Kabul, the latter want to do that in Islamabad, too. The net result is a massive jihadist ecosystem came into existence, which the Pakistani state now finds hard to fully confront let alone dismantle.

Unless the Pakistani state abandons the use of jihadism as a tool of implementing foreign policy objectives, jihadist terrorism will remain its festering sore.

When faced with the massive blowback of its jihad project gone awry, the Pakistan military had come up with the arbitrary distinction of the "good Taliban" -- the ones who attack only the neighboring countries -- versus the "bad Taliban" -- the ones who attack inside Pakistan also. The problem is that the "good" and the "bad" Taliban have remained joined at the hip ideologically and logistically. They have shared training facilities first in Afghanistan under the Taliban rule and when that was busted by the U.S. in 2001, in Pakistan's tribal areas. The Pakistan army's Operation Zarb-e-Azb, which was launched in summer 2014, has arguably been successful in liquidating the terrorist infrastructure in the tribal regions. There has been a noticeable decline in the regular terrorist attacks inside Pakistan, the carnage in Lahore and a string of bombings in the Khyber-Pukhtunkhwa province notwithstanding. The Lahore attack indicates, however, that the jihadists retain the capability of striking hard at the soft targets. Chances are that the bomber who blew over 70 innocents to smithereens had logistic support from one of the dozens of Punjab-based jihadist groups. After the Easter Sunday attack, Pakistan's chief of army staff, General Raheel Sharif and Nawaz Sharif have separately pledged to wipe out terrorism from the heartland.

While some action is expected, whether that pledge would transform into a military operation of the scale seen in the tribal areas remains to be seen. What is even more critical is if there will eventually be a reversal of the decades-long policy of using jihadists as force extenders in Afghanistan and Kashmir, which has brought common Pakistanis nothing but grief. Politicization of religion has converted it from the opium of the masses to the poison of the mankind. The then-Secretary of State Hillary Clinton had presciently pointed out to her Pakistani hosts in 2011, "You can't keep snakes in your backyard and expect them only to bite your neighbors. Eventually, those snakes are going to turn on whoever has them in their backyard." Unfortunately, while the world laments that fighting terror at home and stoking it in Afghanistan is an untenable position for Pakistan, Sartaj Aziz, a senior a advisor to the Prime Minister Sharif, casually admitted that Pakistan still harbors and facilitates the Afghan Taliban leadership. Aziz merely confirmed what the international media has been reporting: the so-called "good Taliban" are still operating out of Pakistan and Mullah Omar's successor was likely chosen on the Pakistani soil. Similarly, the India-oriented jihadists have been carrying on with business as usual. 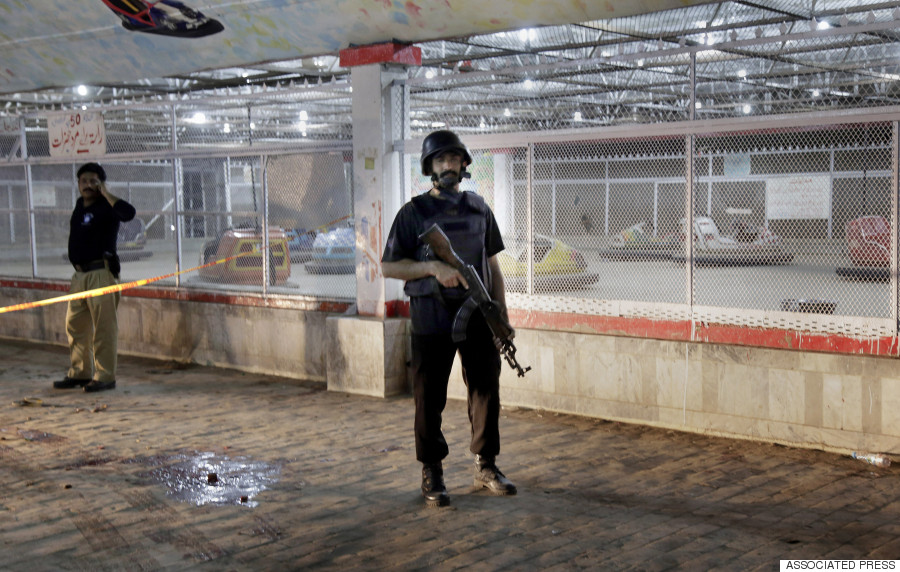 Pakistani police officers stand guard at the site of a bomb blast in a park in Lahore, Pakistan, Sunday, March, 27, 2016.

In the wake of the Lahore bloodbath, the hope was that Pakistani civil and military leadership will think long and hard and come up with a formidable action plan. Instead, the Pakistani national discourse seems preoccupied with an alleged Indian intelligence agent whom the Pakistanis claim to have captured in the restive Balochistan province. The charge against the apprehended man is that he was fomenting insurgency in Balochistan. Whatever the veracity of the Pakistani claim may be, it seems to have completely drowned out the massacre at Lahore by homegrown jihadists. On the eve of the Lahore carnage, some Pakistanis were complaining that the world media was not paying attention to the plight of Pakistan at the hands of the terrorists, as it did to the Brussels attack. Sadly, within 48 hours of the Lahore bombing the more than 70 brutally slaughtered individuals seem to have been forgotten. The Lahore bombing was not even a trending topic on Pakistani Twitter. Just when the narrative needed to be focused, it became totally nebulous.

Chasing a red herring at time when clarity of thought and action is needed does not bode well. It certainly makes it easy for the state authorities to deflect hard questions over both their past policy disasters and more immediate intelligence failures that allowed this attack to go undetected. Pakistani civil and military leaders, as well as the society, must realize what is bad for Kabul and Delhi is bad for Lahore, too. The state tolerating the so-called "good" jihadists within Pakistan in the hopes that they would only attack its neighbors has cost Pakistan's people dearly. Unless the Pakistani state abandons the use of jihadism as a tool of implementing foreign policy objectives, jihadist terrorism will remain its festering sore.