Are we alone in this vast cosmos? That's the burning question that drove Dr. Eleanor Arroway -- a fictional astronomer in Carl Sagan's book "Contact," who was played by Jodi Foster in the 1997 film adaptation -- on her epic quest for extra-terrestrial life.

And it's also motivated the career of Dr. Jill Tarter, the real-life astronomer said to have inspired Arroway's character. 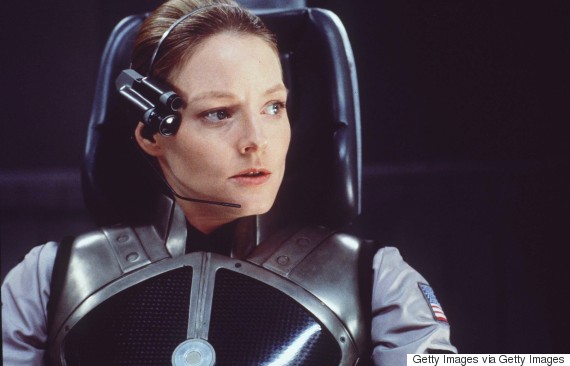 Jodi Foster as Dr. Eleanor Arroway in the film "Contact."

Tarter retired in 2012 after spending 35 years scanning the skies for alien signals, and more than a decade as director of the Center for SETI (Search for Extraterrestrial Intelligence) Research in Mountain View, Calif. But she's still actively involved in the search for life -- and is encouraging the next generation of E.T. hunters.

To learn just what Tarter is up to now, and find out what's motivated her to keep up the hunt, HuffPost Science emailed her a series of questions. Here, lightly edited, are her answers:

What makes you sure that alien life is out there?

I'm not sure. This is a question that we are trying to answer. It is as legitimate to ask of the universe, "Is life ubiquitous, or singular?" as it is to ask "How did it all begin?" "How will it end?" and "Are there other universes?" During my own career, the discovery of extremophiles and exoplanets have made the universe appear more bio-friendly, but that is not the same as saying that biology, and life-as-we-don't-yet-know-it exist beyond the Earth. This question will only be answered by exploration. That is what SETI is trying to do -- and we do not know the answer.

"If they can get here, then they are far more technologically advanced than we are, and the reality is that they will set the rules of the game."

What got you interested in the search for life?

The Cyclops Report from 1971 -- written by Barney Oliver and John Billingham -- was the result of a series of summer studies at NASA Ames and Stanford. In reading that workshop report, I was impressed by the notion that after millennia of asking priests and philosophers what to believe about life beyond Earth, the middle of the 20th century presented us with some tools that permitted scientists and engineers to do experiments to try to find the answer. Telescopes, rather than belief systems, could potentially show us what is, rather than what others said we should believe. I realized that I was in the right place, at the right time, with the right skills (undergrad degree in engineering physics and Ph.D in astronomy) to join this exploration. I got hooked, and have stayed hooked all these years.

NASA's chief scientist predicts we'll find alien life within the next decade. Do you agree?

Ellen Stofan, as NASA spokesperson, was talking about finding microbes somewhere in the solar system beyond Earth. It's a bet that I'd take, but again that's not the same thing as knowing the answer. As for any potential mathematicians out there, NASA has excluded those searches from its astrobiology program. Doesn't make logical or scientific sense, but it is a political reality.

Why do you think we haven't found it yet?

Many reasons: -- We don't yet have the right tools, and/or may not yet know the right things to look for (applies to microbes and mathematicians). -- "Beyond Earth" is vast beyond human comprehension, and we haven't yet looked in the right places in the right way. -- We have already done so, but not recognized it. -- One of two versions of Clarke's Third Law: Any sufficiently advanced technology will be indistinguishable from magic. Or, any sufficiently advanced technology will be indistinguishable from nature (this due to Karl Schroeder).

What's kept you going over decades of not finding life? Does it get disappointing?

Only the interactions with politicians and funding agencies is disappointing. The discoveries in the realms of exoplanets and extremophiles continue to excite. Our ability to search in different ways continues to improve (now at exponential rates). The question grows more, not less, important as time goes by.

At what point do we give up the hunt?

Only after searches have been systematic and inclusive enough that null results become significant -- a long way from where we are today. Practically, when humanity in all its forms of government, corporate, or private reaches a threshold of pain or indifference and is no longer willing to fund the exploration.

Should we beam out our own signals into space, for potential aliens to find?

The book SETI 2020 suggested that since we are such a young, emerging technology, we should listen first, and transmit only after we've become an older, stable technology capable of undertaking very long-term projects such as transmitting. Not all of my colleagues agree with this.

What will happen if aliens find us before we find them?

That sounds ominous. Stephen Hawking has warned that aliens might want to conquer Earth and enslave us. Do you worry about that?

Not necessarily ominous, just a reality check. If they can get here, then they are far more technologically advanced than we are, and the reality is that they will set the rules of the game. As to what their intentions might be -- I'm not competent enough to say (and neither is Stephen Hawking, as smart as he is) -- extraterrestrial psychology is a field without any experts.

"I grew a tough skin, and after being "one of the boys" for decades, finally woke up and started trying to support other females around me and under me."

NASA and other organizations want to go to Mars. Should we? And what do you think about setting up a colony there?

The dinosaurs did not have a space program. Humanity is a single-point of failure as long as they occupy only one planet. Spreading beyond Earth is a good strategy for longevity. It is however, no guarantee if we take all our old habits with us.

You've spent decades working in a male-dominated field. What was that like? Has science become more welcoming for women?

Yes, science has become more welcoming, but there is still a long way to go. Fortunately the worst offenders are dying off, and from what I can see of the younger generations of scientists, both males and females are adopting an attitude of partnership and shared responsibility towards life and work. That's a good thing, because there is growing evidence that postponing childbirth until the mother gains tenure, or partnership, or whatever goal of security/seniority, a strategy that was adopted by many of my generation and the baby-boomers, has led to significant rise in rate of learning and other disorders in offspring.

What was it like? I grew a tough skin, and after being "one of the boys" for decades, finally woke up and started trying to support other females around me and under me.

What's your role in the search for life, now that you're retired?

Attempting to raise the money to keep the searches going as long as may be necessary; something I did not succeed at while I was Director. I don't want to lose the next generation of clever scientists and engineers willing to take a chance on SETI, but unwilling to jeopardize their ability to support their families. Roller coasters are only fun as rides in amusement parks, they are a real drag in the world of funded research.

As we all know, your work inspired Ellie Arroway's character in "Contact." What did you make of the movie?

"Contact" was a fantastic movie. It has now been out there so long, that I experience many young colleagues who tell me that this movie was what inspired them to go into science. That's the best endorsement I can think of! We need a Contact II.

In the movie, Arroway gets into a pod and travels through a series of wormholes, not knowing if she'll make it back. Given the opportunity, would you get into that pod?

Yup, in a heartbeat.