Young contestants dominated the season premiere of "X Factor" on Wednesday night, from a 13-year-old Bieber look-alike, to a soulful 21-year-old mom, to a teen skateboarder boy band. And we'll admit it: we teared up more than once during the show.

Demi Lovato and Britney spears also sat at the judging table for the first time. While Demi was all smiles, fans may have been surprised by Britney's attitude: she fired more than one zingers and proved herself to be one of the tougher judges. (Next to Simon, of course.)

But the most emotional moment of the night for the audience and judges alike came at the very end of the episode, when 20-year-old Jillian Jensen walked on stage. The contestant explained that she was a fan of Demi Lovato, and got "stay strong" tattooed on her wrist -- like Demi -- after enduring bullying in middle school. She sang Jessie J's "Who You Are," and her performance brought the whole judging table to tears.

"When you sang, you broke my heart," Demi said. "I can't wait for the bullies at home to see this." 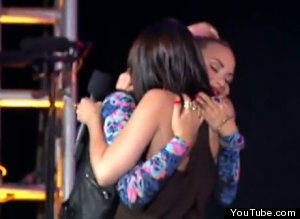 We agree with Demi -- and, apparently, so did Cody Simpson. The teen pop singer tweeted shortly after: "watching X Factor. congratulations @ItsJillJensen, that was inspiring. #StopBullying #DefeatTheLabel"

One Direction's Louis Tomlinson also followed along via Twitter, which was a nice surprise for #Directioners after the band -- one of "X Factor" UK's biggest successes -- released a surprise video to introduce the American Season 2 premiere. (In case you missed it, you can watch below!)

So, tell us: Who are you rooting for on "X Factor," and how did Britney and Demi do on their big night? Share your thoughts in the comments or tweet us @huffpostteen!