Miami artist Jillian Mayer has chewed off her own arms for Art Basel. In "H.I.L.M.D.A.," a video in Love Trips: a Triptych on Love on view at World Class Boxing this week, the artist performs as Venus de Milo. At the start of the video, the living statue has her arms in place. By the end, however, there are just bloody nubs and Mayer's smiling, blood-dripping mouth.

Removing the first arm is a clean break. Mayer simply uses her good arm to rip the other one right off. The only way Venus can rid herself of the remaining arm, however, is with her teeth. And if the sight of a young woman chewing off her own arm doesn't hit you hard in the gut, the grotesque sound effects surely will.

Mayer told the Huffington Post, "It is a critique on beauty. Venus de Milo knowingly rips her arms from her torso as a notion of self-sacrifice in order to seek beauty and worldly admiration. By making the gesture of arm removal a choice for Venus, the ideal form of Western beauty becomes empowered."

The title of the work is a play on Marcel Duchamp's L.H.O.O.Q., Mayer adds. "Like Duchamp's seminal work, 'H.I.L.M.D.A' also forces viewers to reexamine the living Venus that stands before an audience. It recontextualizes both the accepted meaning of the original work, context, and narrative." What does Mayer's acronym mean? Well, it's not a secret, but she'd much rather hear your best guess. (How I Lost My Darn Arms?)

The video triptych, Everyone's Been Lost at Sea, also includes "Temporarily Yours," which examines cinematic love scenes; and "endless lava, I wish for", in which Mayer does acrobatics within the mouth of a spewing volcano.

On the inspiration behind these videos, Mayer says "I was thinking about love in general, different phases of it, and the practices and rituals one undergoes to maintain it."

With all the attention centered on international and national artists in Miami during Art Basel, it just might take a local chewing off his or her arms to get noticed. But Mayer has a much more positive outlook. "It is a great time for emerging Miami artists to be aligned with an international art presence. Locals have the advantage of being connected to the community. We have more access to secret or off-the-map venues. Those places are potential exhibition spaces for Miami artists."

If you dare, take a peek at the photos.

See Love Trips at World Class Boxing. The collection is open through Saturday, 10am to 4pm., during Art Basel Miami Beach. Contact: 305-438-9908 or worldclassboxing.org.

Jillian Mayer: Artist Chews Off Her Own Arms For Art Basel (PHOTOS) 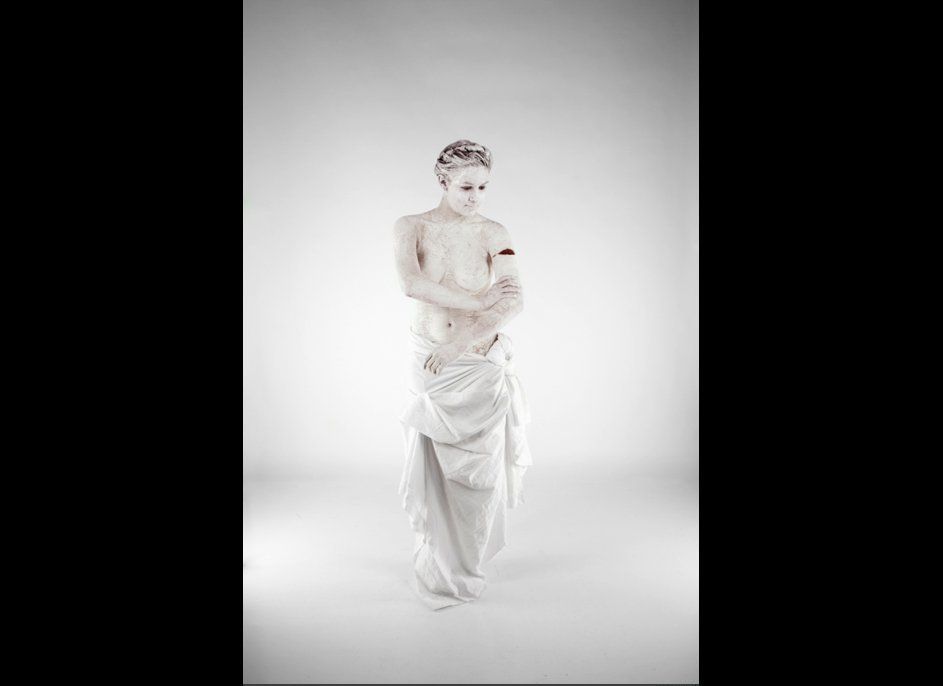