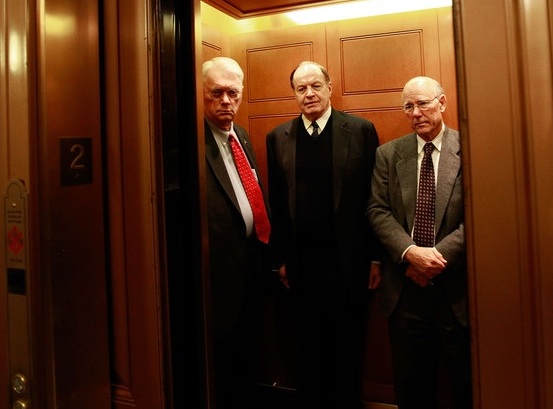 If Jim Bunning managed to do the nation one service: he proved beyond a doubt that some Senators have severed any connections they might ever have had with the rest of America, with verifiable reality itself, with ordinary human decency, or with the concept of shame.

If a single image crystallized this feeling for me, it was the sight of Bunning exercising his Senatorial privilege in the most numbingly pedantic and lordly manner: "Excuse Me! This is a Senators-Only elevator! Excuse me!" he cried as he shooed away an ABC news producer intent on asking Bunning to explain his hold-cum-filibuster on a jobless benefits bill.

Well, excuse US, Marie Antoinette! Shall we also avoid direct eye-contact with your majesty, or shall we just prostrate ourselves in the mud as you're borne past us in your sedan-chair? What a tragic fall, from Cooperstown worthy pitcher to an angry old man now apparently at large in some parallel Versailles of his own devising. From the king of the pitcher's mound to just another embittered old crank on the Capitol dunghill.

Like a lot of splenetic old right-wingers, Bunning has a well-nursed sense of personal grievance. He may have tried to throw hundreds of thousands of people off the unemployment rolls for the sake of some bullshit abstract principle he -- and almost no one else -- believed in, but Senator Jim Bunning only appears to be concerned about the personal pain felt by Senator Jim Bunning himself.

The Capitol Police, he moaned, were "doing a lousy job" protecting him from reporters like the one he shooed out of the elevator. This is pretty true to form for Jim, who is accompanied on visits back home by a phalanx of bodyguards ("there may be strangers among us..." he intoned darkly, in the true paranoid style). This is in spite of -- or, come to think of it, perhaps directly because of -- his repeated votes against raising funding for Kentucky law enforcement. Bunning reached some new climacteric of pathetic whining when he bewailed, on the Senate floor, the fact that his own filibuster had caused him to miss a big baseball game on TV.

Old, mean and right-wing: he's the oldest Republican Senator and, according to National Journal, has the second most conservative record in the Senate, after the dreaded Jim "Waterloo" DeMint. Bunning often teamed up with man-on-dog enthusiast and off-the-charts rightie Rick Santorum before Pennsylvania's voters wised up and threw that fool out. Talking to historian Taylor Branch not long after Bunning was elected to the Senate in 1998, President Clinton shared his own experiences with the ex-pitcher. Branch later wrote: "[Clinton] said Bunning, a former baseball player, was so mean-spirited that he repulsed even his fellow know-nothings. 'I tried to work with him a couple times,' said Clinton, 'and he just sent shivers up my spine....I know you're a baseball fan and everything, and you don't like to hear it, but this guy is beyond the pale.'" More tellingly, Gene Mauch -- Bunning's manager during his tenure with the Philadelphia Phillies -- seemed to think he was an ass, too.

It's the "mean" part, not the old or the right-wing aspects, that most annoys people about Bunning. Do his grandchildren flee from him in terror and in tears? How often do his relatives have to bite their tongues at Thanksgiving Dinner? No one familiar with his atrocious record can be in the least surprised that Bunning was content to be the public face of a political move that not only cannot succeed in the long run, and which intentionally immiserates and impoverishes people -- but which finally costs the government and the states MORE money.

Why would he care? It seems that so many already hate Jim Bunning, including even his ever more exasperated, equally right-wing and perceivably soulless peers on the GOP. Mam'selle Mitch McConnell, his fellow Kentucky Senator, put his own reputation on the line in backing Bunning in his 2004 reelection bid -- and this at a time when there was open speculation, based on Bunning's increasing eccentricity and obvious mental rigidity, that he might actually be suffering from senile dementia.

In case you've forgotten the evidence for that startling diagnosis, Bunning himself said that his '04 Democratic challenger Daniel Mongiardo looked "like one of Saddam Hussein's sons," and refused to debate him face-to-face. (What? He couldn't beat Uday or Qusay in a fair fight? Gene Mauch wouldn't have stood for that kind of pussyfooting). When a debate finally took place, Bunning refused to leave Washington, claiming he was preoccupied with Senate votes despite there being no votes scheduled. He appeared instead by satellite-feed, and refused to admit electoral commissioners to determine if he was being fed his answers from behind the camera. In spite of all this anarchy and tragicomic idiocy, Kentucky voters put him right back in office, so my sympathy for them is currently in very short supply. If this is the man they want to represent them in the Senate, then I just can't wait for Kentucky to secede from the Union already. The racehorses stay on our side, thank you very much.

In April, 2006, Time magazine confirmed what the political cognoscenti already believed by nominating Bunning as one of "America's Five Worst Senators," dubbing him "The Underperformer" for his dismal, lazy, splenetic and misanthropic performance in elected office, and noting his utter disinterest in topics unrelated to baseball or immigration. This lack of enthusiasm for public office manifested itself most bizarrely in his adamant refusal to attend the first week of the 2009 Congress, airily claiming he had inviolable plans with his family that week. Anybody hoping that said family might be staging a hostile intervention on behalf of their apparently brain-fried relative was swiftly disappointed. Students of Senatorial Idiocy 101 soon had their favorite test-subject back before them for continued examination -- unchanged, unapologetic and still just as mean as a snake. Only a month later he was telling constituents back home that cancer-stricken Justice Ruth Bader Ginsburg would be dead within nine months. In his inevitable apology letter, Bunning contrived to misspell Ginsburg's name. Twice.

This time around, McConnell has withheld his endorsement entirely, urged Bunning to drop out, and meanwhile scorched the Kentucky political landscape to deny funds to the barmy old pitcher. A pox on both their houses, I say -- my enemy's enemy, etc. Bunning, despite whining unconscionably about his treatment, seems to have gotten the message. Before his disgraceful performance last week, he had already opted, in the face of near-universal hostility in his own party and his home state, to retire after the 2010 elections.

After that date, we won't have Jim Bunning to kick around any more, so I plan on doing a lot of kicking while I still have the chance.