There's nothing more exciting than speaking with an individual who lives their dream on a daily basis. Jim Carrey is definitely one of those people. One of the most versatile and talented actors of our time, Carrey can effortlessly tackle comedic and dramatic roles without missing a beat. He's spent several decades entertaining audiences of all ages starring in films like Ace Ventura Pet Detective, The Mask, Bruce Almighty, The Truman Show, Liar, Liar, How the Grinch Stole Christmas and Dumb and Dumber, among countless others. These days, however, Carrey has managed to add another incredible credit to his already impressive resume... children's book author.

Carrey is the author of How Roland Rolls, a beautifully illustrated story about a wave named Roland who contemplates his own mortality. While death can be a heavy subject for kids and adults, Carrey has found a way to take fear out of the equation and as a result, How Roland Rolls has begun to strike a chord with readers of all ages. Carrey recently did a reading in New York City and signed copies of the book for over five hours, sharing that it was one of the most exciting and gratifying experiences of his life.

Carey's daughter Jane, a musician, singer and songwriter, also collaborated on the project, writing several songs for the How Roland Rolls ebook, which will be released this November.

I recently got the chance to speak with Carrey while he was on the set of Dumb and Dumber to, and he was as funny, friendly and inspiring as ever.

Question: You've accomplished so much in your career and now you have a new first -- children's book author. How long has this been a dream of yours and what was the inspiration behind How Roland Rolls?

Jim Carrey: This story came to me because I had a lot of these heavy thoughts when I was a kid. When I was growing up, there were two things going on. I wanted to make my mom feel better because she wasn't feeling well a lot of the time. And my father was very funny and very childlike and he was one of the funniest guys on the earth. Everyone would walk out of my house saying "Oh that Percy. He's insane. He's just wonderful" and then I took over and we were like a tag team.

I was two people. I was entertaining people in the living room and trying to find out the meaning of life in my bedroom. And kids don't get credit for having those thoughts and they do. They really do wonder about creation and so it was my way of relating to them on that level.

Question: When did you sense that your daughter Jane was incredibly talented too?
Jim Carrey: Jane is very subtle. She is at the very end of the spectrum from me style-wise, but she's very much like me in many, many ways. I used to drive around in the car with her and I'd play this game where I'd try to come up with the harmonies for songs and I'd sing out loud and I was pretty out there and she would sing very very quietly in the passenger seat and you could hardly hear her. And then one day I just realized, I heard her a little bit and I went, "Wow." She was still a little kid and this was a very well-formed kind of musical lick she was doing and I was going "Wow, she has actual moves, she's an actual singer." When she was in her early teens, she started writing these songs and they were so deep and so lyrically interesting and the finesse in her work and her songwriting, her melody writing is incredible. She's an amazing talent and it makes me so proud because these things keep coming up from generation to generation.

Question: You're best known for your feature film roles, but now you've become really interested in art. Can you tell us about that?
Jim Carrey: My father's talent is the thing I was infused with out of the gate and served the first 45 years of my life and then suddenly about six years ago, the art side of my talent took over and I became a painter and a sculptor. At some point, when I was in my art studio in New York, I was making a 12-foot painting and I was covered head to toe in paint. I was doing a movie at the same time, and I was hardly sleeping because I was so driven to paint and create and somewhere in the middle of it, I realized Oh, my gosh. My mother is having her time with me now. It's her turn. So, I got the best of both worlds, absolutely.

Question: How Roland Rolls recently won the Gillett Burgess Award for excellence in children's books. Can you tell us how you felt when you heard the news?
Jim Carrey: It's such an honor. It's been one of the great thrills of my life. The greatest part about it is knowing that people are going to sit down at the end of the day with their kids to read a story is just a thrill beyond what I can tell you. And the kids will love the character and look at the ocean next time and go, "There's Roland."

I had Jenny's (McCarthy) little boy Evan, who I raised for five years as my own boy and he read the story and he's 11 years old. And then a couple days later, Jenny called me and said, "Oh my gosh. The book has made such an impact with Evan." And I asked why and she said it was time for him to go to bed and he didn't get something that he wanted and he was crying and he said "Mom, you made Roland come out of my eyes." So, [there is] the idea that the next time after a kid reads about Roland, they might think of tears differently. And it's just unbelievable to me.

Question: You are the master of expressions -- can you talk about how you were able to share your expressions with illustrator Rob Nason via Skype?
Jim Carrey: We were on Skype a lot. I did the initial drawings and then every couple of days we'd get on Skype and I'd say he needs to have more expression and more joy. It's a thing I call "Boing." People get confused when I say "boing." Boing can be the holy spirit. Boing is the force. It's enthusiasm. It's that energy that makes you bigger than life and a geyser of joy. The only way to explain it to him was to show him the expression myself. It all comes from a feeling. Rob's paintings are amazing. His images are cinematic. They are incredible and they are way beyond what I expected. I'm so proud of it. Now that the book has come out, all the kids are putting their funny faces up on the website and not only the kids, but the adults too. That's the fun part too.

Question: You dedicated the book to your grandson Jackson. What did he think of How Roland Rolls?
Jim Carrey: He loved it so much. When I was in the studio with Jane recording the songs, she was holding him on her lap and I was being Roland and I was singing the songs which will all be on the ebook in November and I saw him looking at me with the funniest look on his face like "Oh my gosh. Grandpa is crazy." But I felt that moment. And sure enough, a week and a half later, he heard "Keep on Rollin'" once and Jane suddenly heard him singing upstairs and he had his plastic guitar and he sang the whole song. He knew the whole song. And he had been bitten. It was wonderful.

Question: What's it like to be back filming the sequel to "Dumb & Dumber?"
Jim Carrey: We are having such a blast. It's really fun to put the character on again. There's no sense or meaning to it -- it's just love. It's just fantastic. The Farrelly brothers are just the sweetest people ever. They are just very special guys and the combination is phenomenal. As soon as we sat down together and started writing again, after a day, we thought, Oh man, we should just be doing it the whole time.

Question: What advice can you give to parents who want to help a talented child realize their dreams?
Jim Carrey: I guess you have to sit back and see what their passion is. That's more important than anything. My father was the comptroller of a company for a long time and he lost his job when he was 51 and never quite got back on track. But he was a sax clarinet player and he was a funny guy and he was a musician and singer. But that showed me you can fail at anything. So you might as well go after what you love. And all the education in the world is great But you go to colleges a lot of time and the people who are the B students and C students are going to have brilliant businesses. And the A students are going to be working for them. Because they're the ones who dream and they're the ones who are thinking outside the box and it's so funny how it works out that way. I went to the 9th grade and my dream was more important than the education. I educated myself along the way, obviously. You can get a hell of an education through books and Apple documentaries. But you have to believe in your dream, you have to believe in your talents and find ways to make those serve people. That's the key. Encouragement without guilt. The guilt is a destroyer. You don't want to transfer your fears onto your kids. That's what I would say most of all. "My gosh, you have an amazing talent. We love seeing you express yourself." But be careful about saying, "If you don't do this you're not going to make it," because then it becomes a pressure and it's not love, it's fear.

How Roland Rolls is currently available on Amazon.com and at Barnes and Noble stores nationwide. The ebook, which includes original songs written by Jane Carrey and performed by Jim Carrey, will be available on iTunes nationwide this November. 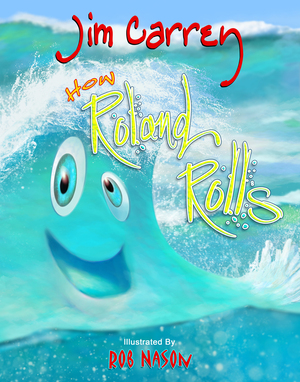 More:
dumb and dumber toParentsChildren's BooksJim Carrey comedy
Newsletter Sign Up
Raise the kind of person you'd like to know
Subscribe to our parenting newsletter.
Successfully Subscribed!
Realness delivered to your inbox

Beth Feldman is the founder of RoleMommy.com and a public relations professional.