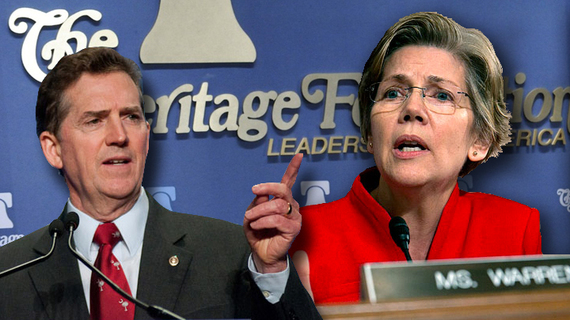 At the Citizens United Iowa Freedom Summit, I asked Heritage Foundation President Jim DeMint what issue would be his organization's top policy priority in the race to 2016. Striking a populist tone, the former South Carolina senator replied that Heritage would be operating under the banner of "opportunity for all, favoritism for none," in a fight against crony capitalism. The same theme has been taken up by billionaire oil baron Charles Koch, without irony.

Mind you that Heritage is a think tank funded largely by wealthy, right-wing foundations and corporations, including many with ties to the Koch brothers, whose political spending is projected to surpass that of either party in the 2016 race. The founding of Heritage was reportedly inspired by the Powell Memo, written by former Supreme Court Justice Lewis Powell and addressed to a friend at the U.S. Chamber of Commerce. It advocated for the business community to become much more politically active and is credited with jumpstarting the rise of the modern conservative movement.

The now-establishment right has been co-opting the populist messaging of the Tea Party and Occupy movements for some time now. Back in 2011, Frank Luntz, the GOP mastermind of messaging who was also in attendance in Iowa, admitted to a meeting of the Republican Governors Association, "I'm so scared of this anti-Wall Street effort. I'm frightened to death. They're having an impact on what the American people think of capitalism."

The public ... still prefers capitalism to socialism, but they think capitalism is immoral. And if we're seen as defenders of quote, Wall Street, end quote, we've got a problem.

Seen by many in the Occupy movement as its patron saint, Elizabeth Warren has firmly established herself as the populist crusader against Wall Street in Washington. And while Occupy may be gone, its legacy is alive within Warren, who is so popular with progressives that many are pressing her to run for president against the presumed Democratic frontrunner, Hillary Clinton. Have DeMint, Koch, and Luntz all cast their ideological lots in with Warren to fight cronyism, or is she such a great threat to their interests that are co-opting her message?