When Piers Morgan sits down with Sharon Stone for a cozy little tete-a-tete this week, viewers may be so dazzled by the set behind her they'll forget wondering if she'll reprise her star turn from "Basic Instinct."

The shimmering wall that forms the backdrop of the interview at Morgan's set in Los Angeles, designed in time for a grand parade of interviews leading up to the Academy Awards, is a smaller version of the set Morgan debuted earlier this year at his main CNN headquarters in New York.

Like its East Coast counterpart, it's the handiwork of Jim Fenhagen, a man whose work you likely know, even if you've never heard of the guy.

When it comes to set design, Fenhagen, who's the man behind the sets for Good Morning America, Piers Morgan Tonight, Martha Stewart, the Golf Channel, the NBA on TNT, The Colbert Report, The Daily Show, and ABC World News Tonight, to name just a few, is as bright a star as any of the Oscar-hungry hordes flouncing down the red carpet. Unlike most of them, however, he's a modest guy, not keen on flogging his credentials to any roaming hack from E!

When asked how many Emmys are littering the shelves of his New Jersey den, he's a little abashed. "I'm embarrassed to say, I don't know how many, but I think it's 17 or 18," he says.

We've pulled together a slide show so you can see the incredible range of his work for yourself.

John Stewart tapped Fenhagen for the original set for The Daily Show, which led to his masterful turn for the set for The Colbert Report, where alert viewers are rewarded with snarky jokes on every shelf (from pictures of failed Supreme Court justices like Robert Bork and Harriet Meiers, to tomes like Chicken Soup for the Military Soul.) The two were so delighted with the results, they asked Fenhagen to design the stage for last fall's Rally to Restore Sanity and/or Fear, and the set for The Daily Show's Midterm Election coverage.

He's also the fertile mind who lodged a stripper pole and bikini rack in Howard Stern's Sirius/On Demand set, and the man who put the pot hangers in Martha Stewart's kitchen.

The shimmering wall behind Piers Morgan on his set in New York was inspired by a Mondrian painting, "Broadway Boogie-Woogie," itself a riff on the jazz music and energy of New York.

While his workday revolves around translating the often vaguely articulated redecorating ideas of folks with big egos, Fenhagen himself couldn't be nicer, or less full of himself, a legacy, no doubt of his proper upbringing in South Carolina by an Episcopalian minister father and Southern Grand Dame mother.

Despite all the industry accolades, Fenhagen is most proud of one fan's appreciation of his work. When President Obama walked on stage for an interview with Stewart last fall, he sat down, took one look around, and quipped, "Nice set!" 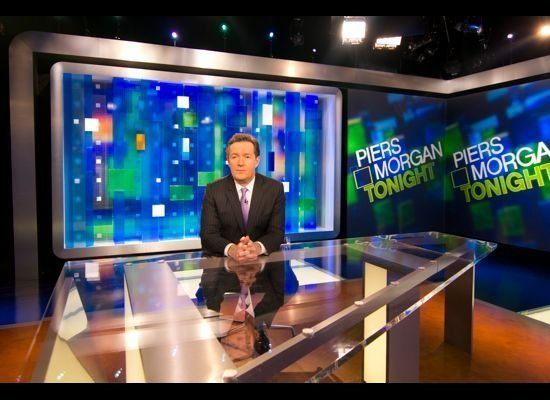 1 / 14
Piers Morgan Launches His New Show on CNN
Fenhagen's design for the set for Piers Morgan Tonight was based on a Mondrian painting called "Broadway Boogie Woogie." Images courtesy of Jack Morton Design.