Every parent lies to their kids sometimes, and comedian Jim Gaffigan is no exception. But different parents lie for different reasons.

"I've pretended to enjoy healthy food in front of my kids many times," says the father of five. "I've eaten a bagel outside so I didn't have to share it," he adds.

I know where he's coming from. I wait until my kids have had their fill of lox before making my own bagel with lox and cream cheese. But inevitably, just before I take a big bite of my glorious creation, one of them wanders back into the kitchen:

"What are you eating, daddy?"

I'M EATING THE FOOD THAT I HAVE BEEN LOOKING FORWARD TO EATING IN PEACE ALL DAY LONG AND NONE OF IT IS FOR YOU.

At least that's what I want to say. Usually I just put on the TV so I can enjoy my food. But Jim has another approach.

"Have you ever told [your kids] something's spicy when it's not spicy?" he asks me. "I'm an adult lying to a three year old."

The man's a genius. I need to work this into my repertoire.

Jim Gaffigan joins me this week on The Sporkful podcast to talk about two subjects close to his heart (and mine): parenting and eating.

Jim's new show on TV Land -- aptly named The Jim Gaffigan Show -- premiered last week. Jim's stand-up routines are famously food-centric, so it's no surprise that food plays a key role in his new show -- from frequent lunches at New York City's iconic Katz's Deli (shown below) to steaks, bagels, and much more.

"My obsession with food is executed very well," he says. "The whole episode is not about an everything bagel, but it's a very important element."

And like the Jean-Claude Van Damme of eaters, Jim does his own food stunts on the show. While filming one episode, for instance, he ate roughly 50 Fudgsicles.

"There's a spit bucket there, but I feel like the spit bucket is for amateurs," Jim says. 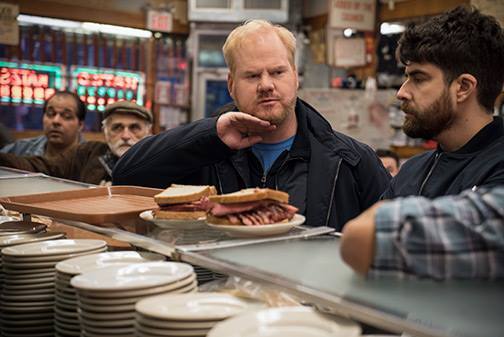 "With the buffet, there's a challenge. You initially go in there and you think, 'Oh these guys are going to lose their shirt,'" he says. "After about 10 minutes you think, 'These people are trying to hurt people. They need to be stopped.'"

I agree that the people who run buffets are evil, but not because they feed us too much food. It's because they're always trying to rip us off. Jim and I get deep into buffet strategy, and I lay out my methods for defeating the almighty Buffet Master.

More:
KidsParenting Jim GaffiganeatingFood
Newsletter Sign Up
The Morning Email
Wake up to the day's most important news.
Successfully Subscribed!
Realness delivered to your inbox