But jokes about your own religious beliefs somehow push the line between funny and offensive, making room for laughter and, occasionally, sharp commentary.

That’s the philosophy behind “The Jim Gaffigan Show,” a new series premiering on TVLand on July 15 featuring Jim Gaffigan, the popular stand-up comedian known for his Comedy Central special and the books “Dad Is Fat” and “Food: A Love Story,” and his wife, Jeannie.

The husband-and-wife team say their Catholicism — with its daily prayer, weekly Mass and rosary recitation with their five kids — is such a part of their own lives that not including it in their work would be dishonest.

“It’s part of the story,” said Jeannie Gaffigan, an executive producer of the new show and Jim’s frequent collaborator. “We are just trying to portray our reality.”

That reality ends up looking a lot like an accurate portrait of American Catholicism. As portrayed in the series, Jeannie is a more knowledgeable and reverent Catholic than Jim. Their church’s pews are only about half-full, and many members of their parish are little old ladies waiting for a moment with a priest who was born in a foreign country.

In an episode titled “Bible Story,” Jim says of a Bible given to Jeannie by the pope for her tremendous service to her parish: “Catholics don’t read the Bible. That’s why they give us Cliff Notes on Sunday.”

That joke is a perfect example of the couple’s philosophy on what makes religion funny — or not. Jim is not making fun of Catholics, Jeannie said; he is making fun of himself as a bad Catholic. It is his point of view from the inside of the joke, not from the outside, that makes it work.

Ken Chitwood, a scholar who writes about religion and popular culture, said Jim Gaffigan’s comedic inner voice is key to what is new and different about this show in terms of religion — it presents a TV family that is simultaneously sacred and secular, funny and poignant. 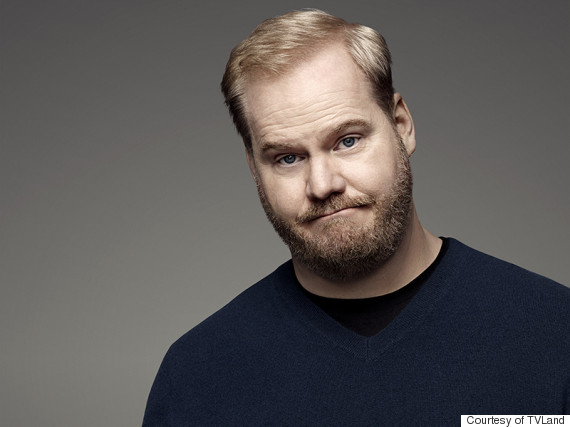 “They are not this super holy, sanctimonious family,” Chitwood said. “They kind of hold their Catholicism lightly (in terms of humor). They are able to show Jim as this new kind of Catholic — he is mainstream, he is funny and he is friends with Chris Rock.”

Both Jim and Jeannie Gaffigan are from large Catholic families — she is the oldest of nine, he the youngest of six — and both attended Jesuit universities: Marquette for her, Georgetown for him. Both fell away from regular church attendance in college, but Jeannie returned after moving to Manhattan’s Lower East Side in the 1990s.

The couple met on the street near the Basilica of St. Patrick’s Old Cathedral in Lower Manhattan, where they eventually married and had their five children baptized.

Still, she was the more devout of the two. “Jim told me that the first time he went to church in New York was after he met me,” she said.

He also routinely credits her with being the “better Catholic.” One of his standing jokes is that she is so devout she is a “Shiite Catholic.” That makes its way into the series as well, as does the fact that all seven Gaffigans live in a two-bedroom, five-floor walk-up near their church, where they attend Mass weekly.

The couple have long been commended by critics — both religious and otherwise — for their clean brand of humor. And “Dad Is Fat” was notable for several vignettes that dealt with the couple’s faith and their decision to have so many children. In a chapter titled “Six Kids, Catholic,” Jim (with Jeannie at the computer) writes, “I remember saying that as a teenager to people when they asked how many children were in my family. There would always be a beat after I said, ‘Six kids,’ for the person to silently speculate about the size of our family; then I would give the explanation, ‘Catholic.’”

Then the couple offer up something any pope, bishop or priest would approve: “I guess the reasons against having more children always seem uninspiring and superficial. What exactly am I missing out on? Money? A few more hours of sleep? … I believe each of my five children has made me a better man. So I figure I only need another 34 kids to be a pretty decent guy. Each one of them has been a pump of light into my shriveled black heart.”

Writing about the book on CatholicVote.org, Steve White said: “However indirect a role his Catholicism plays in his comedy, it’s undeniably there. His audience picks up on that and absorbs it as if by osmosis. Gaffigan is implicitly making the case for the reasonableness — and, truth be told, beauty — of the Catholic view of family.”

But to think that the couple’s comedy is a kind of evangelism is to miss the point, said Jeannie Gaffigan.

“This is not a Christian show, preaching to the choir,” she said. “We just wanted to do something that would be funny for everyone and show our reality. Jim and Jeannie go to church. They live their lives as Catholic, churchgoing people. They are not preaching to anybody, they just live by example. And they struggle.”

1 / 10
Thou Shalt Not Kill. Seriously, Stop It Already
(<a href="http://www.theonion.com/articles/god-angrily-clarifies-dont-kill-rule,222/" target="_hplink">Read The Full Story Here</a>)