Friday was a great day for Jim Obergefell.

The Supreme Court ruled in his favor in Obergefell v. Hodges, a decision that legalizes gay marriage in all 50 states.

The lead plaintiff in the case also got a congratulatory call from President Barack Obama live on CNN.

"I just wanted to say congratulations," Obama said in the call, which Obergefell put on speakerphone. "Your leadership on this you know has changed the country.” 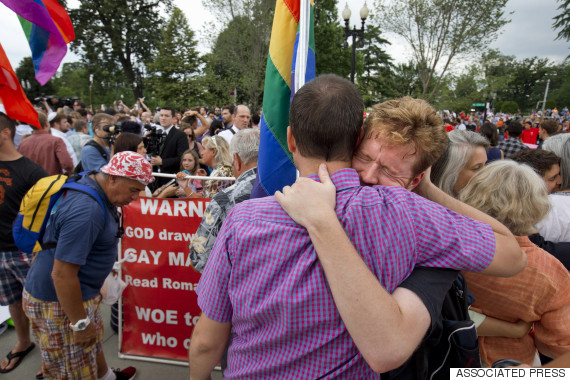 Obergefell told Obama he was happy to "become a part of the fight" for marriage equality.

"It’s really been an honor for me to be involved in this fight and be able to fight for my marriage and live up to my commitments to my husband," Obergefell said. "I appreciate everything you’ve done for the LGBT community and it’s really an honor to have become a part of that fight."

It's unclear if Obama knew his conversation was being broadcast on national TV.

Obergefell wanted to be listed as the surviving spouse on his husband's death certificate. He married his partner of two decades, John Arthur, in 2013. Arthur died in October of that year from ALS.

The couple married in Maryland, where gay marriage was legal, Gawker notes. But their union wasn't recognized in Ohio, one of 13 states where same-sex marriages were banned.

Several dozen other gay plaintiffs from Kentucky, Michigan, Ohio and Tennessee joined Obergefell in the fight to have same-sex marriage recognized across the country. 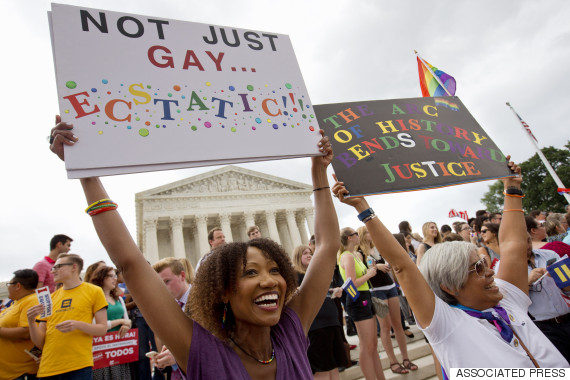 Ikeita Cantu, left, and her wife, Carmen Guzman, of McLean, Virginia, hold up signs as they celebrate outside of the Supreme Court on Friday. The couple was married in Canada in 2009 when gay marriage was illegal in Virginia. (AP Photo/Jacquelyn Martin)

As a presidential candidate in 2008, Obama said he supported civil unions but not same-sex marriage.

In 2010, after a California court found a law banning gay marriage unconstitutional, Obama's Senior Adviser David Axelrod reiterated that the president was still opposed to gay marriage and believed it was an issue for states to decide.

As time went by, the president said, his position was "evolving." Finally, he came out in 2012 in favor of marriage equality.

"I've always been adamant that gay and lesbian Americans should be treated fairly and equally," Obama told ABC's Robin Roberts at the time. "I have to tell you that over the course of several years as I have talked to friends and family and neighbors when I think about members of my own staff who are in incredibly committed monogamous relationships, same-sex relationships, who are raising kids together, when I think about those soldiers or airmen or Marines or sailors who are out there fighting on my behalf and yet feel constrained, even now that Don't Ask Don't Tell is gone, because they are not able to commit themselves in a marriage, at a certain point I’ve just concluded that for me personally it is important for me to go ahead and affirm that I think same sex couples should be able to get married."