Dean Pelton may be wildly inappropriate at times, but he kind of makes us want to enroll at Greendale Community College and be a "Greendale Human Being." Behind the kooky costumes and thick-rimmed glasses lies a man who is every bit as wildly inappropriate -- and as in love with Joel McHale -- as the character he plays, Jim Rash.

If there's one person who can save the impending fate of low-rated "Community", it's the Dean.

In this week's episode of NBC's quirk comedy, "Documentary Filmmaking: Redux," the school board asked Dean Pelton (Rash) to make a new commercial for the school, and of course, he enlists the study group to star in his production. As he gets swept away with the project, more of the student body is pulled into the fray, including Greendale alum and genuine celebrity Luis Guzman ("How to Make it in America").

Here's what Rash had to tell The Huffington Post about the Dean and his relationship with Jeff, fanatic chaos theories and being intimidated by John Goodman.

This is your first season as a series regular. Congratulations! How have you been adjusting to your new status?

It's been great. I was so happy that they wanted to see more of my face around here. Now I'm here almost every single day -- whether they want me to or not.

Dean Pelton is a fan favorite as well. You know, I'll never understand why "Community" isn't more popular, but it really does have a fanatic cult following. They're really dedicated to Greendale.

Yes, and it's rabid. I don't know if I've ever been on a show that has had that kind of reaction. Maybe it's because technology has advanced, and now people can be in constant communication with each other and they can blog about it, especially with "Remedial Chaos Theory" where there were multiple timelines. People went crazy with theories. It was like "Lost." They were trying to decipher which time line was real and what that means for the rest of the arc. This season is all about plotting out these overall arcs, so fans are starting to put these little pieces together. It will get even more exciting as the season continues.

Do you believe any of the remedial chaos conspiracy theories?

It's so interesting to me to see how everyone interprets that episode. There were a few fans on set recently who were talking about it, and they were talking about how in Jeff's timeline, when Jeff leaves to go get the pizza, it erupted into dancing and everyone was having a good time. And then when Troy left, it turned into the worst-case senario, when Annie falls and the fire starts. All of that chaos started because Troy wasn't in their lives for that brief amount of time, so I think it's kind of telling of who those characters are. Troy is becoming a man and really coming into his own, and meanwhile, Jeff is trying to figure out who he is and he's going to be dealing with a pretty big loss soon, so his timeline might indicate that. It's just so interesting that there are so many different theories. I don't know many other shows on television that are comedies where people are dissecting it like that. We talked about "Lost" like that, not a half-hour comedy.

We're really getting to see more of the Dean this season. That must be exciting for you.

As we went into the third season, I was super excited to learn more about the Dean and peel back some stuff. This year, all of these characters are going through some emotional stuff, which has been great, but it's a fun way to also show them questioning who they are. I feel like that's been the overarching theme this year. We've done very Dean-centric episode this season, and it's all about the Dean questioning himself, and that's always exciting to explore.

You've also put in some screen time with John Goodman this season too. What's in store for the Dean and the Vice Dean?

He's awesome. He's definitely doing at least six episodes this season. That first episode that we did together, though, was pretty awesome. It was fun to watch him, but like always, when I watch a really good actor like him, I start questioning myself. I can't watch him anymore. The foundation has been set, and the Dean has certainly crossed the line, and it's going to keep building until the season's end, and Troy is going to be involved somehow. That's all I can say.

The Huffington Post interviewed Joel McHale a few months ago, and he said that he's very tickled by you, so I need to know: are you tickled by him?

I feel like this is another form of Facebook poking. He tickled me, and I will click on tickle back. You know, in the last episode, Joel and I got to spend quite a few scenes together, and hanging out with him between takes and on set has been the even bigger perk of the job. I feel like Joel gets overlooked for the job he does on "Community" when it comes time for those awards, and hopefully that will change with Season 3. To be the anchor of the show and shine the way he does, that's a huge thing, especially around all of this. I think the writers are great at showing the vulnerability of the Jeff character. So, yeah, he's a good guy.

"Community" airs Thursdays at 8 p.m. ET on NBC. Watch a clip from this week's episode below. Additional fan ideas to help "Community" are certainly welcomed below. Share with the class.

Wazzup? Can't get enough of this epic study group? Check out these set pictures below. 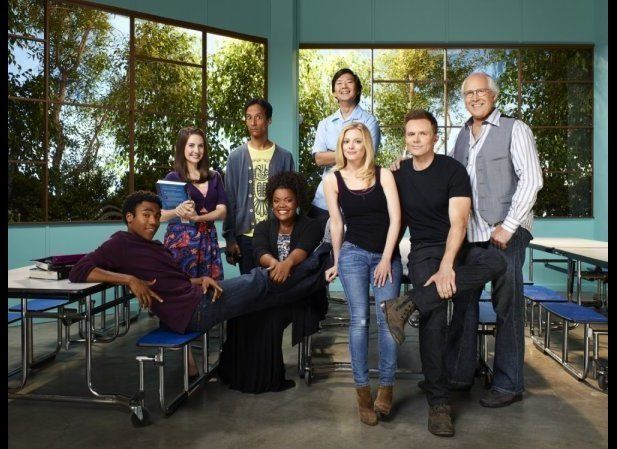