In many ways President Carter's greatest work has come after his presidency and has been mostly centered on giving back to the global community. In addition to the worldwide humanitarian efforts of the Carter Center, President Carter has become the face of Habitat for Humanity since his first involvement in 1984. He raises funds and awareness and once a year takes part in the Jimmy Carter Work Project "blitz build."

In 1998, my wife Maddy and I went to Houston, Texas to take part in one of these home-building projects. The experience was unusual in ways that I would never have imagined. I'd gotten the idea to join the Habitat build through my private meetings with President Carter in Atlanta, where he had invited me to help him brainstorm the topics for his The Virtues of Aging book. It was a steaming Sunday in early June when Maddy and I arrived alongside some five thousand other volunteers. I was naturally anxious; other than a bookshelf or two I had never built a thing with wood. During the orientation that day we learned that the plan was to build a hundred houses in just five days. There would be about forty people on each house. The rest--some one thousand volunteers--would cook meals, run errands, and haul trash.

President Carter respectfully reminded everyone that he was there to work, not to socialize, and it soon became apparent that he meant it when he told the gathering, "I have a job to do." Like all of the volunteers, I had brought my own belt and tools and paid a $250 fee to be part of this unusual experience. Each house had four adept crew leaders, ten to fifteen construction pros, around ten somewhat handy volunteers, and another ten or so folks who were like me--pretty much unsure which side of the hammer to hold. 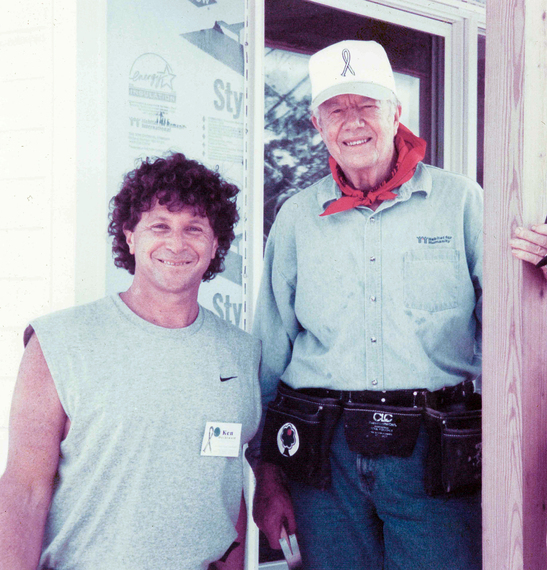 Anyway, we showed up at 6:30 a.m. on Monday and Maddy and I were thrilled to learn that we'd be working on house number one alongside Jimmy and Rosalyn Carter. As the hot Houston sun was rising, our team gathered in a circle on the black tarmac next to the lot where the house was to be built. Everyone bowed their heads and President Carter offered a short prayer and then we got to work. Early in the morning it was already so hot and humid, within an hour I felt like I was going to have a stroke. But I put my discomfort aside and joined the torrent of hammering, lifting, and nailing that had commenced. Remarkably, near sunset the entire frame was in place. I, however, was ready to go AWOL. It had been over a hundred degrees for hours, and my arm ached from swinging a hammer all day. I glanced at the then seventy-something former president. He was banging away like a pro, and I wondered how long he could keep it up. After another work break, I was spent. But the president was still pounding away.

First thing the next morning, we had a lot of wood that needed cutting. But with only two power saws on the site, some would have to be cut with a handsaw. You guessed it--President Carter stepped up and had hand-cut twenty two-by-fours in the time it took me to cut ten. By 4:30 p.m. of the second day in the blistering heat, the entire work crew was spent. Nearly all my fingers were damaged and bleeding. But Carter kept right on toiling, well past the dinner hour.

House number one was proceeding so fast that by the third day all eyes were on us. I was fascinated that our pace was being driven by a gray-haired "old" man who said very little -- but worked so diligently. It became clear to me that Carter's leadership style did not involve barking at people or being critical, but quietly motivating everybody on the site to want to keep pace with him.

Wade and Shalina Gibson, the young couple who with their three children were going to live in the house, worked with us on the build. You could see it dawning on this low-income African-American couple that they were soon going to have their own house, and that it was being built by a former president! While on the site, I liked to ask my fellow volunteers why they were taking part in the build. Almost everybody had the same answer: They didn't feel whole inside unless they took some time to help others. And for this group, it wasn't about writing a check; it was about giving a chunk of their life.

For example, at one point, I was up on the roof laying down tar and shingles. A young man and woman toiled beside me. I assumed they were brother and sister, so when we began chatting, I was surprised to learn that they were a recently married couple. I asked them when they had gotten married and they proudly said: "Saturday!" "What?" I said, "This is your honeymoon?" And they responded that they couldn't imagine any better way to get a marriage off on the right foot.

By twilight on the fourth day, we were laying sod and planting trees, then finally installing carpets and appliances. At 3:30 p.m. on Friday -- right on schedule -- we were finished. We had built a charming two bedroom home! President and Mrs. Carter brought us inside the house for a ceremony, and as our group of forty coworkers and new friends stood together holding hands it hit everyone pretty much at once that we had just done a wonderful thing. Exhausted and filthy but with full hearts, we huddled as President Carter said a prayer and turned to Wade and Shalina and gave them a white linen-covered Bible--the first book for their first house. The gesture was so powerful; the emotional intensity in the room went up a notch, if that was possible.

President Carter faced Wade and asked, "Do you know what Jesus did as a young man? He was a carpenter; he worked with his hands. By allowing us to build your house, in a small way you've allowed us to do the work of the Lord." Although three hundred pounds of muscle, Wade started to cry like a baby, as did his wife Shalina. Pretty soon we were all crying. It didn't even matter what particular religion any of us subscribed to--the feelings we all shared were deeply spiritual.

Before our group broke up, President Carter urged all of us who are fortunate in life to never forget those who are not. He spoke of the blessing of giving, how the harder he and Mrs. Carter work the more blessed they feel by the results.

Giving of himself, the president has told me, makes him stronger. "Every time we thought we were making a sacrifice for others, it has turned out to be one of our greatest blessings," he's reflected. "In other words; we have gotten more out of it than we have put into it. You just try it, even if it's nothing more than going to a public hospital and rocking a baby for two hours a week. It's an expansion of life, an encounter with new people who are potentially friends. And so, it's a learning process, an exciting process that gives new and expanding life experiences."

During one of the meetings when I was helping President Carter clarify a chapter in his Virtues of Aging book, I said to him, "President Carter, I have a crazy question for you. I'm about the age now that you were when you were president. Have you come to any new perspectives about what matters in life, now that you're older?" His answer was to the point: "Earlier in my life I thought the things that mattered were the things that you could see, like your car, your house, your wealth, your property, your office. But as I've grown older I've become convinced that the things that matter most are the things that you can't see--the love you share with others, your inner purpose, your comfort with who you are and your commitment to doing what is good and what is right."

I am truly honored -- blessed even -- to have the good fortune of having President Jimmy Carter as a role model. He's a very special man.