It almost happened, at least according to a report in the Los Angeles Times. Per the paper, outgoing Academy of Motion Picture Arts & Sciences president Tom Sherak wanted Fallon to host the 85th annual Academy Awards with Lorne Michaels acting as producer. (In addition to working with Fallon on "Saturday Night Live," Michaels also produces the comedian's late night show, "Late Night With Jimmy Fallon.") Unfortunately, negotiations hit a snag and no deal could get worked out before Sherak's exit; the long-time Academy president ended his tenure at the head of the AMPAS this week when Hawk Koch took his position.

"I couldn't meet that deadline, so I stopped all negotiations," he said to the Times, without confirming whether the negotiations were with Fallon and Michaels.

Of course, things might not be so black and white: The Academy Awards air on ABC, and Fallon hosts his late night show on NBC -- in direct competition with ABC's Jimmy Kimmel. Offering a counterpoint to the Times, Deadline.com's Nikki Finke quoted unnamed source at ABC who basically said Fallon would host over the network's dead body. (ABC apparently didn't object to Michaels' involvement.)

As Variety notes, ABC doesn't have approval over the Oscar telecast host despite airing the festivities, however the network still partners with the AMPAS on the broadcast. In an op-ed for the trade paper, Jon Weisman wrote that if anyone from the late night circuit was going to emcee the Academy Awards in 2013, it would probably be Jimmy Kimmel. (Kimmel is hosting the Emmy's next month; they air on ABC.)

All of which is to say, the task of finding an Oscar host is probably back at square one; but don't be surprised if news on which star takes the stage at the 85th annual Academy Awards happens sooner rather than later. After all, Deadline.com broke the news that Eddie Murphy was hired as host of the 84th annual Academy Awards on Sept. 6, 2011.

For more on the possible Fallon negotiations, head over to the Times. To find out more about AMPAS politics, hit Deadline.com.'

UPDATE, Aug. 8: Speaking with Matt Lauer on the "Today" show, Fallon confirmed that he won't be hosting the 85th annual Academy Awards. "I'm not gonna do the Oscars," he said. "I was honored to be asked by the Academy, but it's not my year."

PHOTO GALLERY
2013 Oscars: Who Should Host?
Download
Calling all HuffPost superfans!
Sign up for membership to become a founding member and help shape HuffPost's next chapter
Join HuffPost

Jimmy Fallon, Oscar Host? Comic May Have Been Asked To Emcee Academy Awards; Lorne Michaels Could Produce
2013 Oscars: Who Should Host? 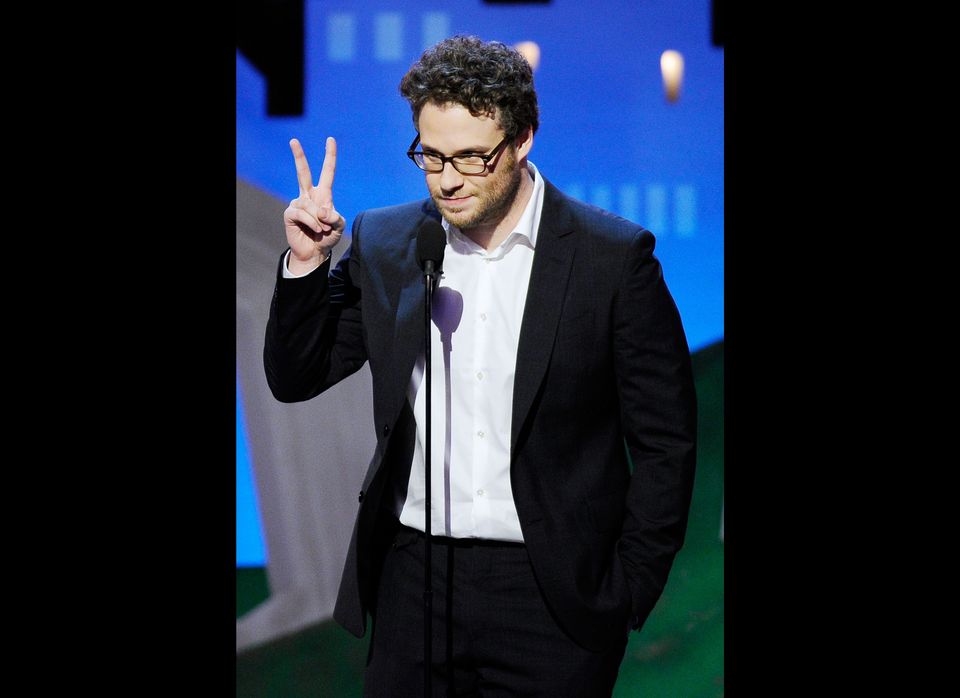 1 / 11
Seth Rogen
Logic would dictate that Seth Rogen is a terrible choice to host the 85th annual Academy Awards. After all, his shaggy-dog performance at the Independent Spirit Awards on Saturday night was unfocused, meandering and much too laid back for "Hollywood's biggest night." <a href="http://news.moviefone.com/2012/02/27/billy-crystal-black-face-oscars_n_1303861.html?ref=moviefone" target="_hplink">He also doesn't do blackface</a>. But Rogen <em>is</em> hilarious, as his joke about why Brett Ratner would have worked as producer of the Grammys can dictate. "At the Grammys, you can literally beat the shit out of a nominee and be asked to perform twice," <a href="http://news.moviefone.com/2012/02/25/seth-rogen-independent-spirit-awards_n_1301891.html" target="_hplink">Rogen said</a>. More of this in 2013, Academy! (Photo by Kevork Djansezian/Getty Images)
Getty