Last month, Jimmy Kimmel called on kids and parents to send in Rainbow Loom bracelet creations so that he could get an entire Suit Of The Loom made to wear on his show. One video that Kimmel received in response changed the direction of his project in a wonderful, inspiring way.

It was from 7-year-old Max Wilford who is battling brain cancer. "I'll help you make your Loom Suit if you help me make my longest necklace in the world," Max challenged Kimmel. Max, his family, and classmates are collecting Rainbow Loom bracelets for a fundraiser called "Super Max's Loom-A-Thon Against Cancer." The kids at Max's school, Arroyo Elementary, also sent Kimmel a video (shown in the clip above) explaining why he should meet and help their friend.

On Wednesday night, Kimmel sported his loom suit on air, and welcomed Max to the show. Max got to meet Iron Man, found out he'll soon be going to Disney World, and got his own "Super Max" Rainbow Loom cape. The best part? Kimmel's 42R suit is now being auctioned on eBay with proceeds going to The Max Love Project. 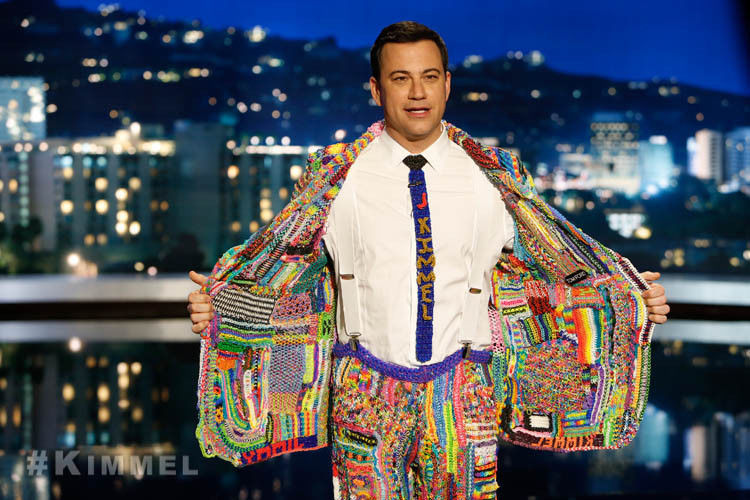 According to the Loom-A-Thon's crowdsourcing page the goals are as follows:

2) Raise desperately needed funds for the CAM Center at CHOC Children's, forwarding our advocacy for access to pediatric integrative medicine.

The fundraiser is part of the MaxLove Project, a nonprofit dedicated to assisting families fighting childhood family with funds or support.

Another special guest of Kimmel's tweeted her love for Max:

As of Thursday afternoon, Max had raised $2,616 for the Loom project. He plans to construct the enormous Loom necklace on March 1. Though for now, he's still reveling after appearing on the King Of Late Night's show.