Christmas around the world is celebrated differently. Some countries celebrates close to American Christmas and some doesn't celebrate Christmas at all. Here is some fun facts you might not know about.

In south-Europe they celebrate Christmas quite different than European countries in the north. While families in north often have Christmas dinner at home evening December 24th, many of the southern Europeans are going out to the finest restaurants to celebrate.

Though Christmas is not a national holiday In Japan, Christmas parties are held around Christmas Day. Japanese Christmas cake, a white sponge cake covered with cream and decorated with strawberries, is often consumed. Christmas threes- and lights decorate cities and malls. Sometimes they also exchange gifts.

Christmas in Cuba was banned from 1969 to the late 1990s. Today it's a one-day public holiday.

Mele Kalikimaka can be translated from Hawaiian to mean Merry Christmas. Mele Kalikinaka is also a song recorded by Bing Crosby and The Andrews sisters

Christmas in the Philippines is one of the biggest and is broadly celebrated. The country has earned the attribute of celebrating the world's longest Christmas season, with Christmas carols heard as early as September 1th.

The Trafalgar Square Christmas tree in London has been an annual gift to the people of Britain by the city of Oslo each year since 1947, as a gesture of gratitude for British support of Norway during the Second World War. 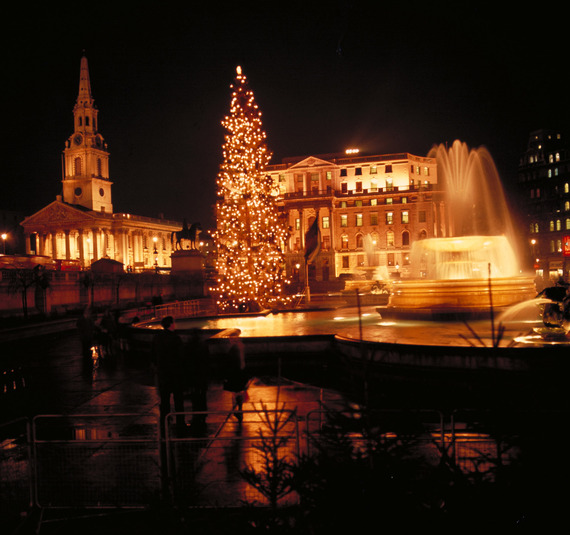 Some Europeans eats Turkey as Christmas dinner, but many also eat local traditional food like ham, seafood and lamb. Stuffed Turkey is more popular as a course for New Year dinner than Christmas dinner.

The Scandinavian countries like to celebrate Walt Disney-Christmas. They listen to American Christmas-carols all December and on Christmas Eve, before dinner, people watch Mickey Mouse and Donald Duck on TV.

In France they like to eat snails and Foie gras at Christmas, and it's often served with red wine. Many also drink champagne during Christmas.

The official Christmas and holidays in Russia lasts from December 31 th to January 10th. Christmas is normally celebrated on January 7th. The date is different because the Russian Orthodox Church uses the old "Julian" calendar for religious celebration days.

In the Muslim world they don't celebrate Christmas, and many Muslims who lives in western countries request that their children not attend to Christmas functions at school. However, some Muslim countries have shopping malls where they use traditional western Christmas decoration.

India was a British Colony until 1947 and many traditions stayed including Christmas. Christmas is a state Holiday in India even when only approximately 2,3 percent of the population are Christians.

Boxing Day is a holiday traditionally celebrated by Great Britain and mostly by other former British colonies the day following Christmas Day, when servants and tradesmen would receive gifts. Known as a Christmas box, from their bosses or employers. Today, Boxing Day generally takes place on December 26.

In Brazil the Christmas Day on December 25th is a national holiday. Despite Brazil celebrates Christmas in the warm tropical summer weather in December, they as well have decorations with themes of winter and snow.

The Rockefeller Center Christmas Tree is placed annually in Rockefeller Center, in Midtown Manhattan, New York City. The Swarovski star, made by German artist Michael Hammers, has topped the tree since 2004. It's 9.5 feet in diameter and weighs 550 pounds.