This is a story of Technology, Immigration to America, China, Real Estate, the Internet and one man's journey over more than 30 years. He roamed from Beijing to a small town in the middle of nowhere USA and back to a big city again, New York City. But most of all, it is a story of Education and how that one man's of experience of education in China, then in America, heavily influenced his entrepreneurial direction benefiting both America and China.

There's no doubt about how badly hurt the American economy and by extension, the global economy were hurt by the real estate/mortgage/banking crisis of 2007. There is no disagreement that it was near cataclysmic for economies everywhere.

And the real estate component--so badly mismanaged by government--was central to it happening. What if there had been enough qualified buyers and not so many desperate sellers? What if there hadn't been so many home-buyers approved, who had no business owning homes they couldn't afford?

So our story begins with one man with an idea. Jin Zhao was born in China but schooled in America. 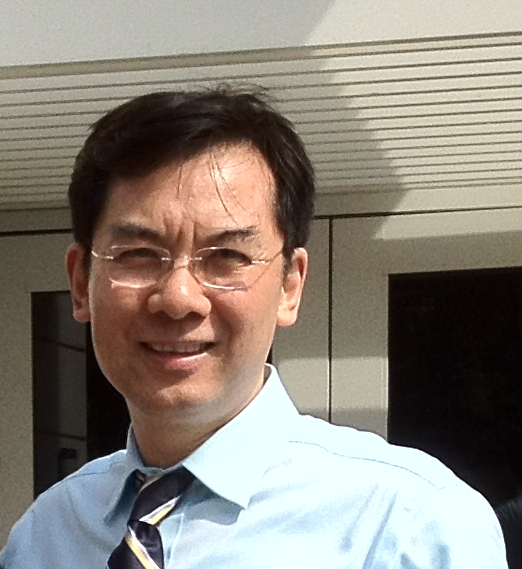 Born in Beijing in 1958, Zhao had two older sisters. His father was a minister in a local agency of the government. "Dad passed away when I six years old and mother became the leader of the family. Mother was an administrator in the Beijing Housing Office," Zhao recalled. This would be just one more element of real estate in the story of Jin Zhao and his newest company, JinList many years later.

Zhao's real education began when he came to tiny, oft-confused for its bigger Ivy League brethren, Cornell College in Mount Vernon, Iowa--a town of 4,583 in 2013.

"In 1977, both my sister and I passed the university acceptance exams in Beijing," Zhao told me, a hint of pride sneaking into his voice. "I began studying comparative literature at the Beijing University of Foreign Languages--I just loved English! I had a teacher from New Zealand that made English come alive for me and I perfected my English by listening to Voice of America." Zhao received his B.A. in 1981.

"In my fourth year, I started thinking about coming to the US and I had a strong curiosity about Capitalism and how it worked. They told me in order to learn about Capitalism properly, I had to get into economics. And that meant I had to learn math," Zhao told me ominously. So learn math he did. "I taught myself calculus," he continued, "and got accepted to Cornell College in Iowa."

I wondered if going to a small Midwestern college instead of a big-city one, didn't turn out better for Zhao. I think for a newcomer it's much better, comfortable and gives a truly "American experience" to go to a small town in middle America compared to going straight to a massive metropolis like New York, Los Angeles or Chicago.

But besides learning about economics and finance, Zhao had been undergoing an incremental transformation; from Chinese Communist to American Capitalist. And he loved the process.

So much so, that he began thinking long-term about how to connect the two shifting sands economies for the better of each.

Before that crusade however, Zhao had to get his business career in America off the ground. An associate position at Morgan Stanley led to a vice presidency after four years at Credit Lyonnais, where Zhao started the Structured Securities Department which he grew from zero to over $1.5 billion. Another year as a SVP at PaineWebber International Asia (now UBS) morphed into Zhao starting his own software company, which he ran happily until it was acquired nine years later.

Naturally, a conversation then began within Zhao about how much the Chinese would want to buy US real estate. "When I came to the US, I had been told it was ravaged by crime. Everybody in China was saying how dangerous America was and how there were drive-by shootings, gangs and bodies piled up in the street. When I landed in Los Angeles for the first time, I was blinded by the brightness, the sun was shining and how great it was here ... how much opportunity. And the education here is so superior to what's available in China. The education here is so cherished by people like me."

So Zhao's intensity about American education is what makes this story, his story, so centrally about Education.

"Buying real estate in the US, gives the Chinese something they can't have in China," Zhao observed strongly. "'You've got to own the land' is the way many Chinese feel. The clean air here in America, the blue sky, top universities, clean water, safe milk and you can see the ocean. The universities are truly great here. You can leave your kids a legacy of property in America and see them get a top education. Perhaps most of all, there's the Constitutionally protected property rights."

Real estate seemed to Zhao to be the physical embodiment of freedom and of clean living and of pride of ownership and of legacy. Legacy is an important Chinese concept going all the way back. And, the ownership of real property as well as educating one's children are central to that legacy. 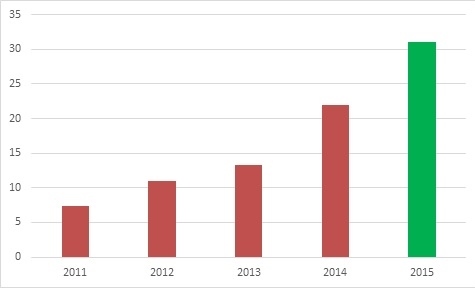 To vertically and horizontally integrate all of these components and intricacies into one holistic Internet portal was the only way Zhao could think of to bridge the chasm. So Jinlist.com was born two and a half years ago and has been in development ever since. "I wanted to build a professional marketplace for real estate professionals here in America which would connect them with Chinese investors," Zhao told me. 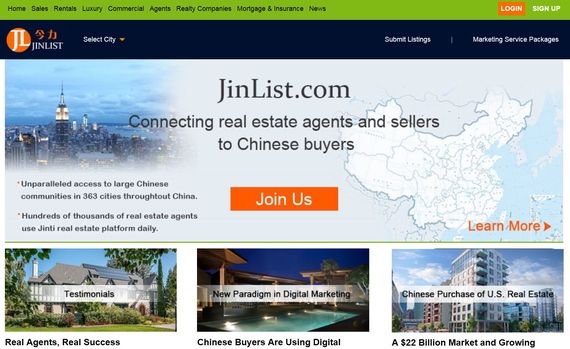 After building the marketing platform and online portal, Zhao started beta testing Jinlist here in the US in early 2014 and has offices in New York and Shanghai.

One of the first crucial 'to-dos' for Zhao was to create an online platform that would become a language translation expert. The Chinese would need to have the American-English real estate ads translated perfectly to entice and lure them. "I started Jinti.com first and that was the Chinese interface. Then, with a lot of help and programming, I turned it into JinList to Americanize it and put an English user interface on it." 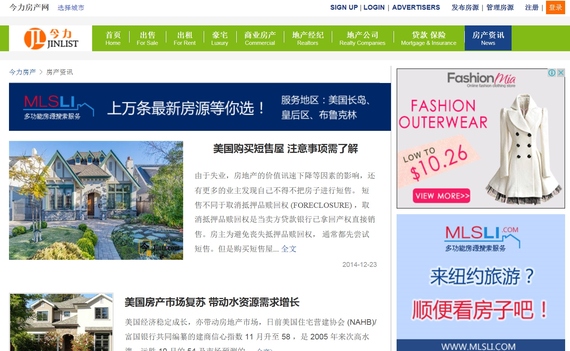 Though JinList has a broadly priced selection of properties, Zhao's initial thinking is that the properties featured initially should be relatively high-priced properties which will attract the attention of the very wealthy Chinese investors. 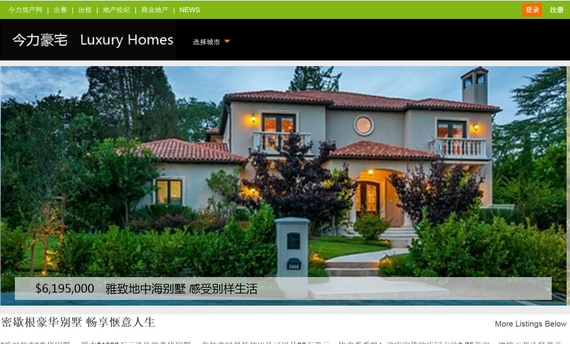 Zhao said, "I wanted to grab the opportunity to work with individual real estate brokers at the big brands like Douglas Elliman, Corcoran Group, Coldwell Banker and others and then have the word travel through the ranks of other brokers." Zhao has had some early success in this strategy and has apartments and houses for sale and rent in 363 US cities and is moving briskly into commercial properties such as retail stores and industrial land.

Partnerships with big developers such as Tishman Speyer are also in the works. "Property developers are very interested," Zhao offered persuasively, "starting with the small to medium-sized developers and moving right up to the big ones." 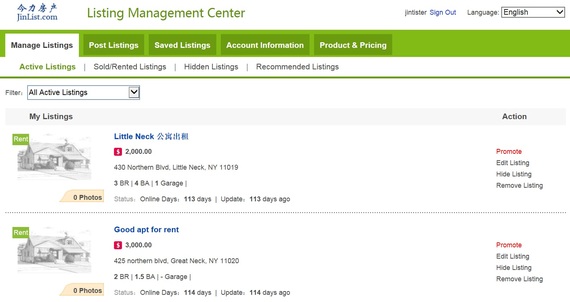 Another element of the high-potential for JinList is the US EB5 visa program. This unique government program is specially designed to offer foreign investors who make sizable capital infusions into American businesses and create identifiable, discernible numbers of real, full-time jobs, the ability to relocate here on visas with fast-track citizenship and bring their families along for the ride. "An online real estate site which offers the EB5 has tremendous revenue possibilities," Zhao stated unequivocally, "the EB5 program is very much treasured by the Chinese."

Zhao told me he went through the regular immigration process here in America and became a proud US citizen in 1994.

And I decided that Jin Zhao was doing this for all the right reasons. It is because of this that I believe he and JinList will more likely succeed.

"I do this for America," Zhao said patriotically, "because I've benefited from being here in America, getting educated here and my family is here."