Jitters set in as my husband and I drove down a country road bordered by shoulder-high corn. The few homes we saw had no visible street numbers.

Then we saw two black balloons tied to a mail box. We had not, as I had feared, overshot the location for my 30th high school reunion. My school colors were black and orange, and the school mascot was the Black Knight. More than a dozen cars were parked on the grass near a barn, and we soon spotted a sign saying, "Welcome, Van Buren High School Class of 1982."

But dispelling the jitters was hard. My stomach jumped as much as it did several years ago before I sang solos in a community musical. This was Aug. 4, 2012. I had not been back to a high school gathering in 25 years. I was not worried about how I looked or whether my resume was prestigious enough. I was worried that this whole thing might be a tad too awkward. Part of it was my fault.

Just days before the reunion, I posted a blog entry about high school and wrote about just how different I felt because I was the only Jew. My last significant memory of high school was reddening in discomfort when a pastor led us in prayer at my graduation ceremony. As I walked to the barn for the reunion party, a slightly, more painful memory resurfaced. In my American history class, my teacher lectured for a few minutes about the Holocaust. A boy behind me whispered in my ear, "Kike." He whispered, too, that his grandfather hated Jews and belonged to the KKK.

I never reported that incident to my school system, where church volunteers taught classes about Christianity during the school day through sixth grade and where pastors led us in prayer at Christmas and Easter assemblies.

Heading toward the barn housing the reunion party, I plastered a smile on my face. For a moment, I took the hand of my husband, whose mother had escaped the Vilna ghetto, but lost her parents and younger brother during the Holocaust. Inside the barn, 20 graduates from the class of 1982 sat around tables or stood in small groups. The boy who whispered that anti-Semitic slur was not there.

To my surprise, my jitters quickly turned to joy. I did not recognize everyone, but saw a lot of familiar faces greeting me with warm smiles. I went from person to person and exchanged hugs and in many cases, pecks on the cheek. We introduced our spouses and partners and tried to avoid staring too hard at name tags, which included our high school yearbook photos.

Some peers showed normal signs of middle age -- less hair, more weight, crow's feet around the eyes. Others looked like they had just stepped out of the senior yearbook on display inside the barn. In some ways, I still felt different. I was among the few who had not come back for previous reunions. My parents left the area in 1988. I could not talk like a local. I did not remember the country roads that well. I did not even know that cheesy potatoes were a staple at local barbecues. In 1982, I went to college near Chicago, a six-hour drive away, and lived in at least half a dozen places since college graduation in 1986. Most were in big cities. 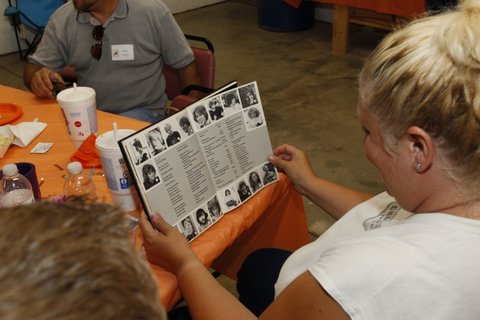 This was not a typical high school reunion, I'm sure. We went to a tiny school that was part of a rural school system housed on the same campus. Most of my classmates had gone to school together since kindergarten. I joined the school system in fourth grade. We did not just share the latter half of childhood; we shared the majority of it. I hugged peers with whom I played softball in elementary school, played basketball, ran track, created the yearbook, and marched down the football field in pouring rain.

After I bared a little of my soul about high school in a blog post, some classmates emailed me with their stories. Some said they, too, felt different, though for other reasons. Some wrote about their own trepidation about coming to the reunion. Some worried that they were not successful enough.

At the reunion, there was no mass unveiling of accomplishments or failures. We learned about each other in bits and pieces in small groups. At one point, I chatted for at least 20 minutes with a classmate. She confided that she loved my essay about the reunion. In high school, she said, she had been painfully shy.

"Really," I said. "I don't remember that. All I remember is you were so sweet."

She smiled and said that she had never known how hard it was for me to be the only Jew.

"You were always smiling," she said.

After reading my essay, though, it made her wonder about her own children's high school, which holds baccalaureate services led by a pastor. Parents run the event, not the school, and the service is an optional event separate from graduation. She wondered if it made some families feel left out. Maybe, I said, but it was not as bad as my own experience -- a minister led prayer at the only graduation ceremony. 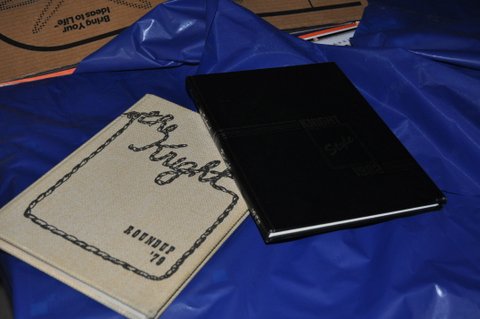 Two of our high school yearbooks.

I bonded closely with this classmate and with others from my graduating class, including a former cheerleader I always admired from afar because of her beauty and poise. She carries herself with that same air of confidence she had as a teen. But unlike when I was a somewhat gawky teen, I was not intimidated. We connected on a common bond -- motherhood.

The journalist in me saw a beautiful story in another classmate's recounting of where he is now. After high school, he went to work in a factory and thought he would never attend college. But a medical issue forced him to quit his job. He just earned his associate's degree and now plans to get his bachelor's degree and become a social worker.

I ran out of time to find out the stories of all of my classmates. About a third of our class made it for the reunion. Some purposely stayed away. At least one was too ill to attend. Each of us had our own reasons for going or for staying home.

I live nearly 800 miles away in a suburb of Boston, where country roads are scarce and landmarks are plentiful. I feel more at home where I am than I ever was in Ohio. But for me, my 30th high school reunion was a wonderful, pain-free return to my past. When my husband and I drove away from that barn on a country road, I left with no regrets. 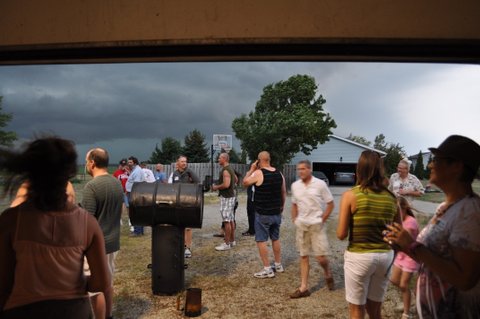 A thunder storm approaches toward the end of my 30th high school reunion. We're storm watching more than mingling at the moment. Photo taken by Pavlik Mintz.