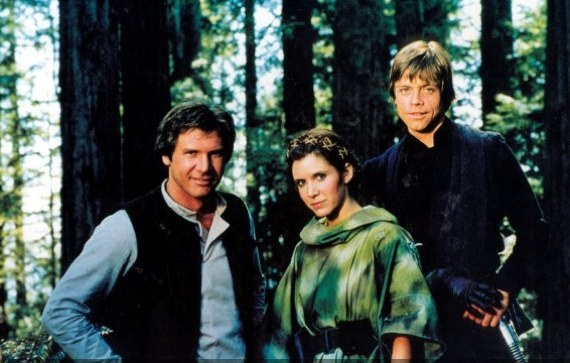 In January, it was announced that J.J. Abrams will become the third man whose last name isn't Lucas to direct a Star Wars movie. (If that confuses you, please note: Lucas did not direct The Empire Strikes Back or Return of the Jedi.)

I've been thinking about this announcement a lot. I mean, much more than any healthy human being should be thinking about a topic that doesn't affect him or her directly.

The overwhelming majority of talk about Abrams' hire centers on the fact that he's already directed two installments in the rebooted Star Trek franchise. I understand that fans of both franchises get emotional about such things (I do!), but the issue is mostly irrelevant -- at least to me.

What I have been thinking about is the relationship between Star Wars and its directors. And Abrams is the most qualified of any prior Star Wars director -- including George Lucas. (Before "Star Wars," Lucas did direct two well-reviewed films, "THX 1138" and "American Graffiti," but his 1977 resume can't really match Abrams' 2013 resume, which includes both "Star Trek" films, "Super 8," "Mission Impossible III" and many television credits, including the pilot of "Lost.")

Lucas made it clear from the beginning that he would direct all three prequels, so the last time we experienced "The Hunt For A Star Wars Director" was back in the early 80s. After burning out on the original Star Wars (or A New Hope, if we must), Lucas swore that he wouldn't direct again. He kept that promise until The Phantom Menace.

Irvin Kershner, best known for directing The Eyes of Laura Mars, was the offbeat choice to direct the second Star Wars installment, The Empire Strikes Back. That film wound up being a masterpiece, but can you imagine the Internet Outrage if someone like Kershner had been chosen today to direct Star Wars VII?

I interviewed Kershner shortly before he passed away and he said he had been offered Return of the Jedi but turned it down. "After working for two years and nine months doing 'Empire' and having it take so much out of my life and having given me so much," Kershner told me, "I felt that it was a complete experience and it was time to move on." After flirting with the likes of David Lynch, Lucas settled on a British director by the name of Richard Marquand -- best known at the time for directing Eye of the Needle, starring Donald Sutherland -- to helm Jedi. (Marquand, sadly, passed away after suffering both a stroke and a heart attack in 1987 at the age of 49.)

I've always been fascinated by the contrasting directorial styles of Kershner and Marquand. By most accounts, Marquand concerned himself more than Kershner did about what Lucas wanted. Marquand famously said, "It is rather like trying to direct King Lear with Shakespeare in the next room." In other words: yeah, Lucas was around a lot. By comparison, Kershner was pretty much on his own, filming in Europe while Lucas stayed in the United States to manage the financing of the film. In fact, Lucas directed second unit on Jedi but directed only one short scene in The Empire Strikes Back. (According to J.W. Rinzler's The Making of the Empire Strikes Back, Kershner paid tribute to Lucas by insisting that he direct the scene in which the medical droid 2-1B hands Luke Skywalker his flight jacket and says, "Take care, sir.") I bring this up because, when it comes to Episode VII, Abrams is likely to be in control the way Kershner was.

Over the weekend, I reached out to Joe Johnston, who directed Captain America: The First Avenger and worked on the visual effects of all three of the original Star Wars films -- including creating the design of Boba Fett. I wanted to ask him about the difference between Kershner and Marquand. "I think there's a lot we don't know about all those relationships," Johnston admitted. "I think George was occasionally frustrated with the coverage Kershner shot. He refused to shoot a master, a cardinal sin in George's book." (A master shot is "a single shot that includes the complete scene from its start to the finish.")

Johnson continued: "For Jedi, [Lucas] may have wanted to make sure he had a director who was a little more amenable to George's requests, but this is all conjecture on my part. We saw a lot more of Marquand in pre- and post-production than we saw of Kershner -- I got the sense he was very much interested in the process itself, the creation of the visual effects. George's attitude has always been that the film is made in the cutting room and production is a process of assembling the raw material. My guess is that George saw Marquand as a guy who could go out and amass the great-looking footage that George would mold into the film in post."

In 2010, I asked Jeremy Bulloch (who played Boba Fett in Empire and Jedi) about the difference between the two men's directorial approaches. Bulloch said, "Irvin was wonderful because you knew, as an actor, exactly what he wanted. He'd occasionally say, 'Come on, come on,' and you could see he was saying we had to get this shot in. Richard Marquand I'd met before and he was a lovely man. He said, 'Jeremy, you know, you were in the last one, you know what to do. Don't you?' I said, 'Well, yes, I do, but it's always lovely to have the director say, 'No, no, no, that's wrong.' I quite like that. Because if you're an actor who says, 'Well, what I do is obviously what is best,' it's sometimes not right. I think it's wonderful having a director leading you through." This, to me, was Bulloch's nice way of saying, "As an actor, I preferred Kershner."

Neither Kershner nor Marquand were an obvious choice to direct Star Wars, though one made a masterpiece and one made a relatively good Star Wars movie. I mean, compared to Kershner, Marquand and even Lucas, J.J. Abrams brings with him the strongest pre-Star Wars résumé -- by far. In the mid-'70s, Lucas was pretty much an independent filmmaker with just two small films to his name, THX-1138 and American Graffiti. Kershner focused on the story and characters, which is what makes Empire great -- in other words: the effects are just there to support the characters. But that combination (i.e. his lack of visual effects knowledge) could have gone horribly wrong.

The Star Wars movies, as popular as they are, have never had strong directors on paper. (Lucas, as important as he's been to filmmaking over the last 40 years, has directed only six movies. Three of them you most likely complain about quite a bit.) For the six existing Star Wars movies, we've pretty much been taking our chances with (A) a guy that has only directed two movies not called Star Wars and (B) two choices that are certainly not conventional.

Joe Johnston's name was thrown about as a possible Star Wars VII director (and there is still hope that he may make a Boba Fett movie). If anyone knows what goes into making a good Star Wars movie, it's him. Of Abrams' hiring, Johnston says, "J.J. Abrams is the perfect choice to get the third trilogy off the ground. These films are big logistical nightmares to direct, like any $150 million plus project. They're like military operations in the attention to detail required while trying to retain a grasp of the big picture. J.J. has more than proven he can handle the pressure, plus it doesn't hurt to have a guy at the wheel who has produced, written, and created shows of his own. If anything he may be overqualified." Johnston wanted to be clear that his "overqualified" statement was a joke, but, he's right: Abrams is overqualified in comparison to past Star Wars directors. This is a good thing.

And, yes, then there's the fact that Abrams has directed two Star Trek movies. I only mention this because this is the Internet, so I have to. Who cares? If Robert Wise had been chosen to direct Jedi, would anyone have given a shit? Other than to point out, "We will probably get a boring Star Wars movie but, boy, that 20-minute shot of the "Millennium Falcon" will be gorgeous." (These would be the lens-flare jokes of 1983.) Other than the fact that Trek enhances Abrams' résumé - an impressive one that also includes Mission Impossible 3 and Super 8 -- I don't see why this should be an issue for anyone.

I'm not saying Abrams is guaranteed to direct a great Star Wars movie, but the signs are good: he has his own headstrong style (like Kershner), loves strong characters (like Kershner) and possesses a vast knowledge of special effects (like Lucas). At this point, I just don't understand how any Star Wars fan wouldn't be excited about Abrams, considering he's the first director in the history of the franchise who, you know, is actually qualified.