Gwyneth Paltrow was apparently none too pleased when Joan Rivers and the "Fashion Police" crew dissed her style choices on the E! show.

Rivers sat down with Andy Cohen for "Watch What Happens Live" on Wednesday, April 16. When a caller asked about the worst backlash Rivers had ever received from her celebrity style criticisms on "Fashion Police," the 80-year-old revealed it was from the GOOP founder.

"The worst criticism was, ugh, Gwyneth Paltrow," she said, sticking out her tongue. "She came in and yelled at us, but she stood up, she can't sit down, because she's got a stick up her rear-end. The 'World's Most Beautiful Woman,' voted by Hellen Keller and Stevie Wonder ... not my favorite."

This isn't the first time Rivers has said Paltrow isn't her favorite. She expressed the same sentiment after hearing about Paltrow's split from Chris Martin.

"Gwyneth is not my favorite person," she told paparazzi at LAX last month. "Maybe if she had eaten a little more, and wasn't a vegetarian or a vegan, and wasn't farting, it would've lasted."

But Paltrow has gotten in a jab as well. While speaking with Harper's Bazaar about trying Botox, the actress said she wouldn't do it again. "I looked crazy. I looked like Joan Rivers!" she quipped. 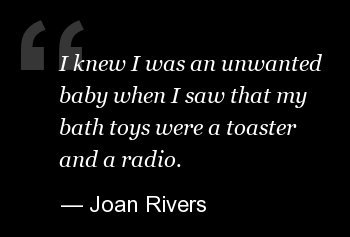