Since President Bill Clinton's September 5 speech to the Democratic National Convention, a great deal of attention has centered on his claim that, since 1961, the "jobs score" during seven Republican and six Democratic presidential terms amounts to 24 million for the Republicans and 42 million for the Democrats. The fact checkers have given these numbers their approval (see, for example, the Bloomberg verdict andThe Tampa Bay Times PolitiFact evaluation), although some critics (e.g.,The Washington Post) have questioned whether they are meaningful as a verdict on policy differences between the two parties.

There is little political disagreement that manufacturing jobs are crucially important: a recent report by the President's Council of Advisors on Science and Technology underscored the importance of manufacturing to the "future ability of the United States to innovate and invent new products and industries, provide high quality jobs to its citizens, and ensure national security." In Pennsylvania, Republican Governor Tom Corbett's Manufacturing Advisory Council concluded that manufacturing was "the foundation on which Pennsylvania's economy was built and the driving force that provides family-sustaining wages for Pennsylvanians."

These assessments are borne out by the numbers: manufacturing accounts for about two-thirds of all U.S. exports, almost 90 percent of the export of goods, and over three-quarters of export growth over the last year. Manufacturing firms account for about two-thirds of private research and development. Manufacturing contributes to economic activity and employment in other sectors more so than any other industry. Despite its long decline, manufacturing still accounts for 12 million production jobs and sustains a wide array of service, sales, and supply chain employment. Manufacturing accounts for more than 10 percent of employment in 19 states, and more than 10 percent of gross product in 31 states. It is a central economic asset of the nation's cities. And manufacturing is especially important as a source of good jobs -- those that pay a decent wage, and provide some health and retirement coverage -- especially for those without a college degree.

Just as important, manufacturing workers along with manufacturing-intensive states and regions are critical politically. They make up a large part of the so-called Reagan Democrats, the "forgotten majority" of white non-college workers. These voters (especially the men) are often decisive in presidential elections. Little surprise, in this respect, that rust-belt states like Ohio, Pennsylvania and Wisconsin, in which the past and future of manufacturing is so important, have become such key battlegrounds in electoral politics.

To calculate the manufacturing jobs score across presidential administrations, we went back to 1948 and analyzed manufacturing employment growth (or decline) in all post-World War II presidential terms: nine Republican and seven Democratic. We also did what we could to address one of the objections to the numbers used in President Clinton's jobs score: for which period of time should a president be considered "responsible" for job changes. We ran our manufacturing numbers by presidential term three different ways to see whether our findings are robust across alternative methods.

The second method is similar, although it uses annual (rather than quarterly) employment averages. A year of data is more statistically robust than three months, and, as Princeton political scientist Larry Bartels argues, it takes a lag of a year for each new president's policies to take effect.*

Our third method holds each administration accountable for the changes in manufacturing employment from the first year of its term to the last year of its term. Thus, no president is held responsible for changes in manufacturing employment between the last year of one term and the first year of the next. This is a shorter window of responsibility but allows us to avoid any time when the succeeding administration's policies may impact the data.

Since we don't have data yet for the end of 2012 and for 2013, we use the most recent data available for President Barack Obama's administration -- the last 12 months of data in methods two and three and the last three months for method one. If following recent trends manufacturing jobs continue to grow over the next 18 months, Obama's record could look slightly better.

We chart our findings at Manufacturing Jobs Score:

A couple of caveats are in order. First, the backdrop for all of this is a long, secular decline in manufacturing. Over time, the increases in employment get smaller and the losses get steeper, yielding the net decline summarized in the following table: At just under 12 million jobs, manufacturing now accounts for less than 10 percent of the nonfarm workforce, down from 30 percent in the early postwar years and 20 percent as recently as 1981. Value-added in manufacturing, which accounted for over a quarter of GDP into the late 1960s, is now about half that. 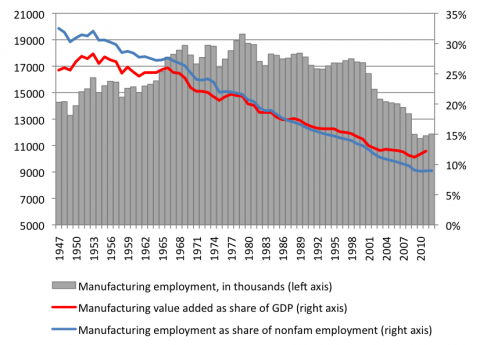 (Authors' analysis of Current Employment Statistics (for employment) and Bureau of Economic Analysis (for value-added) data.)

As manufacturing declined, so too did the wages of workers with modest educational attainment. In the 30 years since 1980, the median wage for a white male worker without a college education fell by over 25 percent, from almost $16 per hour to under $12 per hour. Wages fell under both Democratic and Republican administrations, but, on average, they fell twice as fast (using measures one and two) when Republicans were in the White House.

A second caveat: some of the partisan differences we found reflect accidents of timing rather than policy priorities. The dot.com crash of 2000-01, for example, pushed most of its recessionary losses onto the balance sheet of Bush junior; had that bubble popped a year earlier, Bush's numbers would have improved and some of the boom would have faded from the Clinton side of that business cycle.

Some observers will want to focus on Obama's record. Here's what we found on that score (using, as noted, the most recent available numbers for Obama). Based on all three of our measures, Obama's manufacturing jobs record is currently better than eight of the nine Republican presidential terms. President Ronald Reagan's second term does slightly better than Obama's incomplete first term, but the numbers are close enough that this may change once we have all the numbers. An interesting question is what Obama's manufacturing jobs record might have been had he not intervened to save General Motors and Chrysler.

What explains our striking findings for manufacturing employment trends under Republican and Democratic presidents?

Differences in macroeconomic policy certainly seem a plausible part of the explanation. Clearly, the manufacturing job losses in Reagan's first term were related to the effort to drive inflation out of the economy, which was led by Federal Reserve Board Chair Paul Volcker. More recently, the Recovery Act that the Obama administration navigated through Congress (without a single House Republican vote) played a critical role in limiting the amount of additional manufacturing job loss after the first part of 2009. In the last two years, the Obama administration and Democrats in Congress favored doing more to strengthen job growth but were unable to do so in the face of Republican opposition. That would have further improved the manufacturing numbers. This emphasis on macroeconomic differences echoes Bartels' analysis, which identifies Democratic "Keynesianism" and the contrasting Republican focus on inflation as the key policy difference driving disparate patterns of income growth under Republican and Democratic administrations.

A second policy area of importance to manufacturing is trade, including exchange rate policy. Here there is not as much distance between the parties -- both of which have supported free-trade agreements while also periodically using trade law to protect particular industries. (The two most prominent examples of the latter occurred under Republican presidents: the Voluntary Restraint Agreements negotiated in the auto sector under President Reagan, and the steel tariffs established in President George W. Bush's first term). Both parties have also been reluctant to unilaterally or through negotiations lower U.S. exchange rates with key manufacturing trading partners, with the most substantial of such efforts (the 1985 Plaza Accord with Japan, Britain, France and West Germany) coming on Republican watch. One question worthy of further study is whether domestic macroeconomic policy more focused on fighting inflation also contributes to raising the value of the dollar, increasing manufacturing imports and lowering exports under Republican presidents.

A third policy area is manufacturing or "industrial" policy. Presidents Clinton and Obama have been supportive of policies aimed at helping U.S. manufacturers become more productive (for example, through funding for "Manufacturing Extension Partnerships" patterned conceptually after agricultural extension technical assistance that helped make U.S. agriculture the most productive in the world). The auto industry bailout opposed by most Republicans, the Obama Advanced Manufacturing Partnership announced in 2011, and Recovery Act efforts to stimulate green and other advanced manufacturing sectors are recent examples of Democratic support for manufacturing-specific policies.

Whatever the explanation for these manufacturing employment trends, the record is clear: Democratic administrations have sustained American manufacturing employment better than have Republicans -- in good times and in bad, across a long history of secular decline in U.S. manufacturing as a share of the overall workforce. On balance, considering bipartisan agreement on trade and the relative weakness of industrial policy, it might be more accurate to say that Democrats have not done enough to aid manufacturing but that their policies have done less damage than those of Republican administrations.

No doubt, questions remain about how to interpret these numbers. But we think that, at a minimum, voters have a right to know the manufacturing jobs score is and to draw their own conclusions about what it means in this year's election and for the future of manufacturing.

*For a figure based on Bartel's analysis, see the figure in a Paul Krugman blog online. For a table with Bartel's data and a brief description of his method click here.

Colin Gordon is a professor of history at the University of Iowa and senior research consultant at the Iowa Policy Project.

Stephen Herzenberg is an economist and the Executive Director of the Keystone Research Center. He's the author of New Rules for a New Economy: Employment and Opportunity in Postindustrial America.

This story originally appeared on Alternet.