Even though the unemployment rate remained flat at 9.6 percent in September, the labor market would now need to add a total of about 11.5 million jobs to restore the pre-recession rate, according to analysis from Heidi Shierholz, an economist with the Economic Policy Institute.

The economy lost about 95,000 jobs last month, including temporary Census workers. Not including Census positions, roughly 18,000 jobs were lost, as the private sector addition of 64,000 jobs couldn't offset the 83,000 jobs cut by state and local governments, whose unusually severe deficits have lead analyst Meredith Whitney to predict that the next major financial crisis will come from municipal debt defaults. The state and local cuts included 58,000 teaching jobs.

The true numbers could be even worse. As HuffPost's Shahien Nasiripour notes, the reported numbers of jobs lost in July and August were revised up after the initial reports. 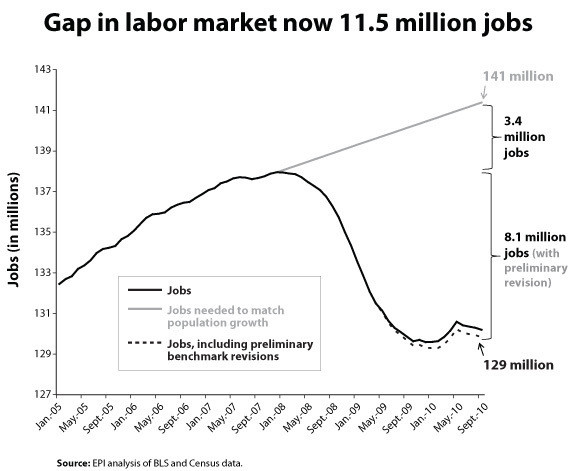 That's a huge number, and population growth continues to make it bigger. To fully recover in five years, Shierholz says, the country would need to add 300,000 jobs "every month for that entire period."