Friday's jobs report was generally pretty good news. The jobless rate dropped to a six-year low of 5.6 percent. And the December hiring data capped off the best year for the job market in 15 years.

But unfortunately, it's still nowhere near where it needs to be.

According to recent analysis from the nonpartisan Economic Policy Institute, the U.S. economy is missing about 5.6 million jobs. That's the number of additional jobs there would be if the economy regained all jobs lost in the recession and the job market kept pace with the natural increase in job seekers.

"Each year, the population keeps growing, and along with it, the number of people who could be working," Elise Gould, a senior economist at EPI, wrote in a blog post. "To get back to the same labor market we had before the recession, we need to not only make up the jobs we lost, but gain enough jobs to account for this growth."

The chart below illustrates where we are today (the red line) versus where we should be (the dark blue line). 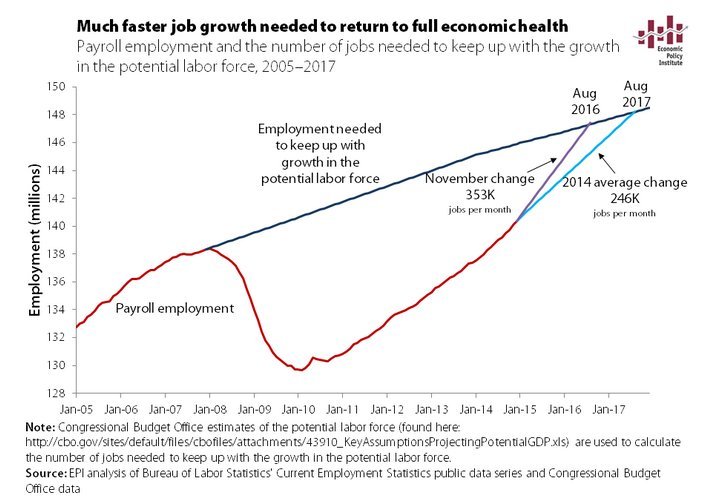 As the chart above shows, we are still years away from a fully recovered job market.

If the economy continues to expand at a rate of 353,000 jobs per month -- that's the number of jobs added in November 2014, which was the best month for job growth last year -- the job market will be fully recovered in August 2016, as the purple line shows.

If the job market improves at the same rate it did last year, adding an average of 246,000 jobs per month, the labor market won't be fully recovered until August 2017, as the light blue line shows.

Of course, even if the economy gets to full employment, that still doesn't account for weak wage growth. In December, average hourly wages fell 5 cents.