After Friday's grim jobs data, which showed that the U.S. added just 39,000 net jobs in November, it's worth noting again just how severely the recession has impacted the job market.

This disturbing chart -- repeatedly referred to as "the scariest job chart ever" by Henry Blodget -- from Calculated Risk shows, in percentage terms, how the job market has failed to rebound at the rates seen after previous recessions. "This is by far the worst post-WWII employment recession," Calculated Risk notes.

With 15 million officially unemployed, the job situation may actually be worse than the headline figures. As HuffPost's Peter S. Goodman noted, some 17 percent of Americans couldn't find enough work or had given up looking for work in November. Among black Americans the unemployment rate hit 16 percent, compared to 9.8 percent nationally.

All of which makes it even more troubling that 4 million Americans are set to lose unemployment benefits even if Congress passes an extension to the 99-week limit, as HuffPost's Shahien Nasiripour reported last week. As millions of Americans lose a crucial source of income, the economy is sure to suffer as a result.

The social costs of a mass lapse in unemployment benefits could be even more devastating. "Look for homelessness to rise and food lines to get longer as we approach Christmas if the situation can't be resolved," Diane Swonk, chief economist at Mesirow Financial, told the AP.

Check out the chart below -- and check out Calculated Risk for more information: 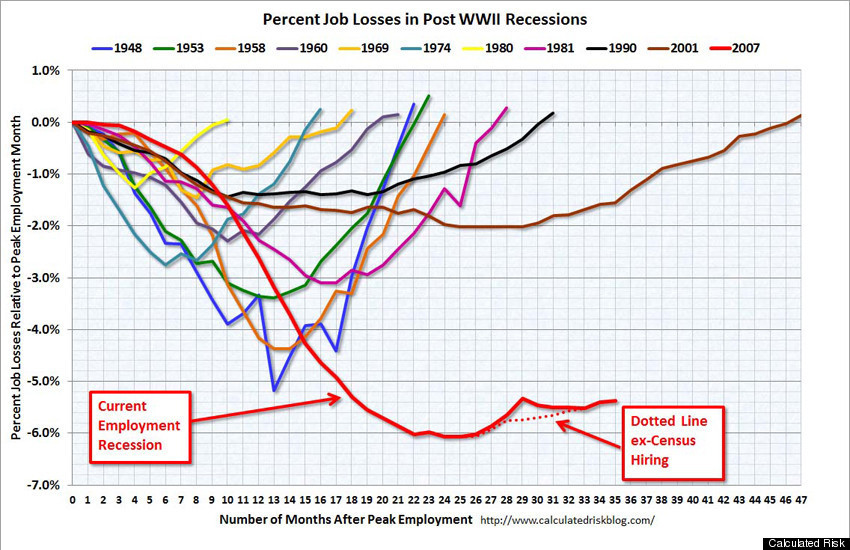