The reaction to January's jobs report shows how tragically our expectations have fallen, especially among some Democrats and their supporters. Their cheerleading isn't just bad policy or bad politics, although it is both of those things. It's also callous and insensitive to the misery of millions.

It's important to keep explaining what needs to be done to end that misery. To do otherwise is to serve, however unintentionally, an insidious agenda from the right that would lower our expectations until these tragic levels of unemployment are seen as the "new normal."

An increase in jobs is a good thing, of course, even if it's far from what's needed. Here's something else that was good about the report: Conservatives keep telling us that manufacturing jobs have moved offshore permanently, but 50,000 of them were created last month. Now we can put that argument to bed and can get to work creating more of them.

The Good, the Bad, and the Urgent

But millions of Americans -- including minorities and the young -- have already endured years of catastrophe, with years more to come if nothing is done. Why won't more people express support for their plight and explain what needs to be done to help them?

Here's the real story: Government intervention has created millions of jobs. But those interventions were too small, so we're still years away from fixing the problem. To claim anything else is to reinforce the delusions that created the problem in the first place.

If the president and his supporters make that case clearly and forcefully, the country will be able to choose between competing visions in November. It's more likely to choose an end to its misery. The pitch is pretty simple, really: The medicine's working, but let's not stop before the patient gets well. And despite this month's report, the patient is still very, very sick.

There would be room for celebration -- cautious celebration -- if we were protected from more economic shocks, which could come at any time from our under-regulated and too-big-to-fail banks. But we're not. Or if the Republicans and 'centrist' Dems (including the president) weren't pushing to cut government jobs, which will slow the rate of growth even more. But they are. Or if the president were pushing for bigger initiatives, on the scale that's really needed, while making the case for the kind of short-term help we need to get this country on its feet again.

The president's current jobs proposals would help somewhat, but they're still much too small. What's more, they're filled with policies that are too easy for Republicans to poke holes in. Unless he comes up with a bolder, simpler, and stronger plan, Republican rhetoric will regain a credibility it doesn't deserve -- and the government solutions that have always worked in the past will be discredited through half-measures that fail to solve the problem.

If that happens, our abnormal level of pain really will become the "new normal."

This month's reported unemployment level dropped to 8 percent for adult males. But women gained only 89,000 jobs, which is a little more than a third of the total. (They got 42 percent of the jobs in the private sector, but were heavily affected by government cutbacks brought on by misguided austerity thinking -- thinking that the president has sometimes encouraged with his rhetoric.)

The seasonally adjusted white unemployment rate for January was 7.4 percent.

For African-Americans, it was 13.6 percent.

For young African-Americans, it was 38.5 percent.

To be clear, all of those numbers have seen some reductions. But those who say the current pace of recovery is acceptable are also saying that a devastating job situation for young people, African-Americans, and those who are both, is an acceptable state of affairs for years to come. That means untold harm to human wellbeing, career opportunities, future health, lifetime earnings, and entire communities across the country.

It also means endorsing a state of "economic apartheid" that's unlikely to change for the foreseeable future. That's not the kind of country that the Democrats or their supporters should be tacitly endorsing, even if only by failing to consider the long-term consequences of what's being done and said today.

And in an equally devastating finding, long-term unemployment figure was still 5.5 million. These Americans have been thrown from a life of earning and security into hopelessness and spiraling poverty -- and they're being ignored.

The numbers tell another story, too: People with jobs are falling behind. That's why the middle class really is in a process of slow decay. This chart tells the story: 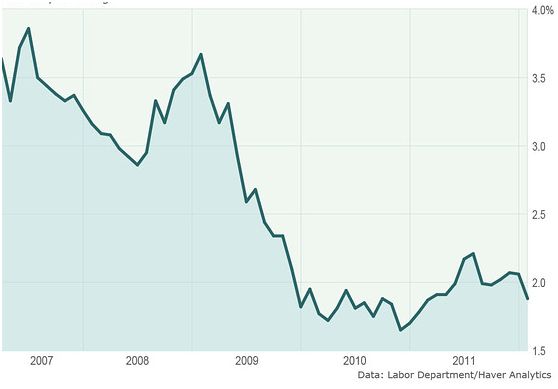 After a period of long-term stagnation, wages only grew by 1.9 percent and there's no sign that will change. There are lots of working people who will find nothing to celebrate in this report.

Nevertheless, a number of Democrats and allies took a premature and ill-considered victory lap Friday. That won't help the country get the policies it needs, and it won't help them politically either. When sympathetic writers like the one quoted by Ezra Klein write of "champagne corks popping at the White House," the image seems inappropriate at best and Marie Antoinette-ish at worst.

The president, his party, and their allies need to send a clear message about these job numbers: that they disprove the conservative argument, but that whole segments of the population were left out of the good news and we're facing many years of pain and stagnation unless government steps up its efforts.

That means they must face facts and make the only argument that will resonate with the American people: That what president and his party have done has helped, but not nearly enough, and that what he is proposing will also help, but not nearly enough. His job creation proposals will be blocked by the Republicans either way, so why not use them to tell the American people what needs to be done?

The president has learned a lot, politically and economically, from the pressure he's received from the left. He's getting better at making the rhetorical case for economic justice. Now he needs to get better at losing, by losing congressional battles with a set of solutions that the public will understand and support. It's incomprehensible that Republicans would oppose a jobs bill for veterans, but they will.

But it's equally incomprehensible that a Democratic president would offer small responses to such a large disaster. (I include the Jobs Act in the category of "small responses," since such a large chunk of it is dedicated to ineffectual tax cuts for business. But it would help.)

And it's a measure of our mad times that CNN is able to call the proposal for veterans' employment as "hefty" with a straight face. At these levels of unemployment, its estimated $5 billion price tag is almost homeopathically small.

Some people are talking about a "recovery winter," an ironic reference to the administration's premature declaration of "recovery summer" in 2010. For too many Americans, "recovery winter" feels like more like nuclear winter.

The young people and minorities who weren't invited to the party last month can feel it. What's more, this good news could shift dramatically in coming months -- if Europe collapses, if a major U.S. bank goes down, or if the periodic recessionary cycle that's built into our under-regulated system strikes again this year.

Klein is right when he says that revised figures for earlier periods "are positive," at least where jobless figures are concerned. But adjusted population figures added 1.7 million people to the workforce, which means we need even more growth -- and quickly. It means that overall labor force participation is at the unacceptably low level of 63.1 percent.

Klein correctly cites most other areas of concern, including lost public sector jobs and the gap between needed job growth and current figures. But he writes that "this isn't just a good jobs report. It's a recovery jobs report." He couldn't be more wrong, in my opinion -- unless he's talking about a recovery in 2019.

And I hope Democrats don't listen when he calls these results "the sort of numbers that win elections." Current projections show unemployment rising to 9 percent again before November. This lagging recovery will give credibility to the president's opponents while discouraging his opponents, especially young people and minorities.

Steve Benen of the Maddow Blog understands what's going on behind the figures, yet still says "it's hard not to feel good about the surprising strength" of this report -- a sentiment that few of the long-term unemployed would share. Jamelle Bouie of the American Prospect called the report "blockbuster" and said "the economy is looking good."

All this cheerleading feels more than a little unseemly in the face of so much misery -- especially when the misery's likely to continue for years if more isn't done.

Some media types might want to be more cautious, too. A headline writer for McClatchy, which has often distinguished itself with terrific financial reporting, missed the mark by writing "January jobs report sizzles..."

The body of McClatchy's article is much more accurate and objective, correctly noting that the figures were "better than expected" and quoting everyone from a market analyst who cheerleads the numbers for different reasons, to the president and House Speaker John Boehner. But the title's pure hype -- unless they meant "sizzle" as in that old expression about "separating the sizzle from the steak."

It's time for Dems and their allies to stop partying like it's 2019.

It's not hard to strike the right balance between encouragement and admonition. Alan Krueger, chairman of the President's Council of Economic Advisors, came close. "It is critical that we continue the economic policies that are helping us to dig our way out of the deep hole that was caused by the recession that began at the end of 2007," wrote Krueger, who called the report "an encouraging sign."

That wasn't hard. Jared Bernstein struck the right balance, too, calling on Congress to "seal the deal" and saying "let's not screw this up." (Although I wish he had explained what a full recovery plan could do.)

The Republicans struggled to respond Friday."These numbers are encouraging," said Eric Cantor, "especially for those millions of Americans out of work, but we should aim even higher."

Great, the president should say. I'll take you up on that.

The right message is clean and simple:

2. So let's stop the bleeding of public jobs. We've seen the damage that's caused in Europe and we don't want that here.

3. The deficit is a legitimate concern -- after we address today's crisis with "the fierce urgency of now."

4. The best way to cut deficits in the long term is to put Americans back to work so they can pay their taxes and buy things that create even more jobs.

5. We tried to compromise with our opponents, because we thought they'd be reasonable. They weren't.

6. So here's what it takes to get that done, with no games or pretense. Let's go to work, and if the Republicans won't help, please vote for people who will.

See? The right message is simple, clean, honest, and easy to deliver. It's cheap, too: No champagne corks necessary.