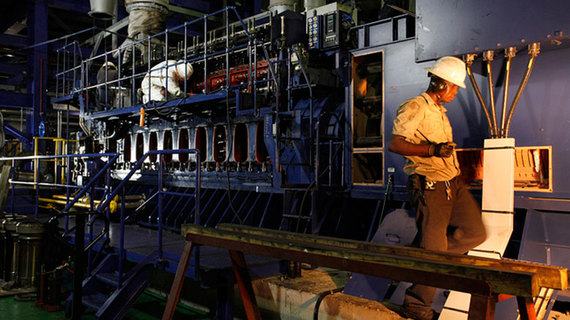 A worker at the E-Power plant in Port-au-Prince, Haiti. © Dominic Chavez/World Bank

For the first time in history, the number of people living in extreme poverty has fallen below 10 percent. The world has never been as ambitious about development as it is today. After adopting the Sustainable Development Goals and signing the Paris climate deal at the end of 2015, the global community is now looking into the best and most effective ways of reaching these milestones. In this five-part series I will discuss what the World Bank Group is doing and what we are planning to do in key areas that are critical for ending poverty by 2030: good governance, gender equality, conflict and fragility, preventing and adapting to climate change, and, finally, creating jobs.

Good jobs are the surest pathway out of poverty. Research shows that rising wages account for 30 to 50 percent of the drop in poverty over the last decade. But today, more than 200 million people worldwide are unemployed and looking for work - and many of them are young and/or female. A staggering 2 billion adults, mostly women, remain outside the workforce altogether. In addition, too many people are working in low-paying, low-skilled jobs that contribute little to economic growth. Therefore, to end poverty and promote shared prosperity, we will need not just more jobs, but better jobs that employ workers from all walks of society.

Where to start? Productivity-driven, private sector-led growth is the cornerstone of job creation in all countries, but it's especially challenging to achieve in the world's poorest countries. Three factors are critical for the private sector to create more productive employment for the poor. First, people and firms need to be connected to market opportunities through infrastructure such as roads and electricity.

A recent study in India shows that building roads to villages increased the number of people moving from agricultural work to higher-paying jobs by 10 percent. Large-scale investments in transportation, power, and telecommunications lay the foundations for competitive, job-creating firms, and drive both productivity gains and economic transformation.

Infrastructure is particularly critical in conflict-affected and fragile countries. For example in Myanmar, where 84 percent of households in rural areas don't have access to electricity, the World Bank Group is helping to double the output capacity of a natural gas-fired power plant. Once completed, the project will mobilize $300 million in private financing and be the country's first independent power producer.

But most importantly, it will improve services for 1.5 million people, helping them to start or expand businesses or get jobs.

Second, countries need to build and leverage skills and assets to raise productivity and earnings.

Connecting firms to markets and people to jobs is a good start, but not enough. For people to escape poverty, they need to be able move to more productive jobs. Investing in education and health is important to build the skills that give individuals the flexibility to adapt to new and increasingly technologically advanced job environments.

In Afghanistan, improving the quality of the country's technical and vocational education system will help increase the number of graduates from certified institutes from just over 1,000 to about 9,000 over the next year. As of 2015, close to 26,000 people have benefited from this Bank-funded project to develop job skills and increase incomes in a very challenging environment. Similarly, small and medium-size enterprises must improve their productivity. They need access to finance to expand and develop their workforce. A recent study shows that small businesses with access to finance generated up to 4 percent more employment than firms without access. In Ethiopia, improving the capacity of key institutions supporting the tourism sector helped train more than 1,600 professionals, created over 5,000 jobs in the tourism industry, and led to a 30 percent increase in international tourist spending.

Firms also need to strengthen their capacity to take advantage of new technologies and innovations--including those that fortify links to value chains. An all-women enterprise in Bamyan Province, Afghanistan, found success in the potato chip business with help from a program strengthening market linkages and value chains for rural enterprises across the country. The program has provided technical support to 500 small and medium business and over 1,400 enterprise groups- two-thirds run by women --and generated employment opportunities for 12,000 people in the process.

Development assistance will remain critical to foster the environment in which people and whole societies can move out of poverty. But it won't be enough to achieve the ambitious development goals we have set ourselves. A productive private sector that can operate on a level playing field will be key to create the number of productive and well-paying jobs it takes to end poverty.