The growth rate of U.S. exports to the countries with whom we do NOT have Free Trade Agreements (FTAs) has been over double that to U.S. FTA partners. That stunning finding should put an end to recent Obama administration talk about reviving three NAFTA-style FTAs leftover from the Bush era. And, it should provide impetus to finally implement President Obama's campaign commitments to renegotiate aspects of the past FTAs, and create a new American trade pact model going forward.

The core justification for FTAs like NAFTA and CAFTA is that they boost exports. Yet Public Citizen's recent study "Lies, Damn Lies and Export Statistics," analyzes the actual government trade flow data. It showed that, if exports to the 17 U.S. FTA partners had only grown as much as exports to the rest of the world, the U.S. would have had an extra $72 billion in exports over the past decade. Check out this stunning graph: 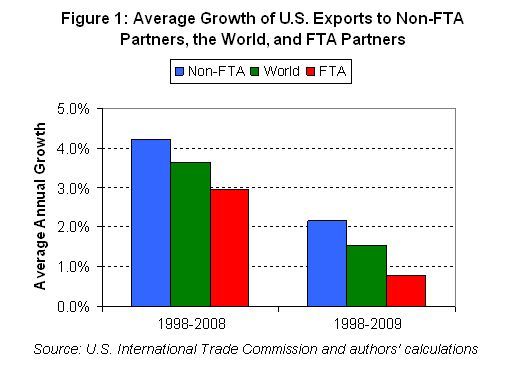 Yup, U.S. FTAs resulted in a relative export penalty! Not only did U.S. manufacturing exports grow faster with non-FTA countries, but so did service sector exports. And, we have a substantial agricultural trade deficit with our FTA partners, contrary to the sales pitch about the supposed gains for our heartland farmers.

That is Exhibit # 1 for why reviving the Bush NAFTA-style FTAs with Korea, Colombia and Panama should not be part of the administration efforts to double U.S. exports over the next five years and create two million U.S. jobs.

Exhibit #2 is more well known, although recent corporate reports have tried to distort the reality that the U.S. has suffered large and growing trade deficits with its major FTA partners and with the group of FTA nations as a whole. Even as trade flows declined because of the economic crisis, as of 2009, the new report shows that the United States had a $54 billion trade deficit in goods, excluding oil, with its 17 FTA partners. The president cannot achieve net U.S. job creation through export growth if he implements more FTAs that increase imports more than exports.

Unfortunately, the 28 titans of the pharmaceutical, financial service and other industries that dominate the President's Export Council did not display such candor or attention to the actual data in their first meeting this week. On the top of their list, was... well, what has always been on their list: more job-offshoring FTAs - although now repackaged as helping the president's export initiative. The White House also released a progress report that highlighted the festering Bush FTAs as a tool to boost exports.

In our job-starved economy, no one disputes the need to increase exports. But the data is in: There are many ways to expand exports, but pushing more of the same NAFTA-style trade agreements is not on the list.

You're not likely to hear corporate lobbyists cop to the demonstrated failure of the FTAs they worked so hard to pass. In fact, the Public Citizen report goes through a scandalous assembly of errors and suspect methodologies used by corporate groups like the Chamber of Commerce and National Association of Manufacturers to generate numbers to support their FTA advocacy. These range from bad arithmetic, to ignoring inflation, and more. This section of the report is quite an astonishing read.

A personal favorite: In order to get wild FTA gains, the Chamber averaged export growth averages to FTA countries like Morocco without weighting their overall importance to our trade. (So, increasing exports to Morocco from $0.6 billion to $1.6 billion after the FTA is counted as a 167% gain despite the nominal gain effectively being a rounding error in the total U.S. exports of over $900 billion.) Then, this inflated export growth data for FTA countries is compared to data for non-FTAs that was generated using a different methodology that weights trade volume. Needless to say, this "apples and oranges" comparison biases the findings to meet their lobby pitch. But the funny-slash-sad thing is, when you utilize their unweighted methods consistently - the FTA export penalty actually is eight times larger than Public Citizen's finding!

Another doozy is that a corrected version of their methods finds that the U.S. would lose out on $30 billion in exports over the next five years if Bush's FTAs with Korea, Panama and Colombia are signed. The uncorrected numbers claiming export gains from those pacts are being widely cited to push these pacts.

Okay, so on economics and job creation, it's clear that the Obama administration should not be taking up Bush's FTAs unaltered. But the political case for instead pursuing fair trade policies is just as clear. As the Wall Street Journal reported earlier this week,

"With polls showing the party losing crucial working-class voters in dozens of House districts and broad disapproval of the Democrats' economic agenda in Washington, strategists now see trade as their most effective weapon in minimizing election losses."

President Obama himself knows the political value of fair trade, having campaigned and won key swing states in 2008 by promising to sweep away the NAFTA model.

In short, in the name of both expanding U.S. exports and saving U.S. jobs (including those of the Democratic Majority-makers in the U.S. House), President Obama should pour a healthy dose of salt on corporate entreaties to pass Bush's trade deals and instead make good on his fair trade campaign pledges.